Now that Secret Service super-agent, Mike Banning has no doubt run out of international terrorists to kill, particularly after the world leader-massacring events of 2016’s London Has Fallen, the only hazards left for his world’s U.S. Presidency seem to be coming from within. Such is the premise behind the third movie in the remarkably resilient Fallen series of action movies, which started in 2013 with the surprisingly entertaining Die Hard knock-off, Olympus Has Fallen, and continued on with the aforementioned London Has Fallen, which mostly stayed on the same gear, being enjoyable enough, but also twice as ridiculous as its predecessor was. It will likely come as no shock to you then that Angel Has Fallen delivers that same simple action movie fix, despite the efforts to once again mix up the premise just enough to stand apart from the prior two movies. 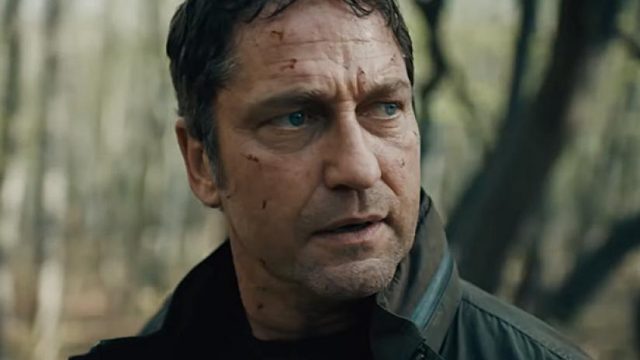 Even with this latest story mix-up however, Angel Has Fallen ironically goes back to the Die Hard playbook, namely the third movie of that franchise, Die Hard: With A Vengeance, wherein the formerly unknown hero suddenly has to start living up to the legend of his former exploits, after he becomes directly targeted by those involved with the latest major terrorist event of that universe. Sure, in the case of Angel Has Fallen, this is once again done through the lens of a U.S. Presidential administration that is far more romanticized and noble than the one we’re currently stuck with in the real world, but if you’ve already enjoyed the prior two terrorist-spanking endeavours of Gerard Butler’s Mike Banning, there’s no reason to doubt that you’ll also enjoy the third go-around too, even if it’s also not elevating the franchise to any truly exciting new territory.

Gerard Butler returns to what is astonishingly his most iconic role since 300’s King Leonidas, that being U.S. Secret Service agent, Mike Banning, who is now finally enjoying a quieter existence after the events of the previous London Has Fallen. With Morgan Freeman’s President Allan Trumbull considering Banning for a promotion to a desk job, Banning finds himself trying to come to terms with leaving the field behind, now that he’s coming up to his 50’s. Clearly, this isn’t meant to be however, since we need our action movie sequel. Thus, fate naturally intervenes once Banning reunites with his old friend, Wade Jennings, a former U.S. Ranger teammate of Banning’s, who now runs a private military company. If you think you’ve figured out the main villain of this sequel, then congratulate yourself for still having working brain function.

Nothing requires much thought in Angel Has Fallen, but I doubt this will surprise established fans of the series, who are no doubt just fine with an acceptably decent action movie to wind down the last of the Summer weeks with. Even the efforts to delve more into Mike Banning’s family life and history feel boilerplate and unremarkable in this follow-up, despite the high-profile introduction of a hilariously memorable Nick Nolte as Banning’s harshly anti-government hermit father, Clay Banning. There’s some good-natured father/son ribbing between Butler’s and Nolte’s characters, no doubt a reflection of Angel Has Fallen’s target audience of old-school action movie enthusiasts, but Butler’s and Nolte’s innate chemistry definitely works far better than what the script offers here.

Leah Banning, Mike’s wife, has also been recast in this third outing, with Radha Mitchell now being replaced by Piper Perabo. Perabo does well enough in the role, but the recasting is ultimately moot, since Leah has even less to do in Angel Has Fallen than she did in the former two movies. Instead, much of Angel Has Fallen’s personalities are dominated either completely by action, completely by patriotism, completely by quips, or completely by some other by-the-book action movie cliche, with the entire supporting cast feeling practically inconsequential to the plot much of the time. Angel Has Fallen does make a token effort to somewhat address the current state of U.S. politics at least, namely through examining the shift toward private military contractors, and how capitalism has led to undue influence in the U.S. Presidential chain of command, but it’s all very surface-level commentary. In fairness however, you should know by the third movie that if you’re checking in with Mike Banning, you’re doing it for the undemanding thrills.

Angel Has Fallen does admittedly set out with a surprisingly distinct premise, at least when you put aside the fact that it’s once again aping Die Hard by having the third movie build itself around the growing reputation of its franchise’s protagonist. This time, rather than once again going bigger in the wake of an international-scale first sequel, Angel Has Fallen instead focuses inward by having Mike Banning himself become the target, namely by being framed for an assassination attempt against President Trumbull. Clearly, this is ridiculous, and the way that said assassination attempt is carried out in this movie (namely with a kamikaze squad of dive-bombing death drones, because it’s that kind of movie!), leaves no credible evidence whatsoever that Banning is behind the attempt, especially with no believable motive. Still, this is action movie land, so whatever, Banning is being framed for the villains’ obvious plotting. Cue sequel.

Like I said, the fundamental premise of Banning becoming a target for the series’ latest villains, now that he’s no doubt built quite a reputation as a deadly terrorist killing machine, is actually a pretty good one on paper. It also allows this sequel to land with a bit more gravitas and grit than its more over-the-top predecessor did. Still, while there’s nothing really wrong with the storyline of Angel Has Fallen per se, outside of why anyone would ever realistically suspect Mike Banning of being behind an assassination attempt on the U.S. President, there’s also nothing really exceptional about it. Like the two previous movies, the storyline of Angel Has Fallen represents a proud throwback action movie that delivers enough of a story conceit to justify a new batch of action sequences, but doesn’t offer anything else of note in the plotting.

Angel Has Fallen once again enlists a new director, in this case, Ric Roman Waugh. Waugh is best known as a former stuntman and stunt coordinator from throughout the late 80’s and the entirety of the 90’s. He’s also briefly dabbled in feature directing work before this, most notably with the forgettable 2013 Dwayne Johnson-led thriller, Snitch. Angel Has Fallen meanwhile feels like work-for-hire for Waugh, but to his credit, Waugh does manage to direct some pretty thrilling action scenes, particularly with the welcome emphasis on more close-quarters combat this time, in contrast to the more large and elaborate action set pieces that permeated much of this series’ previous offering, London Has Fallen.

Waugh clearly isn’t in this for the emotion, but he does know his way around old-school action movies, so his style appears to get the job done with Angel Has Fallen. The quips are amusing, the action is engaging and well-choreographed for the most part, and while most of the presentation of Angel Has Fallen is pretty unremarkable, it does work well enough as far as being a straightforward action movie goes. Those who found London Has Fallen a little too dopey and outlandish will also no doubt appreciate that Angel Has Fallen feels at least a little more grounded and timely, without betraying the fun, ass-kicking spirit of its two predecessors.

Angel Has Fallen is overall an improvement over London Has Fallen, managing to be comparably thrilling, but also a little more believable and gripping, albeit barely. The original Olympus Has Fallen is still the best offering that this series of action movies has delivered up to this point, but Angel Has Fallen is a close second, even if it’s still a pretty disposable, undemanding romp, particularly in a post-John Wick era. Still, even if it lacks the flash and sophistication of so many modern genre blockbusters, Angel Has Fallen delivers a good time for action movie fans, and isn’t too fussed with the details beyond that.

Like its main character however, Angel Has Fallen nonetheless feels indicative of a franchise that would have kicked a lot more ass a couple of decades ago. It’s still plenty entertaining in 2019, and there’s something to be said about how Hollywood doesn’t make them like this anymore, but in shirking the many modern upgrades of the action movie genre, Angel Has Fallen thus fails to truly stand out from the competition. It may still be a better movie than its predecessor, but it’s also tough to deny that the Fallen series is really starting to press its luck at this point. Mike Banning is clearly ready to retire from the field before his third terrorist-related snafu even properly gets started to boot, and that feels perhaps even more meta than the filmmakers intended. So, now that he’s completed his rite of passage as an unlikely action movie franchise personality that has had to stand strong amid his own legacy, maybe it’s best that we finally let Banning hang up his guns. He’s earned it.

Angel Has Fallen Review
Angel Has Fallen improves on its predecessor with its grittier, more personal scale, but it's still disposable and undemanding by the standards of modern action movies.
CHARACTERS65%
PLOT65%
DIRECTION70%
THE GOOD STUFF
THE NOT-SO-GOOD STUFF
2019-09-11
67%Overall Score
Reader Rating: (0 Votes)
0%