The two-part storyline that sees the violent clash unfold between the forces of Sarge and Izel comes to its action-packed conclusion in, “Collision Course (Part II)”, an episode that oddly feels like it could have functioned as a season finale, despite four episodes still remaining for Agents of S.H.I.E.L.D.’s sixth season. Regardless, there are plenty of thrills as the current story arcs of Season Six start coming to a head, as Fitz and Simmons keep desperately trying to make contact with Earth, Sarge takes a last desperate stand against S.H.I.E.L.D., and Daisy, May, Deke and Snowflake all frantically try to disarm the bomb that’s threatening to obliterate all of them, even if this could take the Shrike down with them.

There are no shortage of exciting story developments in this episode, and fortunately, most of them proceed to very thrilling effect! It’s a little disappointing that Mack’s big call doesn’t end up amounting to much in the end, since he more or less doesn’t make a decision before Sarge ends up intervening in the situation anyway, but at least the following stand-off makes for a very tense and unpredictable challenge for the heroes. With Sarge getting the upper hand again, and even setting up a disintegrating force field so that Yo-Yo can’t easily save everyone with her Inhuman powers, Mack has no choice but to acquiesce to Sarge’s demands, leaving the rest of the S.H.I.E.L.D. crew forced to deal with the nuke that’s on Sarge’s rig by themselves! 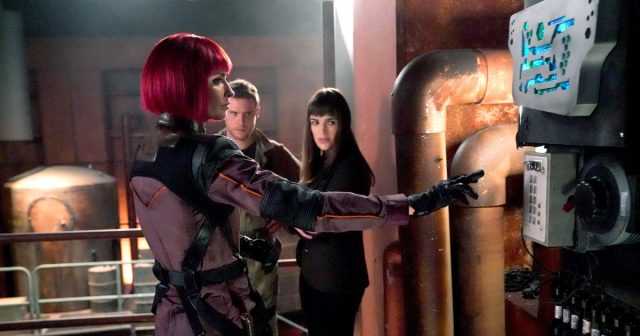 Fortunately, this apparent no-win scenario also results in plenty of thrilling excitement, as Sarge’s truck prepares to plow through the Shrike’s crystalline tower. With Deke ultimately helpless to disarm the bomb, it appears to be the end for the S.H.I.E.L.D. crew on the rig, though Daisy manages to suspend the bomb in vibrations as the truck plows through the tower, releasing a huge swarm of Shrike into the air! Obviously, the show’s lead protagonists (and Snowflake) were going to survive, though Daisy being an unrealistic Deus Ex Machina with her own powers did stink a bit of the show writing itself into a corner with the former episode’s cliffhanger. The same is true of the Shrike swarm in fact, who are initially held off by a series of barricades, before Daisy simply opens one of the truck doors and vaporizes all of them. Seriously? If the Shrike were that easy to dispatch, then why even bother with the barricades? Again, it really felt like the show wrote itself into a corner with the rig subplot, and simply contrived Daisy’s powers to the point where she could resolve everything single-handedly.

Obviously, Izel can’t keep up the veil of trustworthiness on the spaceship either, as Fitz and Simmons finally begin to notice in earnest that the crew of the ship is acting very strangely. They quickly identify Izel as the cause of the strange behaviour, but Izel nonetheless corners them before they can do anything, demanding that they get in touch with ground forces, or get that higher purpose that she promised them before. This seems a bit weird at first, considering Sarge’s account that Izel simply wants to destroy everything, but regardless, Fitz and Simmons keep fiddling with the machine, managing to get it working well enough to make contact with the Zephyr, the very same Zephyr that Sarge is now holding up. Simmons does manage to confirm hers and Fitz’s presence on the ship too, ensuring that Mack won’t destroy it, and Yo-Yo even manages to sneak a key to Mack’s handcuffs as well, with some inadvertent help from Pax.

It’s here where the episode’s thrills really reach their peak, especially with the Sarge stand-off. After Yo-Yo has Pax bounce off of the force field, resulting in Pax being injured, Sarge simply shoots Pax dead, disturbing Jaco greatly. Granted, Pax wasn’t really a huge part of the show, but his murder does seem to provide some necessary motivation for Jaco to defect to S.H.I.E.L.D.’s side, particularly after Yo-Yo reminds him what he’s fighting for. With Mack thus free, Mack knocks Sarge out after a pretty good fight on the Zephyr’s bridge, and this allows Mack, Yo-Yo, Jaco and Davis to go up to Izel’s ship, where they discover the infected crew. This provides one last extended action sequence that works pretty well, with the rescue of Fitz and Simmons ultimately being successful, and everyone exploiting one of those Sarge portals to get back to the rig and reunite with everyone else. Jaco then decides to sacrifice himself by taking the bomb onto the spacecraft and blowing it up, dealing with the Shrike-infected crew, even at the cost of his own life. I’m not sure why Jaco couldn’t have just tossed the bomb in, since it apparently detonates with even a brief jostle on the ground, so his sacrifice is a little unnecessary, but I guess the show had no further use for his character, so whatever.

With Izel and the Shrike seemingly defeated, and Sarge in custody, it seems like S.H.I.E.L.D.’s and the planet’s latest troubles are now over. The S.H.I.E.L.D. crew has a party as a result, allowing everyone to catch up, including Fitz once again meeting his grandson, as Deke enthusiastically shares his company photos with, “Bobo”, much to Fitz’s confusion. Daisy also offers Mack a debrief regarding what she’s been up to for the past year, again failing to address whether Thanos’ snap is still a thing in this MCU timeline. You’d think that this would be a perfect spot to potentially tie into the time-traveling plot of Avengers: Endgame, and identify whether the Monoliths’ time travel works differently than the time travel of the Quantum Realm, but alas, that doesn’t happen. At least we get a nice reunion for all of Agents of S.H.I.E.L.D.’s leads regardless though. 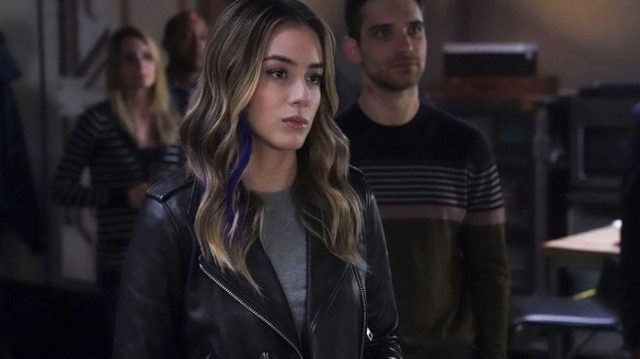 Wherever and however the current season of Agents of S.H.I.E.L.D. ends up fitting into the MCU’s current post-Avengers: Endgame canon, the fact remains that the current conflict for the show comes to an exciting and mostly satisfying conclusion in, “Collision Course (Part II).” Things are tied up pretty neatly, with Sarge (and now Snowflake) being successfully imprisoned, the Shrike appearing to be destroyed (even if Izel currently remains unaccounted for), and S.H.I.E.L.D.’s core crew now having come back together successfully. It feels like a long, strange journey, even by the standards of this show, but four episodes nonetheless remain in the current season, so the trouble facing Earth certainly isn’t fully quelled yet. This becomes apparent once May bursts into Sarge’s cell and seemingly shoots him dead, in a pretty intense epilogue sequence that could indicate that May has gone rogue in the wake of the season’s events, or is perhaps being controlled by some other force. Either way, we’ll have to see if Izel has a contingency plan for Earth, since she officially seems to be the only current threat to the planet left on the board.