NOTE: Full spoilers for this episode of, “Agents of S.H.I.E.L.D.”, including a major character death, and the true identity of Sarge, are present in this review

The dark crystalline Shrike tower may have been stopped, and Earth may well be safe for the time being, but that didn’t appear to stop May from shooting Sarge dead in the closing moments of the previous episode of Agents of S.H.I.E.L.D., leading to a compelling mystery that eventually gives way to a startling revelation of just what Sarge is, and where he came from. “Leap” thus initially presents a very harrowing threat, one that puts the S.H.I.E.L.D. base on lockdown, when it’s inevitably discovered that May was not directly responsible for her actions. Even if this promising premise can’t totally see this concept through to its full potential as well, the questions about Sarge finally being answered nonetheless presents a thrilling payoff, one that immediately leads into a new danger for S.H.I.E.L.D., and Earth at large!

After the S.H.I.E.L.D. crew starts pondering what caused May to snap, and in particular, use a gun, something that she hates doing, May eventually appears to come to, expressing confusion and horror that she apparently shot Sarge without realizing it. This turn was actually teased during the previous episode, when Davis appeared to suddenly pass out, despite also initially being the source of what’s going wrong at S.H.I.E.L.D. headquarters. Yes, it turns out that Izel can possess people, moving in and out of hosts as she pleases, leaving the host with no memory of what they’ve done while Izel was inhabiting them. This appears to be an extension of what the Shrike are meant to do, and the explanation behind how Sarge, Izel and the Shrike are all tied together is certainly a doozy, even by the standards of the Marvel Cinematic Universe!

Said mystery takes yet another interesting turn when it’s discovered that Sarge survived being shot three times in the chest, and once in the head to boot! Not only has he not died from his injuries, but Simmons also discovers that Sarge keeps gradually getting stronger, and eventually healing even mortal injuries! This definitively concludes that Sarge is not actually human, nor whatever he was supposed to be during his travels between other worlds, prompting Simmons to quickly stash Sarge’s ‘body’ away in the morgue. Eventually, Sarge does come to as well, urging to be freed so that he can finish what he started. This is moot anyhow though, because Izel is already in the S.H.I.E.L.D. base, moving between agents to re-secure what she’s after, and begin a new wave of Shrike with which to menace Earth.

It’s here that the episode presents its most interesting narrative hook; A chilling conundrum in the style of classic monster movies like The Thing, wherein one of the established agents on the show is actually the enemy in disguise. Eventually, the core S.H.I.E.L.D. crew do manage to devise a tell to root out Izel though, who doesn’t possess the memories of the host she inhabits, specifically by telling private secrets about each other, which can be corroborated by at least one other person. Daisy and Yo-Yo are quickly cleared, and placed into isolation, so that Izel can’t possess them and gain their Inhuman powers, which is a smart plan, though it doesn’t ultimately matter, since Fitz is soon after identified as Izel’s host. This was a little frustrating, since the episode could have spent a lot more time on the question of who Izel is hiding in. Nonetheless, the mystery has a pretty shocking payoff, as Davis ends up being dropped to his death as a show of force by Izel, before she escapes. Granted, Davis was never the most high-profile agent on this show, but the way he’s killed is still pretty awful, especially when he was one of the only crew members to stand by Daisy and Simmons during their initial mission to find Fitz in space at the start of this season.

Overall though, audiences are no doubt coming for the inevitable confrontation between Sarge and Izel, with Sarge eventually knocking out Simmons, and escaping to meet Izel in the Gravitonium device chamber, where the fear dimension originally sprung from during last season. Izel is waiting for him there, with Sarge determined to kill her, only to find that his bullets are also completely ineffective against Izel. It’s here that we finally learn just what Sarge is, and how he’s connected to Coulson, and the answer is pretty interesting too! It turns out, when Coulson went in to shut down the rift believed to be causing fear manifestations during last season, the rift wasn’t actually caused by another dimension, but by the scattered energy of the destroyed monoliths, namely the third formerly unidentified monolith, which can create living beings. With the three monoliths being destroyed, and being exposed to Coulson in the process, they essentially made a facsimile of Coulson that was sent across time and space, with only fragments of memories relating to Coulson’s past, which is why Coulson believes that he’s out to hunt and destroy Izel.

This was a thoroughly bizarre and unexpected explanation as to where exactly Sarge came from, but apparently, he’s actually part of the same non-corporeal monolith-based species as Izel, with Sarge’s actual name being revealed as, “Pachakutiq”, both the same ominous word that kept coming up in Marcus’ research, as well as the mysterious word declared by Tinker before he finally died for good. This officially brings every element of the Sarge mystery into focus, along with Izel’s ultimate plan for Earth; Using the Shrike to give corporeal form to the other members of Sarge’s and Izel’s species, and making Earth their new physical home, at the cost of humanity! Sarge still refuses to join Izel, despite this revelation, but Izel nonetheless has the upper hand, after Yo-Yo willingly allows herself to be possessed, forcing Mack to accompany her during her escape from the base. The S.H.I.E.L.D. crew is thus left to try and find a way to get their director back, and stop Izel, before she can do irreversible damage to Earth! 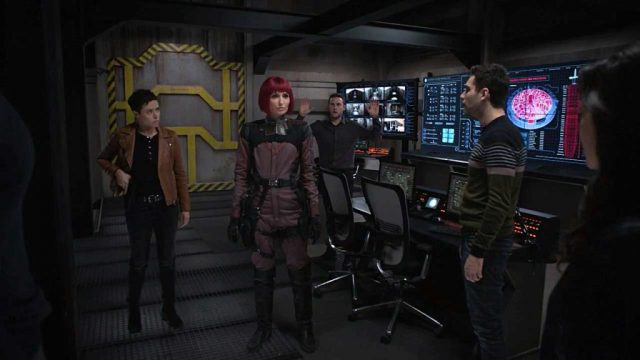 The episode then concludes with the true nature of Sarge’s powers manifesting, creating yet another obstacle that remains an active danger at the S.H.I.E.L.D. base. Fortunately, even if the Thing-style mystery hook felt frustratingly under-utilized, the creative and shocking secret behind Sarge, as well as the true agenda of Izel, nonetheless made for quite an engrossing storyline in, “Leap”, which yet again leaves Earth hanging in the balance. With Sarge quickly descending back into his energy-based form, one has to wonder if he’ll end up being an even bigger danger to S.H.I.E.L.D. than Izel in the short term, but Izel claiming that Sarge has the only means to destroy her also makes one wonder if Sarge will indeed be S.H.I.E.L.D.’s only hope of stopping Izel for good. Either way, it’s very cool to see the destroyed monoliths coming back to bite S.H.I.E.L.D. in the ass in a very unexpected way, particularly in not truly allowing them to fully move on from the loss of Coulson. There’s no time to think about the consequences of the monoliths’ destruction yet though, since Mack’s trusting his team to deliver. Now will be the real test to see if Mack’s truly risen to the task of being S.H.I.E.L.D.’s new shepherd in the post-Coulson era!