The earth-shattering twist that concluded Krypton’s previous episode naturally has far-reaching consequences in its follow-up offering. “In Zod We Trust” provides serious fractures to both sides of the battle between Val-El’s resistance and General Zod’s new Kandorian empire, as everyone reels from Jax publicly executing Lyta, which now plays on repeat in Kandor, with Zod having no way to stop the display of reprisal. The episode also confirms that Lyta is indeed dead as well. There are no tricks on display, and no treachery to try and force Zod’s hand. Jax really did cut Lyta’s throat, and she’s now a corpse, zipped up in a body bag upon Wegthor.

The fact that Krypton would openly kill off its core female lead is a very bold move, even with this being a DC show, where there are theoretically any number of ways that Lyta could eventually be resurrected, and returned to the series’ ensemble. For now though, pretty much everyone is emotionally distraught at Lyta’s death, with Jax and her co-conspirator quickly being imprisoned on Wegthor, while Seg, Jayna and Dev try to collect themselves, just in time to chance upon Nyssa, after she returns to Krypton from Wegthor. The reunion between Seg and Nyssa couldn’t have come at a better time as well, since this provides Nyssa the perfect opportunity through which to steal back hers and Seg’s son!

The way that the reclamation of Cor unfolds is also pretty awesome, again cementing just how far Nyssa’s character has come during Krypton’s second season, now that she’s free from her father’s shadow. With some help from Val, Nyssa tampers with the Codex to start, so that it can’t be activated by any voice other than her own, and will self-destruct if anyone attempts to tamper with it. After Nyssa takes out two Saggitari that are attempting to escort her to Zod as well (which is where she reunites with Seg, Jayna and Dev), the incident allows her to easily walk into Zod’s chambers, presenting him with the Codex, and preventing Zod from killing her, since she’s required to operate the Codex. Zod does end up getting what he wants by retrieving the Codex here, but Nyssa nonetheless escapes with Cor, and manages to get away on a Skimmer with some help from Seg, after a literal leap of faith out of the window!

This is also the point where Seg’s continued carrying of Brainiac’s trace data particularly continues to pay dividends. After using Brainiac’s knowledge to save himself and Nyssa from a deadly Skimmer crash, following a stray laser shot temporarily disabling the Skimmer’s flight integrity, Seg takes some time outside to think, whereupon Brainiac helps him realize that it’s impossible to defeat Zod under the current circumstances. The only way that Seg and his allies could possibly stand a chance is by restoring Brainiac via the quantum computer on Brainiac’s ship, which would give Seg the necessary means to defeat Zod for good, at the cost of fully resurrecting Brainiac to keep menacing other worlds. It’s a very interesting conundrum, and one that Nyssa ultimately gets roped into, after Seg confesses to her that Brainiac lives on within him. The two then decide that they have no other option, and sneak off into the Outlands soon afterward, without telling Jayna and Dev where they’re going. 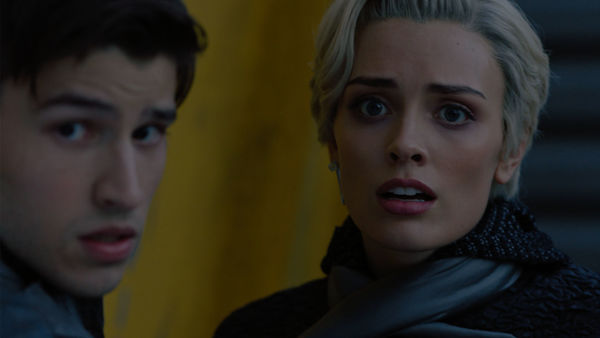 The drama certainly soars on Wegthor as well, after Val is forced to try and bring the fractured resistance together again, despite having to unseat Jax from her position of authority within the rebels. Val manages to get most of the rebels on his side again, but is nonetheless out of options, particularly after Jax manages to get away with a weapon she somehow fashions out of her communicator. Yes, seriously. While it’s fitting that Jax is incredibly resourceful and deadly when she’s cornered, Jax’s escape from her cell feels like it stretches the realms of plausibility, even by the standards of this show. The fact that Jax somehow manages to get away with several Gravity Bombs completely undetected as well, while also sneaking out without anyone noticing, also feels like a pretty huge stretch, even for a former leader of the resistance.

Jax must really be a deadly saboteur as well, since she somehow rigs Wegthor’s entire space elevator with the stolen Gravity Bombs, completely off-screen, before she’s somehow caught anyway by Val, Adam and Kem. Since Zod gives an ultimatum to turn over Jax within the hour, or else he’ll obliterate every rebel, civilian and combatant alike currently on Wegthor, Val is forced to consider turning Jax over to Zod, particularly at Kem’s insistence, since he knows Saggitari conscripts would be caught in the crossfire. Despite this though, Jax’s taunt about Val not being able to make hard decisions ultimately manages to land, since Val ultimately defies Zod, and detonates Jax’s explosives, killing many Saggitari-affiliated innocents, though also crippling Zod’s resources and supply chain for good. It’s an uncharacteristically brutal and uncompromising move for Val’s character, one that clearly weighs on him instantly, while also nicely calling into question whether Val can truly keep Jax away from the resistance, now that he’s been forced to stoop to her level.

Interestingly, it’s the resistance that claims more lives than Zod in this particular episode, despite Zod trying to build a new super-weapon from the freshly-reclaimed Codex. While it initially appears that this is a weapon to use against the resistance as well, the weapon is actually designed to be used against Doomsday, as confirmed by the final seconds of the episode, whereupon Zod single-handedly tracks down Doomsday in the Kryptonian ice caverns, and prepares to test his new weapon on him! This was a great cliffhanger conclusion to another very strong episode of Krypton, one that kept the emotional punches coming very nicely in the wake of Lyta’s death. The emotional pain and sense of loss on both sides was very palpable, and Val especially being backed into a corner wherein he had to cause even more bloodshed in order to cripple Zod was also nicely tragic and difficult to watch. Considering that this is now the back half of Krypton’s second season, Zod’s grip over Krypton appropriately appears to be loosening a bit, but with both Brainiac and Doomsday now poised to make a big return, Krypton’s problems only appear to be multiplying in the near future, once again.