After a rather scattered and underwhelming episode that came before, Black Lightning thankfully tightened its plotting a bit with Season Three’s third episode. “The Book of Occupation: Chapter Three: Agent Odell’s Pipe-Dream” continued to menace Freeland with the extended ASA occupation, now with extra emphasis also being placed on the titular Agent Odell, as he plays all sides of the show’s ensemble to varying effects. This thankfully allows Odell to return to the forefront of the show, as one of Black Lightning’s most enigmatic and appealing characters at this point, though the show’s plotting is still a little scattered here, which keeps Black Lightning’s ‘Book of Occupation’ story pod from achieving its full potential once again.

There’s actually a pretty interesting scenario set up in this episode, namely when a viral outbreak specifically targets captured metahumans that the ASA has under quarantine. After Henderson’s cop buddy is killed by this virus in particular, Odell brings it to the attention of Jefferson and Lynn, in turn confirming that the virus was created by none other than Dr. Jace. The virus is believed to have been distributed to the captured metahumans after Cyclotronic Man was killed in the season premiere as well, which is a very interesting idea, and one that gives Jefferson and Lynn something very cool to do in this episode!… Or so it initially appeared.

Despite the promising premise behind this viral attack, its final execution is incredibly underwhelming. Jefferson is at least given a cool new super-suit by Odell during this storyline though, which handily hides within a seemingly ordinary watch, in a story turn that’s clearly borrowed from The Flash. Even then, despite Jefferson being freed from the ASA holding facility to rough up some Markovians, the commandos he was told to liberate instead announce that he’s fire support, and that Dr. Jace is the actual target. This is fine and good, especially considering Odell’s shadowy agenda, but the end of this mission is not shown, making Dr. Jace’s current whereabouts frustratingly unclear. Moreover, Lynn seems to pretty easily whip up a cure for the virus, but even this is a little vague. Even Jefferson and Lynn returning home to their daughters is hastily shoved aside in fact, and mostly played off as a joke, which, needless to say, is a weird narrative choice. Why is there so little focus on the Pierce family’s supposed successes here?

Even the Pierce sisters felt like they were dragged down by this over-strained narrative focus, with Anissa in particular getting a rather undercooked subplot that once again brings Grace properly back into Black Lightning’s lead ensemble. After spending some time running around with the ASA on her heels, and not really accomplishing much of anything (again, why is there no focus on Anissa’s heroism?), Anissa stumbles upon Grace, who randomly decides to show up in her path. Anissa then forgives Grace once again, and ends her affair with her reporter friend, which the reporter doesn’t seem fussed about anyway. Yet again, Grace is coming off far too whiny about her powers to boot. She feels far less cool and appealing than the other woman, making this narrative shift feel forced. Jennifer at least got some better material after humourously giving a tour to a dashing new student at Garfield High though, whereupon she mentions all of the disasters that struck the school, before blowing up an apparent Markovian data farm at Odell’s request. Once again however, Jennifer isn’t given enough focus to excel in her own story arc, which sees a frustrating lack of real payoffs, again! 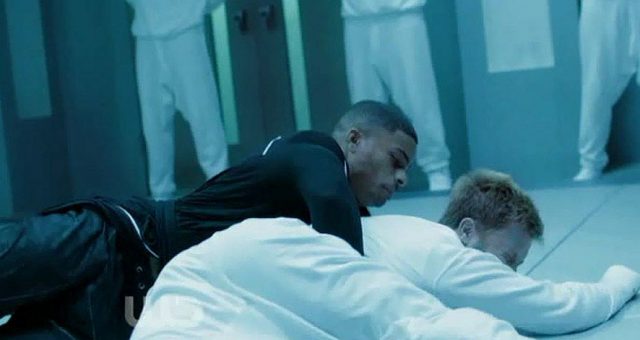 Fortunately, the show’s antagonists at least fared better in this latest episode. Khalil proved to be a scene-stealer as the increasingly lethal weapon of the ASA, mastering ever more new varieties of martial arts and lethal strikes, which he then uses after Jennifer’s data farm destruction reveals another apparent Markovian cell to the ASA. I guess this was supposed to be the payoff to Jennifer’s storyline, but it really could have been separated, since Jennifer herself is used as little more than a plot device in this episode. Regardless, Khalil’s increasing detachment from humanity, which is in direct proportion to his new badass skills, is great to watch, giving Khalil some of his best material in a while! Likewise, Tobias also gets a better storyline in this episode, as Odell tortures him, and tries to bribe him, so that the ASA can get their hands on the briefcase, which now appears to sit with Lala. After an increasingly desperate and deranged Tobias than hallucinates Black Lightning, tormenting him from outside of his cell, the crime lord vows to escape, even after being burned and humiliated, on top of suffering his serum withdrawal, and the ravages of rapid aging, at Odell’s hands. Tobias has never looked rougher, but like a wounded animal, he also feels no less dangerous, despite his vulnerable state.

“The Book of Occupation: Chapter Three: Agent Odell’s Pipe-Dream” is still spreading the Markovian conflict and Freeland occupation a bit too thin in the narrative, especially with the weird lack of payoffs for much of the Pierce family plotting in this case, but at least it presents a better-paced and tighter storytelling result than what the show delivered the previous week. If nothing else, it’s nice to see Jefferson back in action as Black Lightning, and back home with his family to boot. Again though, it’s the villains that are really stealing the show on Black Lightning right now, whether it’s the meeting of the minds by two master manipulators in Odell and Tobias, or Khalil becoming an ever more dangerous ASA weapon, one that Odell is lying to Jennifer about, claiming that Khalil’s mother was instead killed by Markovian attackers. The question of Odell’s honesty and agenda remains thoroughly compelling, despite Odell claiming to be a man of his word, and despite Odell telling what he likely deems to be white lies to people like Jennifer. A Markovian presence has seemingly made its way to Freeland, that we can be sure of, but again, is this international menace really the greatest danger to the city, when the ASA evidently appears to be doing a lot more damage?