The mid-to-late nineties brought with them an explosion of 3D platformers, which were all the rage once the N64 and PlayStation joined the gaming scene. We were treated to quite a few great ones throughout that generation, but there were numerous others that weren’t as well received. Some were good and some were bad, but many were overshadowed by the likes of Super Mario 64, Banjo-Kazooie, Banjo-Tooie, Crash Bandicoot 1-3 and the like.

One such genre affair, which fell under those games’ large shadows but still managed to do quite well despite all of that, was Sony’s MediEvil. Developed by SCE’s Cambridge Studio, the 1998 title ended up being one of the PlayStation’s more notable exclusives once all was said and done, and received a sequel because it did well both critically and commercially. Hell, it even became one of Sony’s budget priced hits.

Fast forward to today and we’re coming to the end of a console generation that has offered a good mix of the old and the new. Coming off the heels of the Xbox 360 and PlayStation 3, the Xbox One and PlayStation 4 have received their fare share of remakes and remasters, some of which were made out of love, while others were made for extra profit and felt rushed (or unnecessary) because of that. In recent years, Activision has been at the forefront of this surge, and has dipped into its history for this purpose. The results have been very well received, remade versions of the Crash Bandicoot and Spyro: The Dragon trilogies, as well as Crash Team Racing: Nitro-Fueled. What do those games have in common? The original PlayStation. 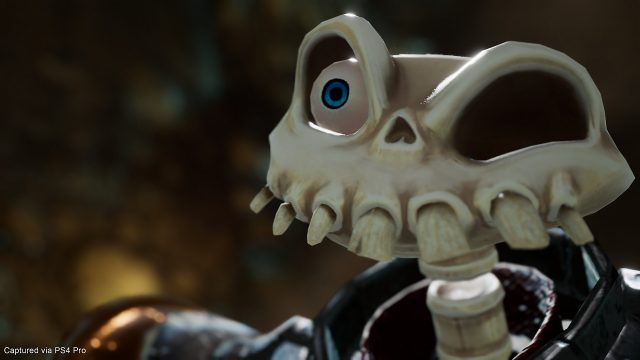 After seeing other companies achieve success by remaking, remastering and re-releasing classic games from decades gone by, Sony decided to get in on the action. Their choice of classic? None other than SCE Cambridge’s MediEvil, which was remade and updated by the folks at Other Ocean Emeryville. It’s now out on PlayStation 4, so we thought we’d give it a try and share our thoughts with you.

If you’re not familiar, MediEvil is the spooky and cartoonish tale of Sir Daniel Fortesque; a knight who died at the hands of an evil sorcerer named Zarok during the year 1286. Well, not his hands per se, but one of his arrows. An arrow that went through Sir Dan’s eye socket. Even worse? It was the first arrow that was fired during said battle, and it managed to fell the good guys’ trusted hero.

A hundred years have passed since that fateful battle, and Zarok is back at it again. He’s decided to cast a spell upon the kingdom of Gallowmere, in order to plunge it into eternal night. This causes corpses to rise, zombies to ‘resurrect’ (so to speak), and has the unfortunate side effect of bringing Sir Dan back to life as a skeleton. Thus, the Hero of Gallowmere is given a second, very unexpected, chance to right his previous wrong and save the realm.

The six to eight hour long campaign that follows is full of quirks and personality, and owes something to Tim Burton’s The Nightmare Before Christmas. Its twenty odd levels utilize traditional action-adventure and platforming mechanics, which will be familiar to anyone who grew up, or simply gamed, during that era. There are lots of colourful characters and enemies, quirky and fantastical environments, and various types of platforms. What’s different about MediEvil, though, is that it’s got a lot of combat to go along with its 3D stages and light platforming. 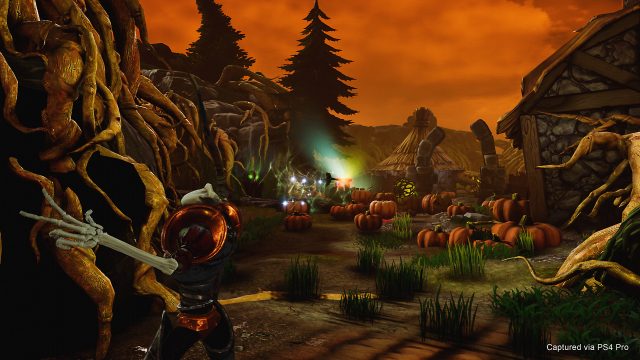 You’ll awaken in Dan’s crypt, will be given a bit of a tutorial, and will then have to fight your way out of (and then back into) a graveyard teeming with zombies. Following that, you’ll work your way towards collecting a key that will open the gates to Gallowmere and its realm of humanity. The game’s various, and somewhat unique, stages include a cornfield and farm full of evil scarecrows, a haunted village where all of the townspeople have been possessed by violent ghosts, a dangerous swamp, an even more dangerous ant colony (which means getting shrunk before entering), and a frightening pumpkin patch. There’s really no shortage of dark, Halloween-inspired material to be found within this game and its campaign. The problem is that none of it is all that fun. At least, not these days, but we’ll talk more about that in a bit.

At first, Sir Dan can only use his arm to fend off foes. However, as the game progresses, he unlocks and becomes privy to several other weapons. There’s the heavy club, which can be set on fire and happens to deteriorate over time; the trusty metal sword, which does decent damage; throwing knives that offer a ranged alternative; a crossbow that is great for going crow hunting; a heavy duty hammer that smashes everything into pulp and chicken grenades that…well, they turn enemies into chicken, which gives you extra health when you pick it up and eat it. One can equip two different weapons at a time, and must cycle between the two by pressing the triangle button. To use them, square is the button you’ll want to press. Meanwhile, X handles jumping, R1 handles shield usage (and sometimes allows you to run fast). The touchpad? It’s how you access your inventory, which is where all of your weapons and collected quest items reside.

When it comes to combat, this thing isn’t shy to throw a lot at you. In fact, it’s a pretty unforgiving game, and is one that will likely frustrate most of the people who play it. It’s very easy to die, especially if you don’t block. The shield is set up to be a very important part of gameplay, but the need for it is hurt by the fact that it, too, breaks over time. You’ll regularly find new copper and silver shields as you play, and may also find something better later on, but they tend to be quite breakable. 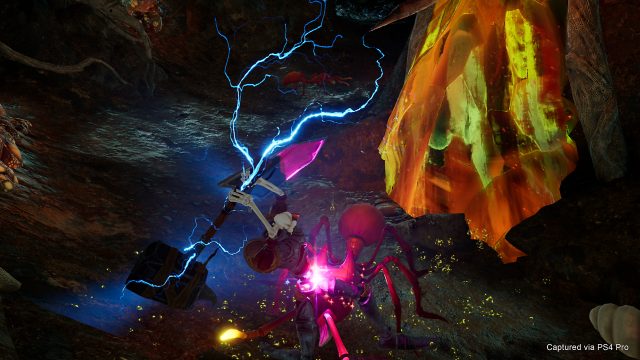 If you’re looking for something that is fun, lighthearted, fair and full of nostalgia for a time since passed, this may not be your best bet. Unlike the Crash and Spyro remakes, MediEvil is rough and somewhat unfair. It’s not all that polished, isn’t very player friendly, and wants to test your mettle more than anything. The problem is that its combat is rough and cumbersome, its blocking mechanics are rudimentary, its controls are finicky and its platforming leaves something to be desired. Judging the distance from one platform to another shouldn’t be as difficult as it is here, but you can expect to fall into water or bog juice from time to time. Doing so will cost you a health potion, too, so be mindful.

In a game as difficult as this one, it’s annoying that the developers chose to make health potions collectible, but that’s what they did. There are close to ten different potion vials to find, but they’re all hidden throughout the game and only one or two come easily. Finding them all will be a great aid to your cause, because enemies pack quite a punch and aren’t afraid to swarm Sir Dan. He can block all he wants, but he has to let his guard down to attack, and when he does he’s likely to get hit. Plus, his shields tend to wear down and go ‘kerblooey.’

Like Dan’s health, the aforementioned vials can be refilled. This is usually accomplished at green energy wells, which wear out after a bit. Standing on one will fill your health bar, and will continue to fill the vials until it empties of its special gas vapors. Of course, there are smaller health pick-ups spread throughout the levels, but not many.

That said, the era in which MediEvil originally released was different from today. During those twenty-one years things have changed, games have become more forgiving, and checkpoints are now expected. Back in 1998, that wasn’t the case. As such, many of this title’s modern day faults can be swept away by saying that it’s a product of its time. While that is true, its rough and unpolished remake is competing with modern day games and will cost you modern day dollars to buy. Is it worth foregoing other options for? Not really. At the end of the day, though, it all depends on what type of experience you’re looking for. The average gamer will likely be better served by buying something else, but MediEvil (2019) is something that will be cherished by people who have nostalgia for its original form, and those who grew up playing it on their PlayStation consoles, or owned the PSP remake. 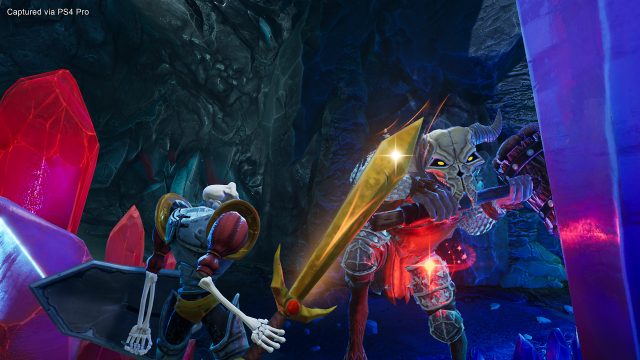 I must admit that this was my first time playing this game. Although I spent many hours with a controller in my hands during the entire decade that was the 90s, most of those were spent with a Super Nintendo or a Nintendo 64. I didn’t get a PlayStation until close to when the PlayStation 2 released, and that was only because I traded my friend 8 used CDs for one. It came with several games, and I did rent some others, but I still missed out on a lot of the PlayStation’s exclusives. This still happened even though one of my other good friends shared a PSX with his family. He generally came over to my house, so we mostly just played N64, though he did bring his PlayStation over from time to time. Those weekends were mostly spent playing Tony Hawk’s Pro Skater 2, Resident Evil 2, Crash Bandicoot, Vigilante 8 or Tomb Raider 2.

When I agreed to tackle this review, I was optimistic that I would enjoy MediEvil. The cover had always caught my eye, and while I’d never actually played the original or its sequel, I’d occasionally thought about it. Hell, it would still pop into my head from time to time during my young adult years. However, now that I’ve had a chance to go hands on with it, I must say that I’m kind of disappointed. It’s not exactly what I was hoping for, or even all that close. 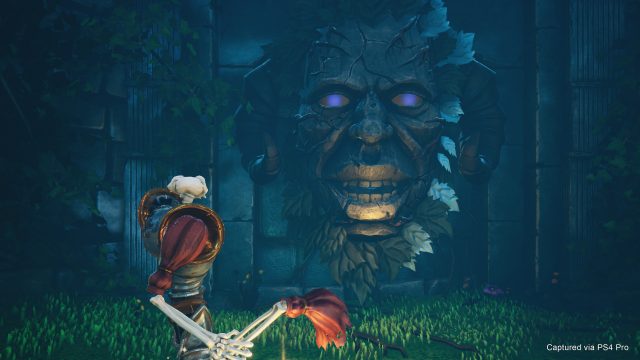 Today’s MediEvil is a product of its time, which has aged poorly despite being newly remade. Other Ocean Emeryville seems to have stayed very true to the source material because, for all of its faults, this is a very dated feeling game. Unlike the Crash Bandicoot remakes, Sir Dan’s tale feels stuck in the nineties and doesn’t seem to have been improved upon much since. The controls are wonky, the gameplay is frustrating and there are no checkpoints to speak of. The camera is also stuck in the 90s, and has the dead zone issues that plagued many games back then. It’s not uncommon to lose sight of where you are, or end up with the camera stuck in an awkward position, because it’s broken.

Most of all, the game just isn’t that fun. There were times where I enjoyed myself, sure. However, as I progressed through the campaign, I became less and less interested in continuing. The frustration continued to increase, but the enjoyment didn’t. Progressing through the campaign also started to highlight more of the game’s faults and the things that could have been improved upon for this release. Not just the rough visuals, but the gameplay itself.

MediEvil isn’t a bad game, but it’s also not a good one. In today’s world, it’s a relic that will frustrate as much as, or more than, it will entertain. As such, it’s only for a select crowd, with that being those who hold nostalgia for it.

This review is based on the PS4 exclusive, which we were provided with by Sony’s PR firm. We reviewed it using a PS4 Pro.