The live-action DC Multiverse is dead and gone, as of the fourth part of The CW’s landmark Crisis on Infinite Earths crossover event. This was a hell of a cliffhanger to leave The CW’s combined DC programming on before the network settled into its extended Winter break, after beginning a crossover so large in scope that it had to be spread across two separate months! Finally though, Crisis on Infinite Earths returns for its two-part conclusion this week, with Arrow supplying the fourth part of the crossover, its final crossover episode in general, before the series ends in a couple of weeks, and before Legends of Tomorrow follows that up with the crossover’s fifth and final episode on the same night. Arrow’s final crossover offering also doubles as a key moment in that show’s lore in particular, since Arrow protagonist, Oliver Queen has now successfully inherited the mantle of the Spectre, giving him the necessary power to help stop the Anti-Monitor for good, alongside the seven surviving ‘Paragons’ of the destroyed Multiverse.

The battle against the Anti-Monitor properly gets underway in this episode, though not before the Arrowverse’s seven surviving Paragons spend months trapped in the Vanishing Point (how are they surviving without food and water?), with no idea of how to escape, or keep the battle going. It seems like the Arrowverse’s handful of surviving heroes, and one surviving villain (and the newly-introduced Ryan Choi), have truly lost, and are truly out of options at this point. To compound that issue, Barry has seemingly gone missing, trying in vain to penetrate the Speed Force, only to discover that there truly is no way out of the Vanishing Point. Considering that nothing is left of the Multiverse at this point anyway, there isn’t really anywhere for the heroes to go. For all intents and purposes, the Anti-Monitor has won. 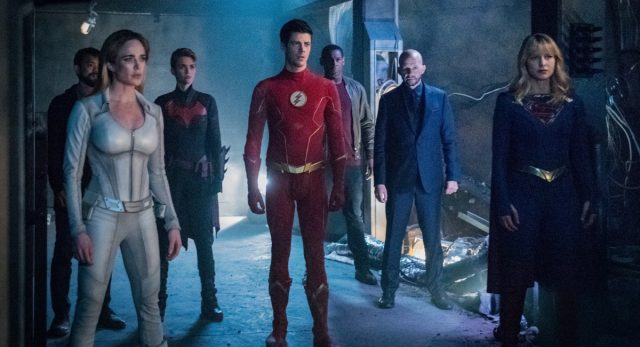 This is where Oliver’s new transformation comes in though. It turns out that Oliver, now being the host for the otherworldly Spectre, has the ability to transport the heroes through the Speed Force successfully, with some help from Barry. This gives the heroes a fighting chance, namely by allowing them to travel back in time to try and prevent the Anti-Monitor from ever coming into the Multiverse in the first place, by appealing to the Monitor’s hubris in the distant past. This leads to a superb duo of storylines that get Crisis on Infinite Earths back to top form, after the crossover’s third episode, previously hosted by The Flash in December, ended up being a bit disappointing. These two storylines see Barry, Sara, J’onn and Kate dumped into the Speed Force, while Kara, Ryan and Lex are successfully transported to the Monitor’s home planet, Maltus, ten thousand years in the past, wherein they learn the origin of the Monitor and the Anti-Monitor, and must try to talk a pre-Monitor Mar Novu out of conducting the deadly dimension-hopping experiment that inadvertently leads to the Anti-Monitor’s creation.

It turns out that the Monitor, back when he was merely the mortal Mar Novu on an unnamed parallel Earth, attempted to travel to the Dawn of Time, with the aid of his wife, a brilliant scientist on their world, and the original ‘Monitor’. Despite the experiment seemingly being a success however, Novu ends up accidentally opening a gateway to the Anti-Matter Universe, unleashing an all-powerful and twisted doppelganger of himself, known as the Anti-Monitor, who aspires to replace the recognizable Multiverse with a new anti-matter-fueled Multiverse. The idea of the Monitor’s hubris giving him both absolute power, and leading absolute destruction to the Multiverse, is pretty interesting, and creates nicely tragic stakes for Novu, much as they did for the now-dead Nash Wells/Pariah. It gives humanity to a character that was formerly labelled as simply being a, “Space God”, while nicely completing the true dramatic depths of the battle that must be fought against the Anti-Monitor. 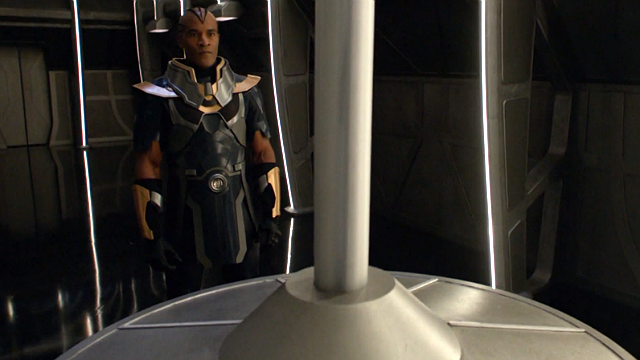 Kara and Lex ending up in an ideological and physical duel on Maltus, on account of trying to win Novu’s trust in their own separate ways, also makes for a pretty great story hook. It’s all the better when we see that Lex has not only re-written the Book of Destiny to make himself a Paragon in Earth-96 Superman’s place, but also given himself superpowers, allowing Lex to fight with energy blasts and enhanced strength. This results in Kara and Lex eventually having to duke it out, after Lex inevitably goes off the reservation on Maltus, while Ryan has to try and appeal to Novu to not conduct the experiment. Everything was mostly great here, though Ryan unfortunately ends up being a weak link in this storyline. Ryan may talk this particular rendition of Novu out of the experiment, but this ends up being pointless, since the Anti-Monitor ends up being unleashed from elsewhere in the Multiverse of the past anyway. Moreover, Ryan somehow holds his own against Shadow Demons with no powers, no fighting ability, and no reason to be a Paragon. Seriously, why the hell is he even here?! It might have actually made more sense for Lex to overwrite Ryan as a Paragon, not Earth-96 Superman, especially since Lex sees himself as a huge humanitarian to begin with. I know that Lex hates Superman, but surely, Lex must realize that having a Superman fighting for the Multiverse is a lot more useful than some greenhorn science nerd who doesn’t know a damn thing about being a superhero!

Fortunately, the narrative material in the Speed Force is also pretty great here, and it doesn’t have the inexplicable presence of Ryan dragging it down to boot. After Barry realizes that half of the Paragons have become stranded in the Speed Force, Oliver insists that Barry find them and restore their memories, so that they can fight the Anti-Monitor at the Dawn of Time. This results in a nice showcase of past victories and losses in the Arrowverse, many of which inevitably tie back to key moments in Oliver’s backstory. J’onn, Kate and Sara all end up being inserted into key moments with Team Arrow, learning a new perspective on being heroes, as the Arrowverse’s other protagonists interfere with events from Arrow’s history, including a tense introduction between Oliver and Ray Palmer, the initial death of Sara, and Oliver’s initially suspicious first impression of Kara. 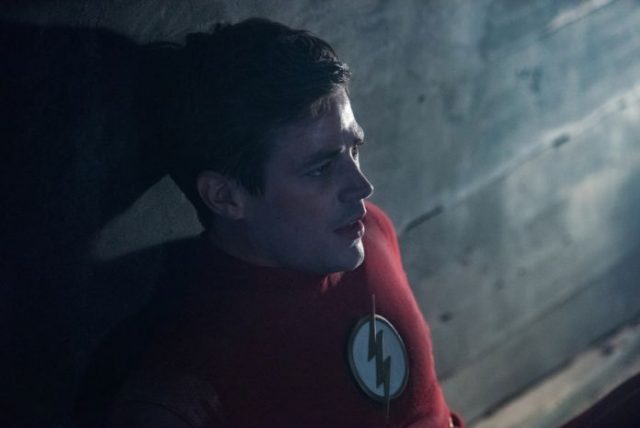 This is a cool storyline for Barry to headline alongside the heroes exempted from Maltus, but even cooler is the fact that Barry ends up accidentally bumping into another Flash during his time in the Speed Force, specifically Ezra Miller’s Flash from Warner Bros.’ DC Extended Universe movie franchise! This is right up there with the equally unexpected Lucifer cameo as one of the coolest surprises in this crossover, even as this scene is mostly played for laughs, with the TV Flash and movie Flash both getting confused by each other’s presence, reacting to each other’s costumes, and having a brief conversation about their separate identities. The implication that the DCEU is one of the many parallel Earth’s in DC’s live-action Arrowverse continuity is very cool (despite Miller’s Flash seemingly not being aware of the Multiverse’s destruction), and the tease that Miller’s Flash learns his superhero name from Gustin’s Flash (recall that Miller’s Barry Allen has never been referred to as, “The Flash” in the DCEU up to this point), is even better, potentially creating a small, but clever nod to the events of this televised Arrowverse crossover in 2022’s upcoming Flash movie that’s set in the DCEU.

In any case, after Barry’s brief conversation with his DCEU counterpart, and successful reunion with his friends, the Paragons re-assemble at the Dawn of Time, with Oliver standing alongside them as the Spectre, only to see that another Mar Novu doppelganger inevitably unleashed the Anti-Monitor just the same, making the heroes’ initial efforts to stop the Anti-Monitor’s rise completely pointless. Still, we do get a fairly decent battle sequence to serve as a climax in this episode, as the Paragons take on another army of Shadow Demons at the Dawn of Time, while Oliver uses his new Spectre powers against the Anti-Monitor himself. Oliver even seemingly destroys the Anti-Monitor successfully to boot, expending all of his power to both vanquish the ultimate foe of the DC live-action Multiverse, while in turn enlisting the Paragons to help rebuild a new universe, using what remains of the Book of Destiny. Despite the battle seemingly being won however, Oliver expending all of the Spectre’s power to rebirth the universe and drive off the Anti-Monitor once again leaves him mortally wounded, with the heroes gathering around him as Oliver tells them to keep on living in the new world, and that dying is the easy part, leaving him at peace. Thus, this poignant battle ends with Oliver dying once again, this time for good, leaving a bittersweet tone for the lingering Arrowverse, as the creation of a new world ends up being contrasted with the permanent loss of Oliver, who can’t even be saved by the power of the Spectre anymore.

Killing off the lead protagonist of Arrow while two more episodes remain in the show’s run is certainly a gutsy move, especially when it initially seemed like Oliver would live on in the Arrowverse post-Arrow as the new host of the Spectre, but regardless, the creation of the new Earth, along with the heroes struggling against the inevitable, and eventually prevailing, creates a nice air of hope that feels rewarding and emotionally uplifting. Again, Ryan Choi never truly feels like he belongs with the Paragons in the end, since his successful effort to stop Mar Novu from undertaking his experiment never actually amounts to anything, especially when Ryan’s impossible survival in the battle against the Anti-Monitor’s forces just ends up completely deflating the Shadow Demons as a threat, but even then, “Crisis on Infinite Earths: Part Four” is a considerable improvement over the crossover’s previous episode from last month. It’s curious that the crossover still has one episode remaining, even as a new world is birthed, and the Anti-Monitor is seemingly defeated, but if there’s one thing that Crisis on Infinite Earths has delivered in spades, it’s cool surprises. Thus, I imagine that there’s one more batch of cool surprises left to come in the following Legends of Tomorrow episode, hopefully rounding off what’s arguably The CW’s most memorable and ambitious crossover effort on a fittingly fantastic note.