Black Lightning is starting to lay the groundwork for finally wrapping up the ASA’s occupation of Freeland, alongside its third season, and this finally has the separate agendas of the various lead heroes starting to fully come together. “The Book of Markovia: Chapter Three: Motherless Id” still has to cover a lot of narrative ground though, sometimes to a fault, and because next week’s episode is seemingly bringing the ‘Book of Markovia’ story pod to a climax, this week’s episode is left to feel like it’s being saddled entirely with setup for next week. A few good story moments do sneak in here, but Black Lightning is still unfortunately back to being a little dull this week.

The storytelling in this episode also feels very rushed at times, as if Black Lightning’s current narrative realized it didn’t have enough episodes to properly flesh out the rest of its ideas for Season Three. This is evident right out of the gate as well, after Sergeant Grayle summons Jefferson and Anissa to Lynn’s apartment, in order to indicate to them that Lynn has been kidnapped by the Markovians. Wait, so that Markovian agent just let Grayle go? Why? I know that Grayle is a key figure that’s taken from DC Comics lore, but Markovia has no reason at all to keep him alive. The only reason that Grayle inexplicably survived Markovia’s agent getting the drop on him is so he could inform Jefferson and Anissa that their ex-wife and mother, respectively was taken. 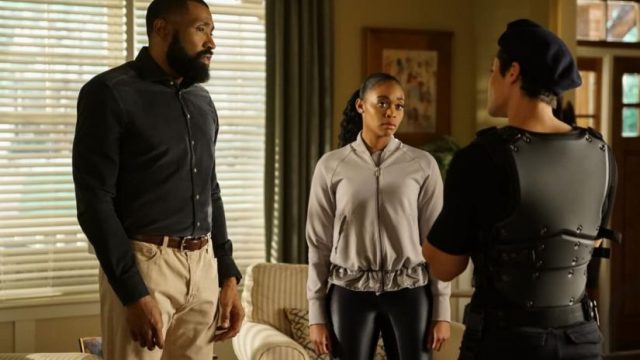 On the bright side however, the idea of Jefferson, along with several of his allies, having to work in an uneasy alliance with the ASA, in order to rescue Lynn from Markovian capital, Markovburg, presents some good story promise. As much as the show has struggled to nail down another worthy ASA threat outside of Odell, who now seems to have washed his hands of affairs in Freeland at this point, the idea of the ASA forcing Jefferson and Anissa in particular into an ASA alliance, only to conspire to kill Lynn if they can’t successfully recover her, is really interesting. Obviously, Jefferson and Anissa can’t trust the ASA, but as Anissa points out, they’re going to have to do so, since Freeland’s resident heroes aren’t equipped enough to take on all of Markovia on their own.

The material with Lynn that actually took place in Markovia was similarly good, and often marked the best story turns of the episode. After Lynn is dumped with Dr. Jace, so they can both make a metahuman stabilization agent for Markovia, Markovia’s agent-in-command leaves Lynn with a Green Light pill, after revealing that the ASA intentionally addicted her. This puts Lynn in a corner in a very smart way, not only forcing her to ally with Dr. Jace, but also to work under Markovia’s terms, with Nurse Allen also being revealed as Markovia’s spy in the ASA, go figure. Despite Lynn’s efforts to resist her Green Light withdrawal, she’s ultimately forced to take the drug too, with Dr. Jace assuring Lynn that she will die if she doesn’t. This supposed compassion from Dr. Jace is also a ploy however, with Dr. Jace working out her own deal with the Markovians, which apparently involves lobotomizing an equally captive Tobias, so they can freely extract the stabilization agent from him. Well, that’s certainly not great news for Tobias, even though I doubt that the Pierce family will shed many tears for him, should Markovia’s plot for Tobias’ body be successful. 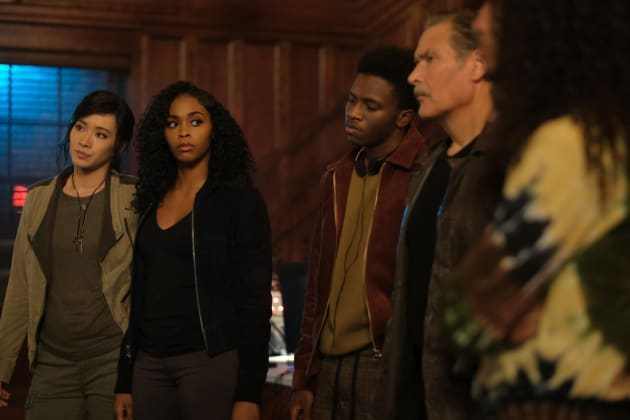 Another key storyline in this episode involves TC revealing that Khalil is indeed still alive in the mind of the reborn Painkiller as well. This isolates Jennifer from the rest of the storytelling, as she, TC and Gambi all try to figure out a way to extract Khalil and restore his conscious mind, while neutralizing the Painkiller program by locking it behind a firewall. This is a promising idea, but it definitely needed its own episode to fully gel, since the Khalil restoration subplot feels undeniably rushed here. Jennifer somehow using her powers to lock the Painkiller program behind a firewall feels like a stretch, and likewise, Khalil facing everything that Painkiller used his body to do never really lands with the proper dramatic impact, since Khalil simply bumbles around or stays put as the script demands. Khalil walking out on Jennifer in the final seconds of the episode is a little more effective, but even this needed more storytelling focus to fully land.

Finally, the rest of this episode involves several characters preparing to come together in a party of misfits, after Jefferson and Major Grey make a deal to try and infiltrate Markovia together. This involves a series of mostly disposable mini-plots, first with Anissa and Grace, as Anissa tries, and inevitably fails to stop Grace from going to Markovia with her, as well as Jennifer and Brandon, with Brandon occasionally interjecting in the Khalil subplot to assert his own desire to go to Markovia. The ASA also prepares Erica, one of their captive metahumans, to accompany Jefferson’s party too, with Jefferson successfully negotiating that any allies coming on the mission to Markovia will get full pardons from the ASA, as well as all their records erased from the organization, including Gambi’s. This is certainly a worthwhile reward if the heroes can successfully rescue Lynn, but something tells me it obviously won’t be that simple, especially after Major Grey secretly has Erica programmed with an order to kill Lynn, should Jefferson’s party fail to retrieve her in Markovia.

Thus, there’s plenty of reasons to look forward to next week’s Black Lightning episode, now that the heroes are officially taking the fight to Markovia’s own soil. That said, this story direction also meant slogging through an episode that largely exists to bridge two likely better episodes together this week. “The Book of Markovia: Chapter Three: Motherless Id” at least restored Khalil to his old self, while it was arranging the rescue mission for Lynn, but it did so at the cost of several rushed, undercooked story elements. Khalil’s restoration in particular felt awkwardly sandwiched into too many other storylines, and the result of Khalil walking away from Jennifer begs the question of whether he’ll even show up again for the rest of the season. Still, the material in Markovia was generally better, and I’m sure that the inevitable treachery of Major Grey will eventually pay off too. With Freeland’s resistance remaining in the background throughout this episode as well, it seems like even Black Lightning itself has started to grow bored with the city’s ASA occupation, so hopefully a trip to Markovia can treat us to some fresher material next week, along with a better sense of the show’s story moving forward.