Oh wow. This is a big one, folks. “The Timeless Children” blows the roof off of the entirety of Doctor Who, making good on The Master’s promise of everything The Doctor knows as being a lie, and thensome. This highly ambitious finale for Series Twelve aims to have viewers re-thinking their knowledge of Gallifrey, the Time Lords, and the entire life of The Doctor up to this point, and in that respect, it pays off in spades! Granted, this season’s final struggle against Ashad and the Cybermen is a little more uneven, by contrast, especially when Captain Jack fails to show up, as promised. Then again, perhaps Jack is saving his big move for this year’s upcoming special episode, especially considering one final surprise turn that leaves The Doctor in a new precarious position.

Picking up where last week’s episode left off, “The Timeless Children” has The Doctor led into the heart of the ruined Gallifrey by The Master, whereupon The Master finally tells his longtime enemy the truth about the Time Lord race. In a series of bombshell revelations, it’s revealed that the entire Time Lord backstory is apparently a lie, as detailed by Gallifrey’s Matrix, which The Master preserved, despite laying waste to the rest of the planet. The Matrix compiles the life history and knowledge of every Time Lord in existence, including The Doctor and The Master, and there’s a lot more to The Doctor than meets the eye as well! As one can easily predict, The Doctor isn’t just any old Time Lord. She is, in fact, the Timeless Child herself! Yeah, it’s not the most shocking development, but the shocks were yet to come. 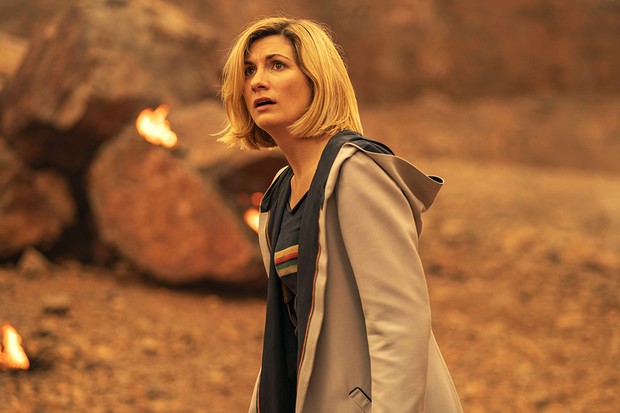 Compounding the bold revision of Doctor Who’s overall Gallifreyan lore, including that of The Doctor herself, is the early twist that The Doctor is actually from another dimension, an unknown universe completely independent from the recognizable world of the series. This explains why Doctor Who has suddenly abandoned its rule of not incorporating parallel universes into its storytelling during the Chris Chibnall era of the show. Not only that, but The Doctor, as a child, was found by Gallifrey’s inventor of space travel, the explorer, Tekteun, who adopted the mysterious child after finding her near an inter-dimensional portal on another planet. After a childhood accident results in the child then falling off of a cliff and perishing, Tekteun is astonished to see the child’s body regenerate into a new form, completely healed.

This leaves Tekteun desperate to reverse-engineer the power of regeneration, something that she eventually succeeds at doing, in turn regenerating herself into a black male body. Now completely changed, Tekteun then decides to elevate the best and brightest of Gallifrey into an overseeing society that observes the universe, with the initial rule that they can’t intervene in other worlds or history. Yes, Gallifrey apparently just discovered time travel through some unknown means at another point in their backstory, just because. It’s disappointing that this is the best explanation that Doctor Who can offer regarding how this universe discovered time travel, but oh well. Powered by their newly-synthesized regeneration abilities, these elite Gallifreyans would eventually become the first Time Lords. Despite their former rules however, a new covert ‘Division’ was eventually formed within the Time Lords, who had the ability to meddle in history and other worlds, off the record. Because of course this happened.

The rest of Gallifrey’s true history is lost from here, and even then, there’s a huge chunk of Doctor backstory that these revelations don’t account for. This isn’t a bad thing though, since it means that we can look forward to The Doctor discovering yet more means of uncovering her own history, and the actual history of the Time Lords, at some point during this show’s future. As it turns out to boot, The Doctor had her mind wiped at some point in the past too, shortly before her regeneration into the First Doctor, the one that William Hartnell debuted during Doctor Who’s initial premiere in 1963. This means that The Doctor has an unknown number of other regenerations and lives that are absent from her memory, including the unknown regeneration that The Doctor briefly interacted with during, “Fugitive of the Judoon” a few weeks ago. Fortunately, this massive scope to The Doctor’s unknown past does allow her to overload the Matrix and escape The Master’s trap however, and not a moment too soon, since The Doctor’s companions are still trying to escape the Cybermen!

Said escape is at least filled with plenty of intense thrills, especially from Ryan’s end, since he’s not stuck hiding on a spaceship with Yas and Graham. Yas and Graham actually end up disguising themselves as Cybermen in order to get away from the gaze of Ashad, which is kind of an interesting idea, especially when this turn also allows them to save one of Ryan’s allies further into the episode. It’s a little questionable as to how the other resistance members can rig up Cybermen disguises that quickly and easily, but I suppose we do have to keep the episode moving. The companions even manage to make it through the boundary and into Gallifrey eventually, with The Master learning of Ashad carrying a world-ending ‘Death Particle’ meanwhile, shortly before miniaturizing Ashad. Yeah, Ashad’s defeat is very quick and thankless here. In fact, Ashad wasn’t that useful throughout this episode in general. Considering that he’s been an arch-villain for the past three episodes now, this was a bit of a lame way for Ashad to go down, especially when he stupidly tells The Master that the Cyberium will leave his body if he dies, with The Master obviously killing Ashad immediately as a result. Seriously, what did Ashad think was going to happen after he blabbed that detail?!

Regardless, The Doctor eventually figures out that she can rig up the Death Particle to destroy Gallifrey permanently, right after The Master steals the Cyberium. Naturally, that’s for nothing good, and sure enough, this allows The Master to create a new race of Cybermen, empowered by the Time Lords’ own regeneration capabilities! This has The Doctor facing the fact that she can’t allow The Master, nor his creations, to escape Gallifrey, and she’s even prepared to sacrifice herself to kill The Master and his Cybermen as well, and make sure their scourge doesn’t spread! Obviously though, this doesn’t pan out quite that simply. Truthfully, this episode does get a little rushed and clumsy towards this end point, since The Doctor obviously can’t kill herself, or else we wouldn’t have a show. Thus, Ko Sharmus takes The Doctor’s place, as the resistance member that apparently failed to secure the Cyberium from Ashad, and as The Doctor rushes to a different TARDIS, while the companions are sent back to the 21st Century alongside the resistance’s other survivors, Ko Sharmus detonates the Death Particle, completely obliterating Gallifrey. The Master presumably also dies during this event, but more than likely, he’ll be back eventually. As much as it seems like there’s no way out for The Doctor’s Time Lord arch-nemesis here, Sacha Dhawan’s entertaining new incarnation of The Master alone is far too enjoyable to just kill off.

Despite making her way back to her own TARDIS, after disguising the other one as a tree however, The Doctor is nonetheless apprehended by the Judoon immediately afterward, who finally make good on their promise to catch their fugitive. With The Doctor now being imprisoned on a mysterious asteroid, the episode and the season then ends, with The Doctor once again separated from her companions, who, at this point, believe that The Doctor sacrificed her life on Gallifrey. I’m sure that Doctor Who fans’ heads will be spinning after such massive narrative bombs dropped on them throughout this season finale, and indeed, when, “The Timeless Children” focuses on its huge lore revisions, it’s absolutely at its best. That’s why it’s a bummer that the rushed, unsatisfying defeat of The Master and his Cybermen somewhat drags down this episode, with even Ashad going down like a chump in the end, due to his own stupidity. Nonetheless, Doctor Who will never be the same after this, and whether or not this season’s sweeping changes to the backstory of Gallifrey and The Doctor end up benefiting the storytelling is for the future to decide. For now though, the show is going back off the air for an unknown amount of time, left only with the promise that, whenever the upcoming special episode is set to air, it will at least give us another good old-fashioned romp against the Daleks. Maybe not everything has to change, eh?

Doctor Who 12.10: "The Timeless Children" Review
Doctor Who blows up the foundation of its entire lore in this week's highly ambitious season finale, even if the decisive battle against The Master and the Cybermen leaves a bit to be desired.
THE GOOD STUFF
THE NOT-SO-GOOD STUFF
2020-03-02
85%Overall Score
Reader Rating: (1 Vote)
99%