Oh, boy. This is awkward. The Walking Dead spent this week’s entire episode setting up for Season Ten’s subsequent finale, mostly taking its time, dragging its feet, and not really advancing the story to any meaningful degree. This would already be a little frustrating under normal circumstances, but worse still is that the ongoing COVID-19 pandemic in the real world has prevented post-production work from being completed on time for the final episode of this season. Thus, we have no idea when the Season Ten finale for The Walking Dead will actually air at this point, with AMC only promising that it will be some time later this year. As such, the season’s final episode has effectively been indefinitely postponed, alongside the planned series debut for The Walking Dead: World Beyond that was also supposed to air next week, and that creates a very frustrating note to prematurely end The Walking Dead on, for now.

Sure, this ultimately amounts to bad luck more than any kind of real incompetence by AMC or the showrunners, but even so, “The Tower” is a disappointingly boring episode that teases a hopefully better season finale for The Walking Dead, whenever that finally airs. This entire episode is spent going in circles, establishing a season finale scenario that could have taken a lot less than an hour to be properly laid out. Fortunately, a few better story elements do sneak in here though, as various citizens of the survivor communities hole up in an abandoned hospital, trying to put together one final plan to destroy the Whisperers once and for all. Meanwhile, Eugene, Ezekiel and Yumiko have just met a colourful, energetic new survivor, one that’s overjoyed to see them. As I predicted (and it will be obvious to anyone who has read the Walking Dead comics), this survivor is Princess, and for at least a year, she’s been living alone in this large city environment. 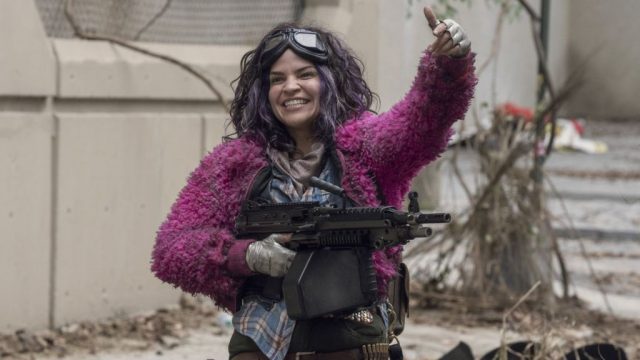 Paola Lazaro’s Princess is a huge breath of fresh air in what’s otherwise a very dull episode for The Walking Dead, thankfully. Princess is bubbly and full of personality, but she’s also socially awkward, having not seen people in years, and predictably being very excited to lead Eugene’s party through the city, that is, after accidentally scaring off their horses. The character arrangement in this storyline is actually brilliant, between Eugene being the one obsessing over the ticking clock on Stephanie, Ezekiel being the optimist that wants to see the best in Princess, and Yumiko being the cynic that’s determined not to trust Princess. This all comes together in a genuinely fun and effective city exploration plot, one that nicely allows The Walking Dead to actually breathe for once, and operate on an emotional gear other than being lethargic and depressing.

So far, Princess doesn’t appear to have any connection to the Commonwealth in the Walking Dead TV canon, a major new faction that I imagine will probably be teased in earnest once the group meets Stephanie, something that doesn’t happen in this episode. Instead, Princess happily chats up the group while leading them around the city, and her interactions with the survivors are generally episode highlights. There are still some sour notes here and there, most notably a minefield obstacle that this episode criminally under-utilizes, but for the most part, even Princess’ inevitable betrayal of expectation is done in a smart way. She ultimately leads Eugene’s party in circles, but only because she was lonely, and didn’t want to stop hanging out with her new friends. It’s a surprisingly sweet motivation after a long season of fighting some especially inhuman villains especially, and seeing Eugene publicly relate his own social struggles to Princess, before Yumiko is the one to extend her an invitation to join their community, is a perfectly satisfying payoff that we unfortunately won’t get to see developed any further yet, due to the unscheduled delay of the season finale. 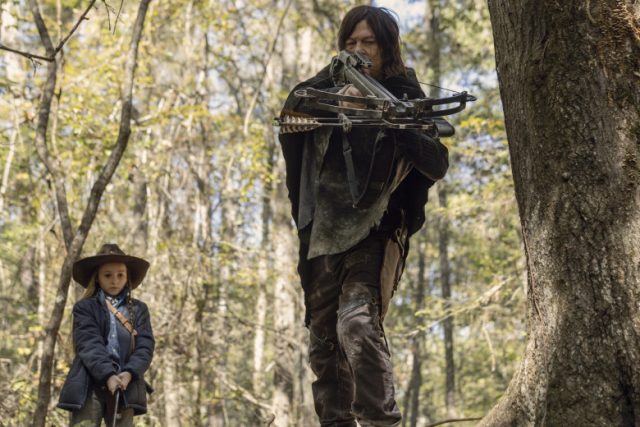 The rest of this episode however mostly feels packed with disposable filler that just doesn’t matter. Daryl and Judith are completely wasted in a storyline involving trying to track Beta’s herd, only for Judith to bellyache about Daryl putting down a displaced Whisperer that had decided to abandon Beta. It’s pointless and goes nowhere, merely culminating in a schmaltzy speech to Judith about the community that rings completely hollow. Likewise, Beta appears to be becoming more mentally unsound, after finding Alexandria empty, while Aaron and Alden secretly calculate Beta’s numbers from the nearby tower. The Whisperers do eventually get the drop on Aaron and Alden, but Beta spends almost this entire episode wandering aimlessly and talking to himself. It’s not exactly an imposing or effective start for the new Whisperer leader, who does indeed appear to be too dependent on Alpha to make a real impression as a villain in his own right, at least for now.

One character-driven subplot that did work well, meanwhile, was Lydia having to face Negan at the hospital that the communities are holed up in, after Negan murdered her mother. Negan tries his best to smooth things over with Lydia and understand her grief, only for Lydia to eventually break down, and share in a genuinely great moment of anguish with Negan over Alpha’s demise. Like the introduction to Princess, this injected some standout character material into an otherwise boring and empty filler episode. “The Tower” would have felt like a frustrating waste of a setup to begin with, but it feels even worse now, with viewers having no idea when to expect The Walking Dead’s tenth season finale to actually make it to the airwaves. This is a frustratingly weak note for The Walking Dead to prematurely end on, even if it’s only one episode shy of completing the season at this point. Now, the pressure’s truly on for the upcoming season finale to deliver on this episode’s protracted setup, as the Whisperer War finally appears to come to a climax that will hopefully be worth the indefinite delay.

The Walking Dead 10.15: "The Tower" Review
The Walking Dead prematurely suspends its tenth season on a frustratingly dull filler episode this week, though the debut of Princess at least makes a good impression.
THE GOOD STUFF
THE NOT-SO-GOOD STUFF
2020-04-06
66%Overall Score
Reader Rating: (0 Votes)
0%