Now that we’ve fully established the new status quo for Harley Quinn’s animated rendition of Gotham City, it’s time to start taking the fight to the handful of lingering Batman villains that have since taken over the city’s remaining territory. “Riddle U” quite aptly positions Harley and her crew against the Riddler, who has apparently taken over Gotham’s local university, and transformed it into an establishment centered around promoting the power of puzzles. More importantly however, Riddler has his own private power supply, and before Harley and co. can do anything else, they’ll need to get hold of it for themselves.

This effectively splits Harley’s crew between two storylines, with Doctor Psycho and King Shark being shuffled over to a straightforward subplot, wherein they seek out a water purifier for the abandoned mall. Harley and Ivy are then left to pose as students at Riddle U, alongside Clayface, whose initially feeble disguise as a young girl named Stephanie ends up opening every single door for Harley and Ivy, who actually stick out like a sore thumb. I have to admit, the running joke of Clayface suddenly being the most useful member of Harley’s crew remains pretty hilarious, and in this case especially, Clayface completely steals this episode. His ‘Stephanie’ disguise gets most of the episode’s biggest laughs, on top of doubling as the most efficient way to advance the narrative, namely since ‘Stephanie’ inevitably gets sucked way too deeply into life as a popular young university student. 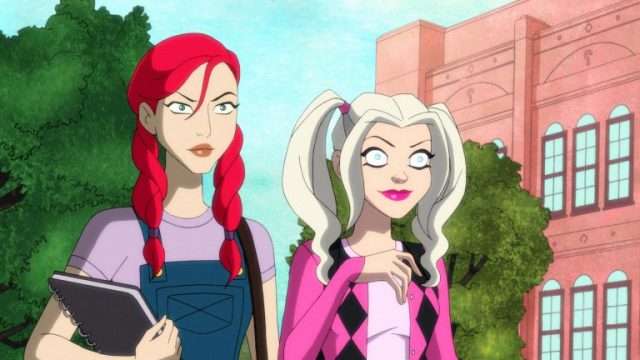 It’s good that Clayface covers so much comedic ground too, because the rest of the storytelling at Riddle U feels strangely restrained, despite a pretty amusing and inventive payoff. The jokes surrounding Harley and Ivy just aren’t that funny or novel this week, with Clayface instead doing all of the comedic heavy lifting. This could be because Riddle U is also being used to introduce yet another crucial Batman Family personality to the show, namely Barbara Gordon, who serves as Harley’s and Ivy’s initial tour guide around the university. I do have to say as well that a newly-separated and disgraced Commissioner Gordon living in Barbara’s dorm room is pretty funny at least, especially since this sets up a golden opportunity to mock how oblivious Gordon ultimately becomes when Barbara eventually dons her DC Comics superhero mantle of Batgirl.

Barbara even finds her way to this vigilante identity within this very episode, starting with a cute foreshadowing that occurs when Harley initially fails to catch a fleeing Barbara, after mistaking her for an agent of Riddler. Once Harley and Ivy discover the absurd truth behind Riddler’s operation however, namely that Riddler is using the cover of a party’s VIP lounge to capture students and force them to run on power-generating hamster wheels (this deserved to be so much funnier than it ultimately was), Barbara dons a mask and saves them, complete with helping apprehend Riddler. Yes, Riddler manages to survive, unlike Penguin, though with the consequence that he now has to run on a hamster wheel for Harley and Ivy, in order to power their lair. It’s a humourous and fitting punishment for Riddler, and one that leads nicely into Barbara making her own Batman-inspired costume, already beginning the first chapter of her transformation into Batgirl within this animated universe, while her father just obliviously snores on a chair. 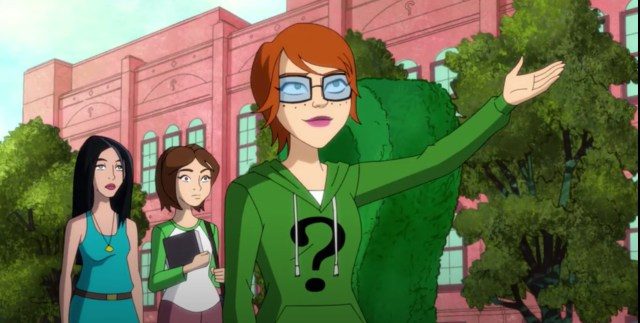 As for the Doctor Psycho/King Shark subplot, it’s another pretty straightforward sidestory, but it does admittedly have a great payoff. When the two villains end up running afoul of Two-Face’s goons, who control the GCPD precinct (as revealed during the previous season premiere), they have to race away in an impromptu ‘death car’, with the water purifier that they’ve successfully pilfered. This is another instance where the jokes really deserved to be better, even if this was another spot where this episode at least enjoyed some welcome action scenes, much like the Riddler confrontation in the core storyline. The ultimate payoff also comes when the two accidentally drive their ‘death car’ into Bane’s territory, only to be cornered by Bane’s henchmen… And forcibly initiated into Bane’s gang off-screen. It was a big let-down to not actually see this initiation take place (even if leaving it to the imagination isn’t completely ineffective), but the ultimate payoff of Harley revealing that the new power supply automatically purifies the water, thereby making Psycho’s and King’s efforts completely pointless, is at least a hilarious final result to this disappointingly disposable subplot.

“Riddle U” doesn’t have nearly the same degree of strong momentum that last week’s season premiere had, but it does at least manage to deliver a decent introduction to the Harley Quinn universe’s Barbara Gordon. The humour definitely stalled a bit more this week (Sy is even strangely absent for this episode), but Clayface fortunately managed to single-handedly inject some great laughs into the core storyline, even considering the rather disappointing climactic confrontation with Riddler. The Doctor Psycho/King Shark subplot also didn’t have too many standout jokes, even if the amusing way that it ended at least made the journey worth it. Harley Quinn just wasn’t on its A-game this week, but that’s bound to happen sometimes. There’s always next week to bring the show back to its usual comedic standard, especially now that Batgirl can hopefully provide a strong, heroic foil to Harley’s crew of mischief makers.

Harley Quinn 2.2: "Riddle U" Review
Harley Quinn loses too much of its comedic momentum this week, but Clayface's antics make up for the weaker jokes, as does a fairly inventive new origin story for Batgirl.
THE GOOD STUFF
THE NOT-SO-GOOD STUFF
2020-04-12
77%Overall Score
Reader Rating: (0 Votes)
0%