Every once in a while, an unexpected little game drops that is full of charm and style that few before it have. Good Job! was one such shadow drop, a game that Nintendo announced in its Nintendo Direct Mini on March 26th and released that same day.

The title has a simple premise: you’re hired to work at your dad’s company in a towering office building, and you work your way through the ranks accomplishing various tasks along the way. It sounds like actual work, but the tasks range from watering flowers to crane operations, each of which can be done carefully and with grace, or manically and with little regard for damaging everything else in the process.

For example, one early task involves getting a rather large video projector from one end of the office to the other. You can move people around and slowly push the projector upstairs and through doorways, or you can plug an electrical cord in from halfway across the room to use as a slingshot, and catapult the projector through walls, destroying everything in its wake. 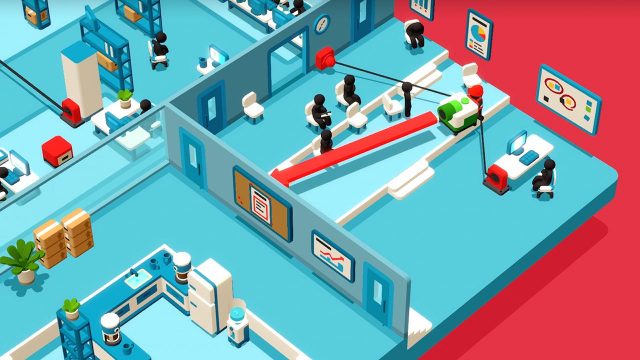 The game has nine floors to play through, ranging from Marketing and Manufacturing to Recreation and Robotics. Each floor offers a genuinely unique series of challenges. There are an incredibly varied set of possible solutions for each task, and everyone will have a slightly different play style. In one early level, you need to reconnect the Internet cable from one end of the office to the other. With a line of people blocking your access to the server room, I picked up a couch and forced it under them to have them all move over, while a friend who played set up an electrical cord slingshot and plowed a filing cabinet through the side of the wall.

You won’t be able to do this with every puzzle, however. Some puzzles see you driving forklifts to pick up packages that are well out of reach, while others will see you corralling workers by plopping them onto conveyor belts and forcing them back to work.

Good Job! has a charming little style that is one of the most colourful games on Switch. With a bold, bright colour pallette, it really brings the cartoonish nature of what you’re doing to life.

Music in the game is a bit on the repetitive side, with a similar whimsical background music you would expect to hear in The Sims or, well, in an actual office elevator. It’s not much more than that, but we’re not sure how it could be. The game doesn’t exactly demand an orchestral score a la Dark Souls. Sound design itself, however, is top notch. There are plenty of breakable objects scattered throughout the world that break with the convincing shatter of an expensive crystal chandelier. 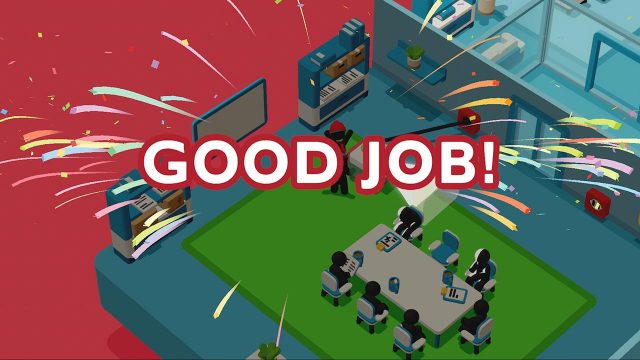 One minor quality of life improvement Good Job! developer Paladin Studios could make is character movement. The player character moves incredibly slowly, and while this can be good for fine-tuned movement, there are times when you need to get from one side of the building to the other, and a sprint button would be nice here. Movement of small vehicles like the forklift is also encumbered by the static camera. Because there is only a single isometric camera angle, when driving the forklift, if you start driving towards the camera, left becomes right and right becomes left. If you’re trying to complete a task carefully and without doing a ton of damage, this can be really infuriating.

That said, this game isn’t for those people who are trying to keep absolutely every single item intact. It’s supposed to be a fun distraction from daily life, and perhaps give people working in these actual real-world roles an outlet for a bit of destruction that would almost certainly get them fired otherwise.

The game does a good job (sorry, we had to) of being a casual game that will delight gamers with some simple tasks that can get as wild and destructive as they make it. Also, at a penny under $20 USD, it’s a worthy contender for your library.