NOTE: Full spoilers for this episode of, “Rick & Morty” are present in this review

Rick & Morty has returned to the airwaves, to present the second half of its fourth season throughout this May! The show’s unusual distribution model has thankfully allowed it to re-appear on schedule, unaffected by the ongoing COVID-19 pandemic that continues to disrupt virtually all forms of entertainment in the real world (this episode even makes a joke about said pandemic, in a rather shocking and timely fashion!), and that’s great news, since, “Never Ricking Morty” presents this season’s anthology-style episode! This is yet another attempt to keep exploring the randomized, unpredictable assault of non-canonical storylines that first began with Rick & Morty’s introduction of, “Interdimensional Cable” during Season One, and fortunately, “Never Ricking Morty” is the show’s most successful attempt to replicate that style of storytelling once again, with a fresh new twist!

As with much of Season Four up to this point, “Never Ricking Morty” also takes plenty of jabs at Rick & Morty’s own self-aware popularity, rabid fanbase, and other potentially troubling elements of modern American consumerism. This not only creates a lot of exciting opportunities for jokes, but also cleverly frames the episode around a creative plot device, as Rick and Morty find themselves trapped on a train full of random denizens that tell various stories about Rick. There are very clearly nods to various large-scale, anthology-style movie and TV universes here, particularly in regards to shared cinematic universes like those of Marvel and the Star Wars franchise, and if you think you can see where the thematic commentary is going for much of this episode, you’re probably right!

Fortunately, the train constantly pulling Rick and Morty into non-canonical space is very funny and off-the-wall, while giving us peeks at tons of non-sensical Rick & Morty plotlines that never were. This primarily kicks into gear after Rick and Morty are forced to battle the train’s ticket taker, an unnaturally muscled combatant, who is apparently a man playing a simulation of the train within the Blips & Chitz arcade, which you may remember from a couple of seasons ago. When the man ends up being bifurcated in supposed real life just like he eventually is by Rick in the game however, the continuity and context of what’s going on with Rick and Morty themselves begins to become undone.

As they move in and out of arcades, educational videos, and other narrative non-sequiturs, Rick and Morty eventually provoke the attention of the ‘Story Lord’, voiced in a fun guest turn by Paul Giamatti. The Story Lord is out to capture and mine Rick’s and Morty’s franchise appeal, in order to take the train to its logical final destination, “The Fifth Wall.” This is clearly a jab at how anthology-style storytelling, especially in relation to shared universes, is forcibly stretched out and mined forever, often making illogical turns, and forcing pointless spin-off efforts, simply to keep endlessly milking franchise money out of bled-out brands. It’s also another predictable jab at Rick & Morty’s own ever-hungry fanbase, with even Rick and Morty themselves saying that they can’t go on forever, and not every idea for them is necessarily a good one. This is a great way to build on the fallacy of fan ownership that’s satirized earlier in the episode as well, as the train’s passengers keep arguing, disputing and discrediting every Rick story that they’ve each cooked up. 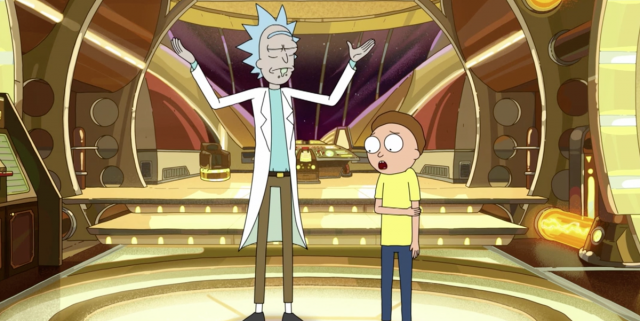 And what does it all amount to in the end? The entire train simply being a toy that Morty purchased from the Council of Ricks’ gift shop. This is such a darkly hilarious commentary on the uselessness behind consumerism for consumerism’s own sake. This is also where that especially funny nod to Coronavirus comes in to boot, namely via Rick, who not-so-subtly lampoons reckless, self-absorbed people that put consumerism above their own health and safety. This ultimate payoff wonderfully concludes a fresh, biting way to make Rick & Morty’s anthology episodes feel especially invigorating and interesting again, even if the lack of the other Smith family members is a bit of a bummer. We do see Summer and Beth very briefly at least, in a very amusing joke about contrived, sloppy writing, and how it routinely fails the Bechdel Test, wherein two female characters must have names, while interacting about something other than a man. Still, it is a bit of a let-down that the rest of the Smith family, among other familiar Rick & Morty personalities, don’t properly appear in this episode, even though they definitely could have lent themselves effectively to the zany insanity going on in the train.

So far, the back half of Rick & Morty’s fourth season appears to be being kicked off exceptionally, with lots of hilarious consumer commentary, along with more fanboy and shared narrative roasting that has come to define an especially big part of this season. The meta train device helps to effectively revitalize the anthology episodes that seem to appear once a season, as per tradition, while the final punch line of everything being a cheap gift purchase for Rick from Morty feels so brilliantly true to this show’s sardonic, nihilistic tone. As much as the characterization isn’t all it could have been here, “Never Ricking Morty” nonetheless soars from a comedy and creativity standpoint, proving that this season still has lots of standout ideas left to explore, while providing another sublime entertainment option as we continue to wait out the COVID-19 lockdowns.

Rick and Morty 4.6: "Never Ricking Morty" Review
Rick & Morty returns with a brilliant and funny new twist on its anthology episodes this week, as Rick and Morty find themselves on a cosmic train that's rapidly spinning out of narrative control.
THE GOOD STUFF
THE NOT-SO-GOOD STUFF
2020-05-05
88%Overall Score
Reader Rating: (0 Votes)
0%