Harley Quinn has really been soaring throughout much of its sophomore season, even after the incredibly quick turnaround between its first and second batches of episodes. That hot streak continues this week, with another deviation from the show’s usual format and narrative direction, albeit one that returns to the perspective of Harley Quinn’s eponymous anti-heroine. Specifically, “All the Best Inmates Have Daddy Issues” presents an in-depth look at the former Dr. Harleen Quinzel’s first fateful meeting with both Joker and Poison Ivy, the two main people that would set her on the path to becoming this animated universe’s can-do criminal ‘queenpin’ that Harley is today.

This week’s Harley Quinn episode is also distinct on account of its sidelining of humour for the most part, in favour of a more character-focused, straight telling of Harley’s psychiatrist origins at Arkham Asylum. This is kicked off by a long-teased plot twist that finally sees a payoff this week, namely Harley and Ivy discovering that an aggressively unremarkable, friendly and domesticated bartender at a local pub is actually the Joker!… Even if Joker is now fully sane, and doesn’t seem to be aware of his former criminal identity. After using a smartphone app to positively determine the Clown Prince of Crime’s identity with a quick sketch job (in one of this episode’s few, but very funny jokes), Ivy decides that the best course of action is to kill the Joker while he’s evidently amnesiac and helpless, but Harley stops her, stating that the two women, “Can’t kill a normie.” 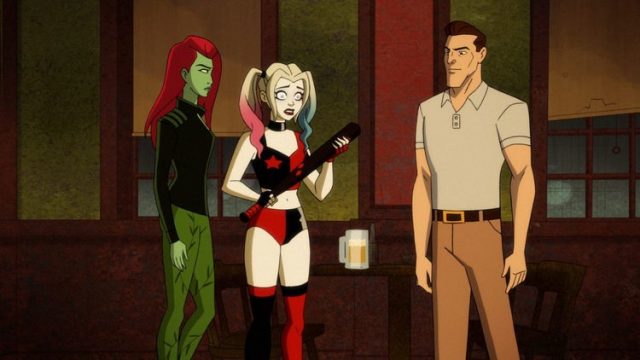 Thus begins a look into the past, as Harley tries to argue to Ivy that people can change, using the proof of their first meeting at Arkham Asylum as justification. What follows is easily one of the smartest and most memorable episodes that Harley Quinn has yet delivered as well! That’s saying quite a lot, since this show has really been on a roll during its second season especially. This latest origin story for Harley does still hit some familiar beats that Batman/DC fans may expect in advance, mind you, such as the Joker constantly deceiving and manipulating Harley during their supposed, “Therapy”, as well as Ivy being aggressive and hateful towards Harley in the beginning, only to eventually find renewed hope when she sees Harley’s genuine compassion toward the inmates at Arkham.

Despite these familiar plot elements however, this episode offers a pretty fantastic blend between recognizable story trappings and all-new ones, which help the latest Harley Quinn origin story stand apart from the many others that have been portrayed throughout various DC media. Chief among this show’s more unique story turns is the revelation that the Harley Quinn universe’s Harvey Dent, who was visiting Arkham during Harley’s first day there, was an aggressively corrupt, egotistical political opportunist with no regard for actual human life, and an obsession with voting polls, even long before he was scarred and transformed into Two-Face. The eventual revelation that Harley herself coined the name, “Two-Face” in this universe is another of this episode’s best, most surprising jokes to boot, particularly when Harley sarcastically tells Ivy after indicating this that she never received a single royalty.

There’s also a very effective ticking clock layered throughout this episode’s flashback tale, namely Harley starting at Arkham on the exact day that Joker has declared a bomb being hidden somewhere in Gotham City. Commissioner Gordon, Harvey Dent and Batman alike have all failed to get any solid intel from Joker on the bomb’s location, necessitating that Harley try and coax the answer out of Joker through advanced psychological investigation. This brilliantly sets the stage for this show’s particular take on the twisted Harley/Joker relationship, while also displaying the limitations of Batman in the battle against Joker, namely that Batman’s efforts to beat the answer out of Joker don’t work, while Joker is more inclined to actually open up to Harley, who steps into Joker’s cell against advisement, and is the only one who attempts to, “Get his jokes.”

Inevitably though, even Harley is eventually screwed over by Joker, with horrifying results! After Harley gets the answer that Joker’s bomb is hidden in, “The heart of Little Italy”, Batman and Gordon rush over to that location in Gotham, leaving Dent at Arkham. The problem however is that Joker obfuscated the fact that he was referring to the literal heart of Arkham’s chef, who is also nicknamed, “Little Italy”, and deviously counted on Gordon and Batman assuming that the bomb was planted at a city landmark. After the chef explodes and blasts a hole in the wall, Joker then makes an escape from Arkham, dragging Harley in tow! This is already a smart climax, one that’s made all the better when Dent attempts to shoot Joker, and kill a captive Harley in the process, to preserve his election prospects! Fortunately though, Ivy ultimately intervenes, disabling Joker, saving Harley, and getting herself put back in Arkham after her escape attempt. Even then though, Ivy begins therapy with Harley, thus revealing how Ivy saw fit to trust and want to help Harley when Harley herself was locked up in Arkham, way back during the first episode of this series. 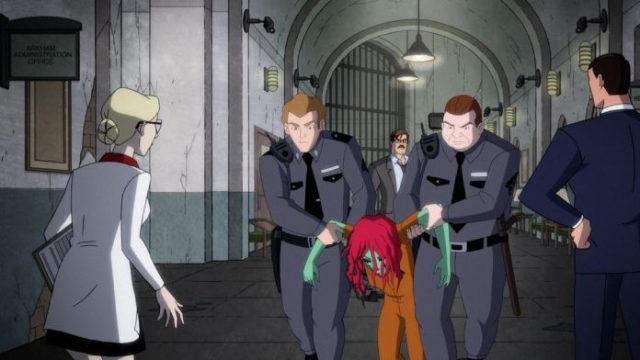 Ultimately, Harley and Ivy agree to disagree on their debate over whether people can change in the present. Doctor Psycho soon after determines that Joker has indeed forgotten his entire career as the Clown Prince of Crime too, as well as anyone he knew during that time, including Harley and Batman. It would seem then that this startling discovery truly is goodbye between Harley and her psychotic ex-boyfriend, save for an over-the-top cackle after ‘Joker’ receives a picture from his girlfriend’s kids, with faces full of pasta sauce that appear bloodied at first glance. “All the Best Inmates Have Daddy Issues” thus perfectly wraps up an overall stellar, clever and character-rich showcase of Harley’s professional origins in the Harley Quinn universe, as well as her first meeting with the two most influential people in her life. This is Harley Quinn at its smartest and most interesting, if one accounts for the sidelining of humour in this case. A comically overblown ‘arrest’ for Harley and Ivy by Two-Face at the end of this episode would appear to suggest that Harley Quinn will return to its more kooky, deranged comedy stylings next week, but for now, it’s awesome to see such an interesting and influential new layer to Harley get fleshed out. Hopefully these revelations keep paying off next week as well, when Harley is forced to re-confront the re-appointed D.A. of new New Gotham!

Harley Quinn 2.6: "All the Best Inmates Have Daddy Issues" Review
Harley Quinn delivers another of its best episodes yet this week, as Harley's early professional years at Arkham Asylum are explored, including her first encounters with Joker and Ivy.
THE GOOD STUFF
2020-05-13
95%Overall Score
Reader Rating: (0 Votes)
0%