The DC Universe streaming platform has largely carved out a specific niche of original content for the DC faithful. Many of the streamer’s original shows are dark, broody and often violent in tone, a precedent that was set from the jump with DC Universe’s hard-R-rated flagship series, Titans. Just about every DC Universe original series at this point is made specifically with mature adults in mind to boot, with even the platform’s resurrection of Cartoon Network animated series, Young Justice seemingly prioritizing appealing to viewers that are at least well into their 20’s now. That’s why it’s both refreshing and a little odd that DC Universe’s first wave of original TV programming (and hopefully not its only wave, considering WarnerMedia’s growing amount of focus on soon-releasing streaming platform, HBO Max), is ending with a considerably more light-hearted series, along with one that could reasonably be enjoyed by viewers that are younger than twentysomethings.

Stargirl, not to be confused with this year’s wholly unrelated Disney+ movie of the same name, revolves around a more recent addition to the DC superhero pantheon, Courtney Whitmore, a high school sophomore named for the late, tragically killed sister of DC’s former CCO, Geoff Johns, who also serves as an executive producer on this series. Courtney is meant to be the modern successor to a long line of DC superheroes that operated under the name ‘Starman’, dating all the way back to 1941. In fact, Courtney may look at least somewhat familiar to avid fans of live-action DC television, since she’s already been featured in different live-action incarnations on both Smallville and Legends of Tomorrow, played by Britt Irvin and Sarah Grey, respectively, though this new Stargirl series represents a take on the character that’s much more close in tone and presentation to Stargirl’s early history in DC Comics lore. 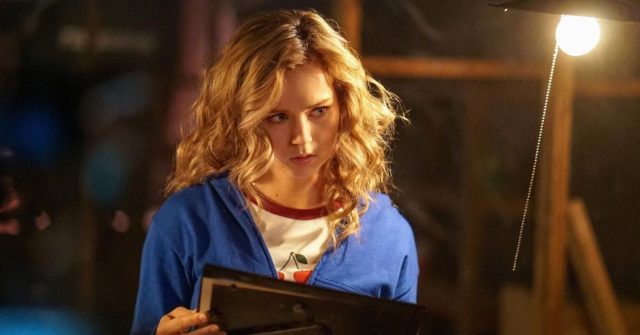 Also of interest is that Stargirl, much like the upcoming sophomore season for DC Universe’s Doom Patrol, is not exclusively being hosted on DC Universe in the U.S. While American DC Universe subscribers get first dibs on new Stargirl episodes on Monday’s, each new episode of Stargirl will also air during the subsequent Tuesday night, at 8:00 PM, on American broadcast channel, The CW. If you’re a Canadian DC fan, hopefully you have access to a cable package that includes an American CW channel as well, because that’s currently the only way to watch Stargirl here in Canada, without pirating it, or using a VPN. Stargirl doesn’t seem to have any officially confirmed, Canada-specific distribution plan at this point, possibly because the TV industry has been temporarily halted by the ongoing COVID-19 pandemic. Still, at least Canadians having access to American CW channels with some cable packages makes the wait less unfair than usual, much like DC Universe’s other currently-airing series, Harley Quinn’s Canadian broadcasts on Adult Swim, which are in turn only staggered by one day from their American DC Universe premieres on Friday’s.

So, with that convoluted explanation of Stargirl’s creation, inspiration and current broadcast rights out of the way, what exactly is Stargirl, as a television series on its own merits? Well, it’s a teen superhero drama that stars the eponymous character, beginning when she and her family pack up and move to Blue Valley, Nebraska, one of many fictional locales that are specific to the DC Universe. Naturally, Courtney, now played by Bella and the Bulldogs’ Brec Bassigner, has some trouble transitioning to her new surroundings, despite the best efforts of her well-meaning mother, Barbara Whitmore, played by Road Trip’s Amy Smart, and good-natured stepfather, Pat Dugan, played by Old School alum, Luke Wilson. Courtney’s life changes even more after discovering a mysterious box in her basement as well, which happens to contain the Cosmic Staff, a dormant artifact that could previously only be wielded by the late superhero, Sylvester Pemberton, a.k.a. this TV universe’s Starman, played by Community’s Joel McHale. As it turns out, the staff responds to Courtney, because we wouldn’t have a show otherwise.

This premise is not unlike the Spielberg-dominated family cinema era of the 1980’s, namely how it involves a young misfit protagonist, bored with their life in a small, quiet community, ending up being swept into an extraordinary adventure on a whim of pure chance, with a DC twist in this case. Stargirl’s Cosmic Staff is even sentient, cutely signaling various things to Courtney, and pulling her to various locations, like an adorable, mute sidekick. After Courtney’s initial shenanigans with the Cosmic Staff predictably lead to some trouble for the archetypal school bully as well, Pat also learns that the Cosmic Staff responds to Courtney, thus revealing his own past as the former sidekick of the late Starman, “Stripesy.” If you think you can see where this is going, you’re probably not alone. Pat’s past career as a faithful superhero buddy will finally give him a chance to bond with his displaced, hormonal adolescent stepdaughter, especially when it turns out that Pat’s vintage car transforms into a giant robot mech called ‘S.T.R.I.P.E.’, because of course it does.

Of course, heroes are only as good as their villains, and Stargirl certainly has plenty of recognizable DC villains to spare, right from the start! These baddies manifest as members of the ‘Injustice Society’, a sect of powerful criminals, most of which are metahumans with superpowers, who are responsible for massacring their heroic counterparts, the Justice Society of America, along with killing Starman, ten years ago. Sure, this makes for a corny, shallow band of themed villains so far, but I do have to respect Stargirl for staying unapologetically true to its comic book roots, even if the titular heroine hasn’t even formed her superhero identity yet, and is left to merely fumble her way through an intentionally awkward climax here, wherein she dodges an attack from Injustice Society agent, Brainwave. It’s not the high-powered thrill ride that some DC fans may be hoping for, at least not yet, but there’s something infectiously lovable about Stargirl’s tone, even if the show is a little cheesy and cliched so far.

With such a robust cast of recognizable DC characters in Stargirl as well, one may wonder how this series may connect to other live-action DC properties, or if it operates in a shared universe. Well, if you happened to catch The CW’s record-breaking five-episode crossover event, Crisis on Infinite Earths during this past Winter, you would have glimpsed a first look at Stargirl’s characters existing on a brand new Earth-2 during the epilogue, one that spawned from the dead remains of the pre-Crisis Earth-2 that originally served as a key story location on dedicated CW series, The Flash. Since the Arrowverse characters currently believe that the live-action DC Multiverse was destroyed in the wake of Crisis on Infinite Earths as well, this effectively isolates Stargirl into its own self-contained universe, one without a direct connection to other live-action DC media at this point. The fact that this post-Crisis Earth-2 is not far from The CW’s new, fully shared ‘Earth-Prime’ universe in the post-Crisis live-action DC Multiverse however, along with the fact that Stargirl is co-hosted on The CW to begin with, does seem to flirt with the idea that Stargirl could potentially cross dimensions, and intersect with a series like The Flash someday. For now though, Stargirl operates purely within its own self-contained world, disconnected from The CW’s other, fully dedicated DC dramas, or any other DC shows for that matter, and that’s probably ideal.

In the end, this pilot episode’s storyline hits a lot of familiar notes, and doesn’t really push the boat out in terms of storytelling surprises. The destruction of the Justice Society of America is chronicled at the hands of the Injustice Society, ten years go by, Courtney Whitmore and her family move to Blue Valley, Courtney makes an impression at her new high school by defending some other misfit kids, Courtney finds the Cosmic Staff, Courtney causes some trouble with the Cosmic Staff, Courtney is targeted by an Injustice Society member, Courtney is bailed out by her formerly uncool stepfather, who happens to be a former superhero sidekick. This series debut for Stargirl hits many of the exact narrative notes that you would expect it to. Despite that however, Stargirl is wonderfully lovable, upbeat and wholesome, and that feels like the exact kind of DC Universe series that our own pandemic-ravaged world needs right now. It’s not a complicated show, but Stargirl is nonetheless charming and well-made, and provides a welcome reprieve from the pretty much exclusively dark, snide and extra violent DC Universe original shows to come before it. It has room to grow for sure, but Stargirl’s potential is easy to invest in, especially if you happen to prefer the lighter side of the DC Universe to begin with.