NOTE: Some spoilers from throughout the first season of, “Batwoman” are present in this review

After making her big debut during 2018’s Elseworlds crossover event, shared between Arrow, The Flash and Supergirl, the Arrowverse’s Gotham City-based vigilante, Batwoman was quickly confirmed to be headlining her own spin-off series, the third spin-off series to be specifically green-lit for The CW’s shared DC television universe. Batwoman then premiered on The CW during Fall 2019, barely getting a chance to get its feet wet within the Arrowverse’s original Earth-1 setting, before it, alongside The CW’s other recent and ongoing DC dramas, ended up being swept into a whole new universe, in the wake of the subsequent Crisis on Infinite Earths crossover event. This signified a rather awkward time for Batwoman to join The CW’s shared DC continuity, but that often ended up being the least of the show’s problems, considering the rather extensive amount of growing pains that Batwoman suffered through during much of its debut season.

The good news is that Batwoman does more reliably find its narrative footing in Season One’s back half, once the show is taken out of Earth-1, and is rolled into the new, post-Crisis Earth-Prime universe. Even then however, the show suffers through several faulty episodes, eventually grasping a cohesive and engaging season arc well into the back half, almost too late in the game for it to matter. Even considering all of the show’s problems in Season One, Batwoman is now in for another major change-up before its sophomore season begins airing in January to boot, namely the fact that its lead actress now needs to be recast. In a move that’s pretty much unheard of in superhero television, lead star, Ruby Rose announced that she was vacating the eponymous role in Batwoman, which already promises a very different, and hopefully much more consistent, Season Two next year.

Despite that hope though, Rose wasn’t often the problem with Batwoman’s mostly disappointing debut season. Rose’s Kate Kane/Batwoman can certainly hold her own in a fight, and her dry, biting wit can be legitimately charming at times. It’s even appreciated that Batwoman isn’t afraid to show its titular heroine making mistakes, sometimes rather dumb ones, in fact, which paint a legitimately grounded, more sympathetic take than you might initially expect from yet another female empowerment-driven superhero series on The CW. Even then though, Rose didn’t necessarily bring something to the part of Batwoman that another, similarly capable actress couldn’t replicate. She didn’t ultimately have enough time to make the role of Kate Kane/Batwoman her own, in contrast to Stephen Amell’s Green Arrow, Grant Gustin’s Flash or Melissa Benoist’s Supergirl, who have brought so much to their respective live-action DC headliners that it’s impossible to imagine them being recast in the Arrowverse at this point.

On the note of that fluid identity for Batwoman herself, a huge issue with Batwoman’s early Earth-1 episodes is that the show didn’t really know how to stand out among The CW’s increasingly crowded DC series lineup. Whenever Batwoman wasn’t contriving ludicrous, forced emotional drama, it was blatantly stealing story ideas from Arrow and Supergirl, initially begging the question of why this latest Arrowverse spin-off even existed in the first place. Fortunately, Arrow concluding its eight-season run at the start of this year is another thing that eventually worked in Batwoman’s favour, allowing it to function more independently as a street-level superhero drama, one that eventually managed to find its own creative voice. This primarily happened when the series stopped over-focusing on the supposed novelty of its lead character’s sexuality and gender identity (this was an even worse idea when it started to downplay the significance of Supergirl’s Alex Danvers and Black Lightning’s Anissa Pierce/Thunder as lesbian heroes on The CW), and started better crafting worthy threats and obstacles for Kate to contend with. 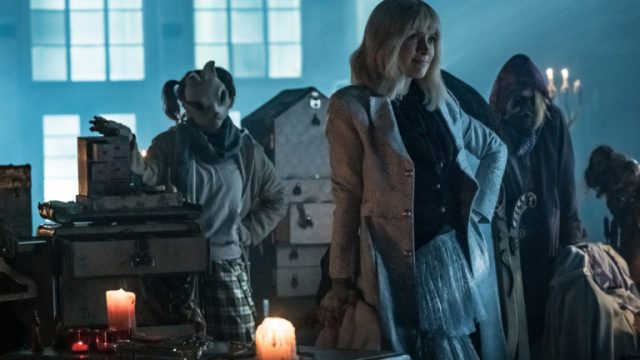 These better threats begin to eventually manifest around a murder conspiracy involving the missing Batman’s late gadget-maker and tech expert, Lucius Fox, who was killed in what appeared to be a botched robbery many years ago. With Lucius’ son, Luke serving as Kate’s own key ally and confidant as Batwoman, the conspiracy was given some solid emotional stakes, especially when it inevitably became apparent that Lucius Fox was killed for reasons relating to a mysterious criminal organization. While this mystery’s ultimate explanation had to be pushed to next season, due to Batwoman’s first season losing two planned episodes to the ongoing COVID-19 pandemic, the mystery and foreshadowing behind Lucius Fox’s death plays a huge role in pulling Batwoman out of the narrative muck.

Better still is that this later point in the season finally starts making better use of the handful of Batman Family villains that seem to be accessible to the Arrowverse at this point. Another thing evidently hamstringing Batwoman’s writing, at least for now, is its close proximity to FOX’s recently-concluded Batman Family-inspired drama series, Gotham. Since Gotham already portrayed a lot of major storylines surrounding many of the most recognized and iconic Batman Family villains, Batwoman is thus left to subsist on the table scraps of the Batman Family villain catalogue, at least in Season One. Some of these villains, such as Rachel Skarsten’s lead arch-nemesis, Alice, Kate’s mentally broken sister, Beth Kane in reality, are awesome right out of the gate. Some others, like Tommy Elliot, a.k.a. the Bruce Wayne-obsessed Hush, are initially awful and misrepresented in the early episodes, before better falling in line with their DC Comics inspirations later in the season. Granted, Batwoman often seems to suffer from the same disposable villain-of-the-week problem that’s frequently served as the Achilles’ heel of just about any DC-themed CW drama to date, but at least the series eventually comes up with better, more balanced villains in Alice and Hush most notably, even if many of the best Batman Family villains nonetheless seem to be off-limits to the show at this point.

An especially big theme running through Batwoman’s first season though, beyond the threats posed by its villains, is the power of family, both the best and worst of it. After taking up her mantle as Batwoman, for example, Kate finds herself at odds with high-powered security agency, the Crows, the private military company hired to protect Gotham City, after Batman abandoned it three years prior. The Crows are not only headed up by Kate’s father, the gruff, no-nonsense Jacob Kane, but one of their best lieutenants also happens to be Sophie Moore, Kate’s ex-girlfriend from military school. On one side of the fence, Jacob and Sophie often make it their mission to hunt Batwoman, while Kate’s adoptive sister, Mary Hamilton, a vapid, but deceptively brilliant (if also frequently annoying) medical student, who runs an underground clinic, quickly cements herself as the one most inclined to champion the support of both Kate and Batwoman. Mary’s character is particularly rough in the early Batwoman episodes, where she’s consistently irresponsible, unethical, and almost always insufferable. After her mother, military tech bigwig, Catherine Hamilton-Kane ends up being murdered by Alice during Batwoman’s midseason finale however, Mary’s character eventually improves to a considerable degree, namely by eventually becoming more mature and reasonable, despite also still being a little irritating in certain episodes.

This just leaves the expected elephant in the room, namely the fact that Batwoman, like Gotham before it (and spiritual Gotham offshoot, Pennyworth to an extent), is unable to properly portray Batman. Batwoman’s superb season-ending cliffhanger at least promises a virtual return for the Arrowverse’s formerly-unseen Bruce Wayne next season, after Hush is given the face of his obsession as a reward for his loyalty to Alice, but as expected, Batman is out of bounds for the Arrowverse. It’s made very clear that Batman exists in the Arrowverse, having had a long career defending Gotham City from familiar off-screen villains like Joker, Riddler and Scarecrow, even on the now-destroyed Earth-1, but Batman’s mysterious disappearance has left Gotham unprotected for years, before Kate has Luke modify Batman’s nigh-invulnerable Bat Suit, so she can emerge as successor superhero, Batwoman. To Batwoman’s credit, it doesn’t really need Batman to be interesting and successful on its own merits too, though Gotham did already prove that you can make a good Batman Family-inspired show, even without Batman himself. Still, it is worth noting that the lack of the original Dark Knight isn’t what drags Batwoman down during its too-frequent low points in Season One.

What does drag Batwoman down in its debut season are the excessive instances where it’s more concerned with adolescent melodrama and tedious virtue signaling, rather than telling a good story, one that it doesn’t have to poach from another Arrowverse show. Batwoman does at least start better moving away from its CW-approved teen angst in Season One’s back half (which, as with Supergirl, is rather out-of-place in a show with a main character that’s supposed to be a successful, grown-ass woman!), but like I said, the frequent growing pains throughout Batwoman’s debut season are often frustratingly evident. Overall, Batwoman ultimately manages to be passable in Season One, even after losing two planned episodes to production difficulties stemming from the COVID-19 pandemic, but you definitely have to rough it through its especially bad early episodes, in order to get to the better stuff later on. Batwoman still has a lot of potential that it can possibly better realize in future seasons though, and hopefully a recast lead actress can help make that possible too.

I’m cautiously optimistic for what’s to come with Batwoman, considering that it will no doubt be making some big changes for Season Two, after having to swap out its lead actress. Despite that though, I’m not yet sold on this series being the next big thing for the Arrowverse, nor am I sold on the necessity of the Arrowverse centering an entire series around a Gotham City and a Batman Family that it obviously can’t fully represent. Still, perhaps Batwoman can eventually find its own unique contribution to the legacy of Batman Family media, even if it’s one that may end up being rather far divorced from the conventions we’ve frequently come to love from Kate Kane’s more recognized and celebrated cousin.

Batwoman: Season One Review
Batwoman's first season is frequently uneven and disappointing, but it does manage to better find its footing towards the end, despite being unable to leverage most of the Batman Family characters and history.
THE GOOD STUFF
THE NOT-SO-GOOD STUFF
2020-05-26
66%Overall Score
Reader Rating: (0 Votes)
0%