Stargirl may not have burst out of the gate with the same kind of head-turning excellence that Doom Patrol and Swamp Thing before it certainly did, but the series’ first episode was nonetheless a refreshing reprieve from DC Universe’s otherwise dark, highly adult-oriented original series catalogue. This week’s second episode for Stargirl also stays on mostly the same note, building on the initial establishment of Courtney Whitmore/Stargirl as a budding heroine, while also better developing her new, “Sidekick.” As its title suggests, “S.T.R.I.P.E.” splits its attention between Courtney and her stepfather, Pat Dugan, continuing to provide a charming foundation for this show’s budding heroes, even if the villains are still struggling to keep pace in terms of development.

This episode also begins immediately where the pilot episode ended, with Pat whisking Courtney back home, and scolding her for engaging Brainwave. Courtney just barely got away with her life, but she’s nonetheless determined to keep investigating and battling the Injustice Society, particularly to get revenge for the late Starman. Pat, however, is insistent that he take on the mission against the Injustice Society by himself, being the last remaining connection to the since-obliterated Justice Society of America. This logically leaves Pat expressly forbidding Courtney to continue provoking Brainwave, though needless to say, Courtney does not follow this advice in the slightest. 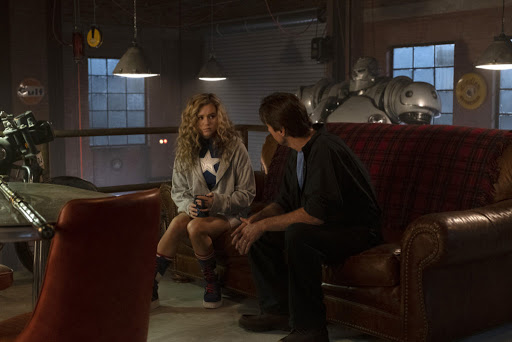 The best part of this episode is seeing the complementary, initially strained, but eventually lovable heroic chemistry between Courtney and Pat develop. Even as the two undertake their own separate series of heroic tasks, they end up converging against the same threat, Brainwave. The duality in the significant age difference between Courtney and Pat is also nicely highlighted, with Courtney shorting out every sewing machine at Blue Valley High in order to re-purpose Starman’s old costume into something that she can wear as a fledgling superheroine, while Pat does the more sensible detective work, including continuing to experiment with his giant mech, S.T.R.I.P.E.

It’s quite clear at this point that the Injustice Society is lurking around Blue Valley in secret as well. Indeed, the show heavily tips its hand to this effect, when Blue Valley High holds an open house with the parents and students, and makes sure to directly point out how much the school, including that tire business that Courtney ended up battling Brainwave upon the turf of, is funded by the undercover members of the Injustice Society. Any DC fan with even a passing familiarity with the Justice Society of America or the Injustice Society of America could already peg Sportsmaster as Pat’s over-enthusiastic, fitness-obsessed new personal trainer during last week’s pilot episode, who also shows up at the open house with his wife, Paula Brooks, a.k.a. Tigress. Brainwave is also hiding in plain sight as Dr. Henry King Sr., though the show already revealed his identity, as the domineering father of resident Blue Valley High bully, Henry King Jr. Oh, but this week, we learn that Brainwave is also a brain surgeon that works alongside the mother of one of the school rejects that Courtney awkwardly eats lunch with. Fair enough, I guess. 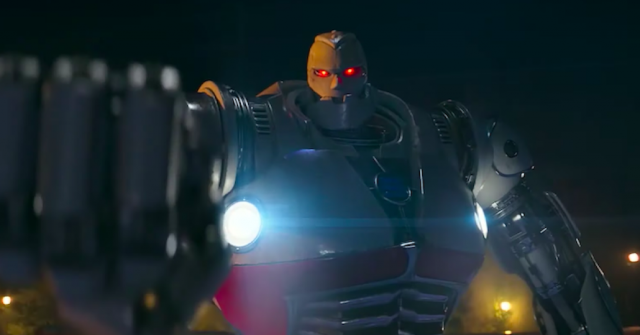 Unfortunately, the Injustice Society is still struggling to generate much interest for now. There’s probably going to be a payoff to all of this foreshadowing and mystery eventually, but like I said, most avid DC fans can already easily pick out the Injustice Society members among Blue Valley’s elite. Even people who aren’t extensively familiar with DC media can probably put together that Stargirl drawing so much attention to these characters, while intentionally not developing them at this point, is not an accident. Likewise, Barbara Whitmore and Mike Dugan also continue to be lost in the shuffle of the show’s origin plotting for Courtney and Pat. This is another problem that I’m sure will go away with time, but the Whitmore/Dugan family feels a little plain so far, despite the extraordinary superheroes in their ranks.

Fortunately, even if its budget is hardly on the level of Hollywood, Stargirl continues to deliver some solid action in its climax, which is especially apparent on The CW, where the dedicated DC programming is particularly low-budget. After Brainwave inevitably locates Courtney at the open house, he demands that Courtney turn the Cosmic Staff over to him, lest he kill Barbara. Pat attempts to handle the situation himself, in S.T.R.I.P.E., naturally, but is nearly killed for his efforts. Once Courtney intervenes however, she’s able to land some decent blows on Brainwave, before the Cosmic Staff reacts with Brainwave’s mind, rendering him comatose. This naturally doesn’t sit well with Henry King Jr., but Courtney isn’t fussed for long. Instead, she asks Pat the obvious question of which Injustice Society member they’re going to take down next. 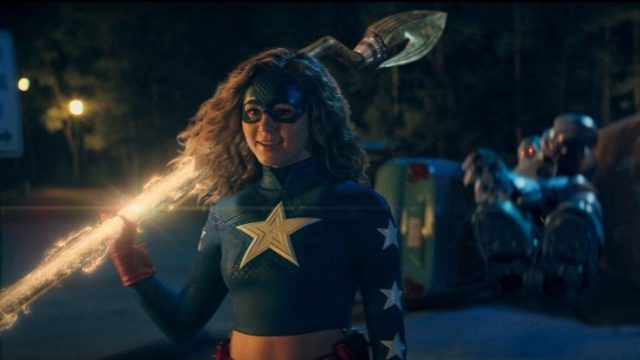 It’s established in this episode that Icicle is the leader of the Injustice Society in the Stargirl universe, and he appears to be Courtney’s and Pat’s next quarry. The wholesome, lovable energy behind Stargirl is continuing to function pretty well, though like I said, the battle against the Injustice Society could use a bit more stakes, since we still know far too little about them, and why they’re all hiding among the population in Blue Valley. “S.T.R.I.P.E.” does continue to lean into the established strengths of Stargirl however, while also continuing to nicely flesh out the chemistry between the eponymous heroine and her stepfather. The series definitely doesn’t have the depth of Doom Patrol or Swamp Thing at this point, or even Titans for that matter, but Stargirl is still succeeding as a more light-hearted dessert to current real-world events, as well as DC’s streaming catalogue previously almost going out of its way to exclude younger audiences.

Stargirl 1.2: "S.T.R.I.P.E." Review
Stargirl stays on the same wholesome, if simplistic gear this week, nicely fleshing out the heroic chemistry between Courtney and Pat, while continuing to gloss over the agenda of the Injustice Society.
THE GOOD STUFF
THE NOT-SO-GOOD STUFF
2020-05-27
80%Overall Score
Reader Rating: (0 Votes)
0%