With the Zephyr having jumped through time again, continuing to follow the trail of the Chronicoms, the heroes of Agents of S.H.I.E.L.D. have now found themselves in another new era, against another new obstacle. Longtime Marvel Cinematic Universe enthusiasts who have enjoyed ABC’s Marvel Television offerings in particular are also in for a treat this week! “Alien Commies from the Future!” displaces the team in 1955 this time, conveniently near Area 51, which just so happens to be where the Chronicoms are planning to strike next. Since Area 51 is a S.H.I.E.L.D. base, this inspires Coulson and Simmons to employ some creative means through which to sneak into the base, and stop the covert Chronicom attack.

This mission begins in a rather challenging fashion, after the agents discover a high-ranking defense agent, Gerald Sharpe, within a nearby diner. Kidnapping Sharpe and hiding him on the Zephyr, Mack, Yo-Yo and May then take turns interrogating him. Sharpe, however, being a typical American patriot stereotype of the era, laughs off every attempt at interrogation, since every agent that attempts to talk to him isn’t Caucasian. Even when Deke takes a run at the guy, he still mostly gets nothing as well, at least beyond a key bit of intel that puts the rest of the mission into focus; The new cold fusion reactor that S.H.I.E.L.D. is looking to test at Area 51 doesn’t actually work, because nothing on Earth can power it. That’s bad news, since a Chronicom power source isn’t from Earth, and can power, and subsequently overload, the reactor just fine! 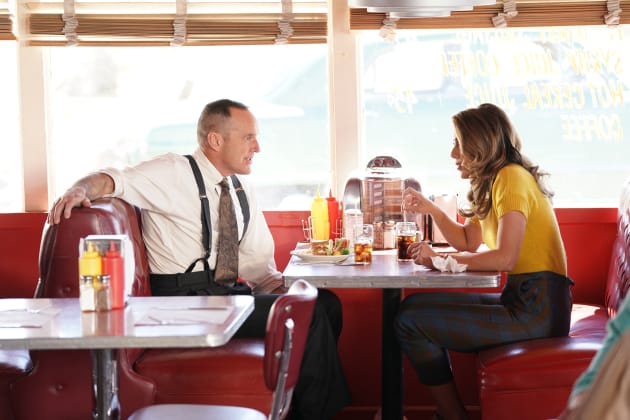 So, how do the agents try to break into the base and solve the situation? By having Coulson impersonate Sharpe, while Simmons impersonates none other than Peggy Carter herself! Yes, just as the previous 1931 events ended up tying into 2011 movie, Captain America: The First Avenger, S.H.I.E.L.D.’s crew now landing in 1955 allows for an excellent tie-in to ABC’s frustratingly short-lived ‘event series’, Agent Carter. This is very exciting, since it could mean that the final season of Agents of S.H.I.E.L.D. may actually fill in some key gaps from the Agent Carter storyline, particularly since that show’s second and final season ultimately ended on a currently unresolved cliffhanger. This promise nicely takes shape before long as well, when Simmons ends up being busted by none other than Peggy Carter’s former colleague and love interest, Daniel Sousa, with Enver Gjokaj reprising his role as Sousa from Agent Carter!

Since we never got a chance to see S.H.I.E.L.D. actually form on Agent Carter, which was likely the finale that the showrunners had originally hoped for, before ABC’s premature cancellation of the show, this episode finally answers a few lingering questions about what became of Sousa after his role on Agent Carter. Sousa has apparently lost touch with Peggy in the years since Agent Carter’s second and final season, seemingly cementing that he isn’t Peggy’s mysterious husband that was alluded to during the events of Captain America: The Winter Soldier (which may very well be Steve Rogers in current MCU canon, considering how Avengers: Endgame ended), but did end up becoming the head of S.H.I.E.L.D.’s West Coast division. This presents Sousa as an interesting unwitting antagonist to the present-day S.H.I.E.L.D. crew, particularly when he arrests Simmons and Coulson before they can root out any undercover Chronicoms, forcing Daisy to pose as a CIA liaison, in order to free her friends.

The material with Sousa is pretty great overall, and next week’s episode promises to flesh it out even more! That’s awesome, since the S.H.I.E.L.D. crew is mostly split up effectively at the actual Area 51 base this week. May and Yo-Yo eventually give up interrogating Sharpe to assist at the base to boot, causing an apparent tear gas attack that eventually roots out the Chronicom hidden among the researchers. I have to say, Coulson and Simmons asking a series of increasingly inexplicable questions to provoke human reactions among the scientists is a lot funnier, but I guess May and Yo-Yo using tear gas is a little faster. This definitely makes for a better payoff than May and Yo-Yo impotently trying to squeeze intel out of Sharpe too, which mostly wastes time, and leaves Mack especially not accomplishing much this week. Deke does use this interrogation to successfully figure out the means of the Chronicoms’ attack, but even this takes far longer than it probably should.

Regardless, this episode still presents a pretty exciting climax. May and Yo-Yo break off to stop a female Chronicom from detonating the reactor, which would simultaneously wipe out all of S.H.I.E.L.D.’s highest-ranking agents and think tank, including Sousa! At the same time, Coulson tries to fight off a male Chronicom, creating a nicely intense climax that almost leads to Yo-Yo being taken out in particular! Ultimately though, Simmons and Daisy manage to rig up an EMP that disables the Chronicoms before their plan is successful, leading to both of them self-destructing before their technology can be appropriated. Coulson, meanwhile, is also deactivated, appearing to undergo some sort of strange glitch, right as Sousa decides to try and get to the bottom of what he’s up against. Hopefully Sousa has shaken off his difficult days of fighting against Whitney Frost and Zero Matter as well, because he’s about to have his world rocked, in what’s hopefully an equally exciting Agents of S.H.I.E.L.D. episode next week!

“Alien Commies from the Future!” presents a very rewarding and unexpected Agent Carter crossover, thanks to the surprise re-appearance of Daniel Sousa, immediately making the agents’ arrival in 1955 feel especially exciting! It’s a bit annoying that several of the heroes had to be wasted on a pointless interrogation subplot this week, which mostly ends up being played for cheap laughs, but the events at Area 51 proper nicely helped to make up for this. Even more thrilling as well is the fact that neither May nor Yo-Yo appear to be in top fighting shape at this point, with Yo-Yo’s Inhuman powers appearing to not function properly anymore, while May appears to be in the throes of heightened aggression, anxiety and PTSD. Both women clearly have some major battle scars from the events of last season, and they couldn’t have come at a worse time, considering that the Chronicoms remain active in 1955! With the Chronicoms repelled for now however, I’m currently most looking forward to hopefully filling in some more stubborn holes in Marvel Cinematic Universe canon, personally, now that ABC and Marvel Television have gained a second chance to rectify the unresolved origin story of S.H.I.E.L.D. proper.