The ranks of Agents of S.H.I.E.L.D.’s heroes have officially grown, thanks to the surprise rescue of Daniel Sousa from his 1955 demise. That’s good, because a Chronicom/Hydra alliance now threatens to undo everything that S.H.I.E.L.D.’s remaining present-day agents have fought for, giving Mack’s crew an especially treacherous new obstacle to battle against in the 1970’s. “A Trout in the Milk” presents a thrilling, sublimely executed operation against the Chronicoms, one that ends up coming back on this show’s heroes in a very unexpected way! This also comes courtesy of not one, but two jumps through the 1970’s, further exacerbated by Simmons beginning to forget details of her mission, right when it matters most.

I know I’m probably repeating myself at this point, but the messy nature of the apparent time travel rules in the Marvel Cinematic Universe continues to work both for and against Agents of S.H.I.E.L.D. here. Despite the Chronicoms seeming to create a linear conflict that must be stopped through repeated jumps across a single stream of time, the continued existence of Deke from humanity’s aborted future under Kree rule still suggests that alternate realities and timelines can simultaneously persist within the MCU. Despite that however, Simmons and Enoch seem to talk as if there’s only one time stream, a detail that definitely confuses Sousa as well, who suddenly has to start poking at all of the little timeline inconsistencies in the MCU after his first time jump with the heroes. It’s often little more than a passing annoyance, but I really hope that there’s a payoff to this wibbly-wobbly, timey-wimey confusion eventually. That said, the idea of Simmons appearing to become confused and forget details about the Zephyr’s time jumping is intriguing, suggesting that the agents are about to have more problems, especially with Fitz continuing to be separated at some other mysterious location. 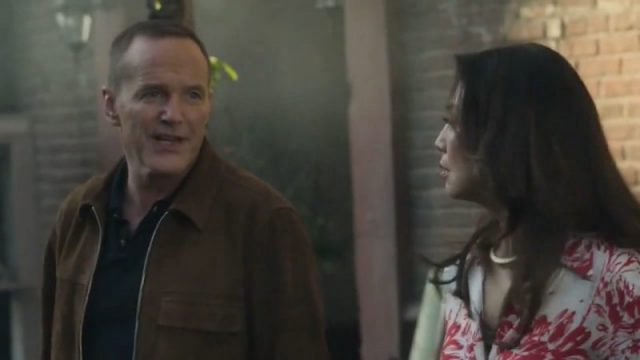 Fortunately, there’s nonetheless plenty to do in 1973, with Freddy Malick apparently having died in 1970, leaving Patrick Warburton’s Colonel Rick Stoner in charge of S.H.I.E.L.D. at this point in history. Remember him, from the Lighthouse video memos of Season Five? Warburton is definitely an episode highlight too, being a caricature of government professionalism with dubious allegiances, and a more light-hearted personality than his Marvel Comics inspiration. Inevitably, Stoner’s CIA history with X-Men champion, Wolverine is omitted from the MCU, but May appearing to flirt with Stoner as an HR rep, exchanging an over-the-top commitment to professional boundaries, is nonetheless very entertaining. I hope that this isn’t Warburton’s only in-the-flesh appearance as Stoner on Agents of S.H.I.E.L.D., since he seems to fit right in with this show’s winking sense of humour, particularly now that the 1970’s backdrop has given way to Space Race-inspired, over-the-top sci-fi conspiracies, after one backdrop of 1930’s Prohibition-inspired heisting, and another backdrop of 1950’s pulp-flavoured, Atomic Age spycraft.

Around half of this episode is thus spent with the present-day S.H.I.E.L.D. crew hanging around Ernest Koenig’s old bar looking for Enoch (who has mysteriously disappeared), where Stoner is hosting a work party for the 1970’s-era S.H.I.E.L.D. It’s here that the heroes learn of another standout twist that’s taken straight from the MCU’s movie catalogue as well– The Chronicoms have accelerated Project Insight, the deadly Helicarrier network of preemptive Hydra dissenter elimination from 2014’s Captain America: The Winter Soldier, now making it a network of laser-wielding satellites in the 1970’s! Not only that, but Freddy Malick is now still alive in 1973, having been saved from his unseen death that was supposed to happen in 1970, alongside his apparent other son, Nathaniel Malick. This huge alteration to history by the Chronicoms presents a big problem for the S.H.I.E.L.D. crew, especially when Freddy quickly recognizes them at the bar, forcing them to beat a hasty retreat, with some surprising help from Enoch. Nathaniel even catches a glimpse of Daisy’s Inhuman powers in the process, setting up another fantastic payoff for the end of this episode, right as the rest of the S.H.I.E.L.D. crew ends up in their own major spot of trouble! 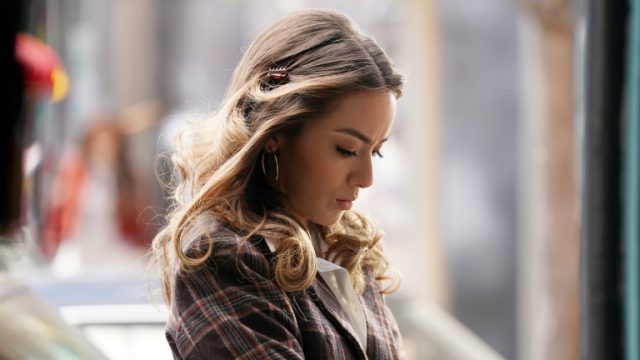 After just barely getting away from Freddy and the Chronicoms, the Zephyr then unexpectedly time jumps again to boot, specifically to 1976, completely eliminating the agents’ ability to stop Project Insight in its infancy! Mack then devises a plan to flood the Lighthouse, which he and Yo-Yo previously discover is no longer abandoned in 1973, while the rest of the agents are at the bar where Enoch is supposed to be. This initially presents an exciting device for this episode’s climax on its own, forcing Coulson and May to infiltrate the Lighthouse while S.H.I.E.L.D. and Hydra crews are very much active there, including Stoner, complete with ‘retro’ S.H.I.E.L.D. uniforms that cutely call back to Nick Fury’s early Marvel Comics costume. This is the only way that the agents can reliably stop Project Insight, before it launches several decades too early, since firing upon the satellites will give up the heroes’ position to a bunch of waiting Chronicoms. If you’re beginning to suspect around this point that something is very wrong with this mission, that’s because it very much is!

Despite some of this episode’s continued head-scratching time travel rules, the many sublime payoffs to events in 1973, and later 1976, make this week’s journey through time very much worth it! As it turns out, the Chronicoms set a trap for the S.H.I.E.L.D. agents on multiple fronts, predicting their actions through Sybil, and manipulating the heroes and villains alike, right from 1955! Thus, when Yo-Yo and Deke go to confront Freddy, who reveals that every step that the heroes made in the 1970’s was previously accounted for, Daisy and Sousa are captured by Nathaniel, while Mack is faced with having to drown his own parents, who are located by Project Insight, and imprisoned in the Lighthouse. This staggers the heroes on three equally dangerous fronts, forcing Mack to order Coulson and May to abort their mission, which results in them being cornered at the Lighthouse, while Mack in turn is forced to fire on the Project Insight satellite, revealing the Zephyr’s position to the Chronicoms and Hydra. Finally, Nathaniel, now being alive in 1973 and 1976, and witnessing Daisy’s Inhuman abilities at the bar, puts himself in contact with none other than Daniel Whitehall, as revealed in this episode’s epilogue! 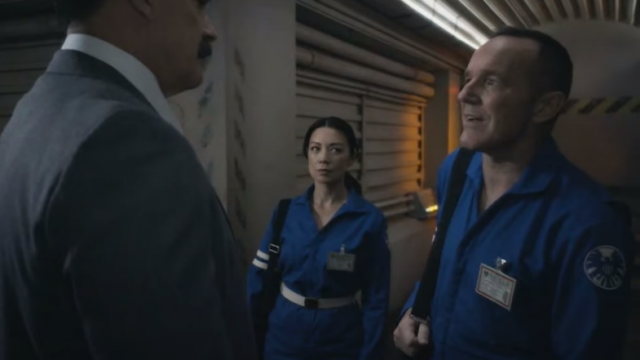 These unexpected twists wonderfully put the heroes on their back foot as this episode ends, and as the Chronicoms’ trap works like a charm. At least one small victory is had for the heroes however, when Deke shockingly shoots Freddy dead during their confrontation, despite Yo-Yo’s protests. If there’s one advantage to this show’s increasingly weird time travel/Chronicom rules, which are never adequately explained (sure, Enoch says that not even Chronicoms fully understand the time drive, but this feels like a cop-out), it’s that they’re starting to bring out a darker side to Deke, a character who shouldn’t exist at this point, but is nonetheless being bounced around at the mercy of time, and his friends. This provides yet another wild card in the storytelling that has Agents of S.H.I.E.L.D. firing on all cylinders this week, particularly after the heroes have had their own protocol and good natures turned against them by the Chronicoms.

“A Trout in the Milk” presents a slow burn storyline masquerading as a fast-paced intel-gathering operation, with the Chronicoms’ true endgame being expertly hidden from viewers’ expectations. Agents of S.H.I.E.L.D. continues to exceptionally make use of its period backdrops as well (complete with slickly changing this episode’s title card into a full 1970’s-esque extended theme sequence this week, which is very cool!), while at the same time appealingly tying in with the MCU’s movie arm, this time by leveraging one of the most pivotal moments in S.H.I.E.L.D.’s and Hydra’s modern history. The unexpected benefit to Project Insight potentially launching decades before it’s supposed to is that it could allow the MCU to re-insert S.H.I.E.L.D. back into future live-action Marvel movies or TV shows too, even after Agents of S.H.I.E.L.D. airs its series finale later this Summer. After all, if Project Insight is thwarted in 1976, instead of 2014, it’s entirely possible that Hydra may never be exposed within S.H.I.E.L.D., or, more likely, they may be exposed under different circumstances that could allow S.H.I.E.L.D. to endure in a revised timeline. Again though, this depends on Agents of S.H.I.E.L.D. ultimately deciding to put the MCU back on a singular timeline rule, which the series is still frustratingly non-committal about.

In fairness though, there’s still more than half of the show’s final season left to air, so we can see what happens. In any case, I remain thrilled to see that Agents of S.H.I.E.L.D. is never content to settle into a familiar, predictable groove, continuing to exceptionally pull the rug out from under audiences, right when it seems that the team’s objectives are clear.

Agents of S.H.I.E.L.D. 7.5: "A Trout in the Milk" Review
Agents of S.H.I.E.L.D. excels again with an especially unpredictable, thrilling mission through the 1970's this week, one that sees the hidden hand of the Chronicoms become even more treacherous.
THE GOOD STUFF
THE NOT-SO-GOOD STUFF
2020-06-25
94%Overall Score
Reader Rating: (0 Votes)
0%