Us Canadians unfortunately had to wait an extra week to get the third premiere episode for Doom Patrol’s sophomore season, but finally, “Pain Patrol” has aired on CTV Sci-Fi, and become available to stream via Crave, alongside this week’s properly planned Doom Patrol episode, “Sex Patrol.” The circumstances for why this episode was stalled in Canada for a week after the first two premiered in the Great White North on time are unclear, especially when the final three episodes of Doom Patrol’s first season all simultaneously dropped on Crave last year, in lieu of a CTV Sci-Fi airing, but regardless, “Pain Patrol” is another dramatic high point for this excellent tragicomic superhero series. It’s just a little more scattered than the two episodes that preceded it.

This is because, “Pain Patrol” tries to evenly spread itself across Doom Patrol’s entire lead ensemble, something that, admittedly, it still does a mostly good job at. Inevitably though, some character arcs are bound to get lost in the shuffle here, as the show once again puts the spotlight on certain characters over others, while continuing to leave Dorothy and her own plight in the background for now. While this ended up working pretty effectively last week, it does leave Dorothy with disappointingly little to do in this case, beyond being left alone at Doom Manor, motivating her to play hide-and-seek with her, “Friends.” In the process however, Dorothy accidentally breaks Danny’s brick, seemingly setting up the main conflict for the following episode, while creating a small tie-in to the theme that’s at the heart of this week’s first of two Doom Patrol offerings.

This theme comes in the form of pain, and how it can both define and break us. Considering that this episode is called, “Pain Patrol”, this should be hardly surprising. Once again though, certain Doom Patrol members find themselves up against another obscure, highly eccentric DC villain in this episode, with this latest threat coming in the form of Red Jack. Red Jack is a strange entity that portrays himself as ‘God’ in DC Comics lore, while also claiming to be Jack the Ripper (in this show’s case, Red Jack is indeed confirmed to be the Jack the Ripper of Earth-21 to boot!), and he happened to encounter Chief when he was just a boy in a Whitechapel alley. This explains why Red Jack saw fit to capture Larry, as a way of beckoning Chief back to his side.

Since the rest of the heroes are spread so thin in this episode however, only Rita is ultimately able to accompany Chief to Red Jack’s dimension, a realm of extreme pain and suffering, albeit with a vague air of sadomasochistic delight. Rita’s addition to this core plot also provides a great showcase of the bond shared between Rita and Larry, dating back to when Larry first came to Doom Manor in the 1960’s. As it turns out, Rita stood by Larry from the second he put on his radiation-blocking bandages and goggles. Even now, Rita braves extreme radiation exposure, and subsequent agony, to free Larry from his torment, while Chief in turn must reject eternal life, at the cost of becoming another entity of pain infliction. Chief then manages to stab and kill Red Jack in the end, before Rita manages to help Larry escape, while also freeing all of Red Jack’s other victims, who have since been forcibly transformed into pinned butterflies. 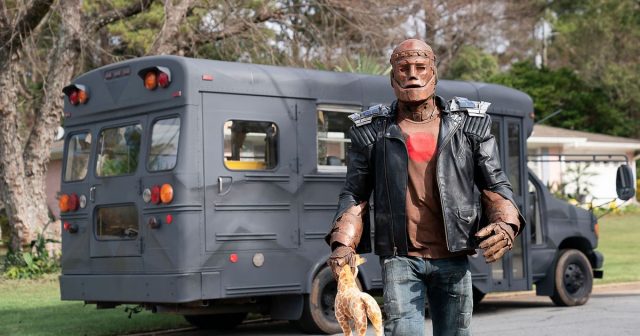 The Red Jack confrontation is definitely a big draw in this episode, with Rita, Larry and Chief all easily dominating the best character arcs in this case. Cliff and Jane also occupy a fairly solid pair of story arcs however, when they decide to take an impromptu trip to Florida, so that Cliff can properly reunite with his daughter. Jane ends up falling asleep during the long drive though, leaving Cliff to meet Clara alone, only for Clara to call the police on him, believing him to be a deranged impostor of her dead father. Cliff subsequently spends the entire night ranting and raving atop the Doom Patrol’s bus, while Jane is forced to face the scrutiny of her other personalities, who reveal that her true addiction isn’t Josh Clay’s serum, but instead constantly coming back to Chief. This is an interesting way to flip the script on Jane’s addiction this season, especially when Jane does manage to talk Cliff down from his rage in the end, only to then end up forcibly confined in the Underground during the final seconds of this episode, paving the way for a new primary to take her place!

As for Vic, he once again remains entirely disconnected from the Doom Patrol at this point, continuing his budding romance with Roni. The two even end up having sex this week, but despite Vic declaring that he really likes Roni, Roni appears to have no interest in an ongoing relationship. Even after Vic talks Roni into a date at a nearby diner as well, Roni stands him up, ultimately E-mailing him photos of past atrocities that she committed during her time as a soldier. Vic then leaves the diner at this point, possibly to return to Doom Manor, but we’ll have to see. While the little side plot with Vic and Roni has been decent, it is starting to feel more apparent that Vic is no longer meshing with the rest of this show’s ensemble quite as effectively. The theme of pain and being a lost cause still holds true for Vic here, but his romance with Roni feels like it’s being rushed through too quickly. Thus, I hope that this romance between Vic and Roni ends up finding a good way to tie into Doom Patrol’s main events later, especially when Roni has done such a strong job of challenging Vic’s established belief system.

“Pain Patrol” isn’t quite as elegantly executed as the thoroughly excellent first two episodes that kicked off Doom Patrol’s second season last week (at least, for us Canadians), but it’s still packed with some really great storytelling, even as it struggles to give the show’s entire ensemble the same degree of focus. Chief and Rita both working to save Larry from Red Jack serves as an easy episode highlight, though Cliff’s and Jane’s impulsive trip to Florida also manages to provide some pretty standout drama. Vic’s subplot with Roni is starting to falter a bit though, as is Dorothy continuing to be neglected at Doom Manor. Even so, the accidental breaking of the Danny brick should hopefully allow the show to focus back in on the (potentially) complete Doom Patrol ensemble in the following episode. Besides, after Danny’s fun appearances last season especially, I imagine that all of this episode’s pain and misery should hopefully make it extra satisfying to indulge in another awesome party with the Dannyzens!