Agents of S.H.I.E.L.D. seemed to have a bit of an awkward time concluding its 1970’s arc after last week, despite some initially interesting espionage on the part of the Chronicoms. Fortunately, the show has once again taken itself to a new time period this week, albeit without most of the heroes present in this case! “The Totally Excellent Adventures of Mack and The D” feels especially ambitious as the latest re-invention of Agents of S.H.I.E.L.D., centering the show’s latest plot around Mack and Deke in 1982/1983, with the Zephyr having jumped without them, leaving the two to pick up the pieces of their former battles, particularly after Mack’s parents ended up being killed by the Chronicoms.

This episode presents a surprisingly effective blend of emotions, despite its predictable embracing of over-the-top, neon-drenched 80’s pop culture. The early stretch of this episode is spent with Mack wallowing in a constant cycle of despair and self-pity, shutting himself off from the world completely, including Deke. This is likely the lowest that Mack has been throughout this show’s entire run, and even Deke is helpless to get through to him. Making matters worse for Mack is that Deke is probably the last person he would prefer to be stranded with as well, particularly when the two inevitably have a spat over what the Chronicoms have cost them, along with Deke’s inability to follow orders. 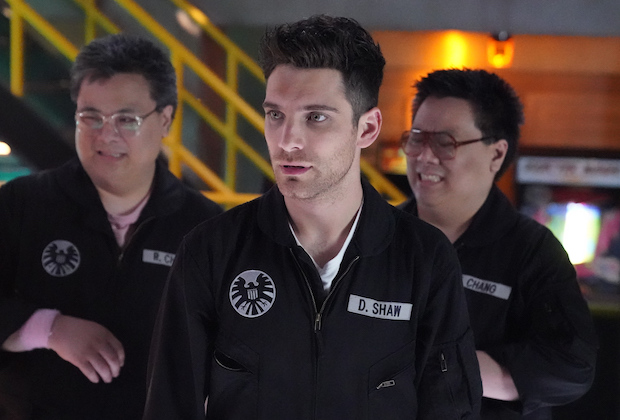 Speaking of Deke’s inability to follow orders, he’s officially disregarded preserving history in the 80’s, at least, at first glance. After forming a cover band that rips off various future 80’s rock and pop tunes, gaining Deke and his ragtag band a considerable following and merchandising deals, Deke eventually convinces Mack to see one of their shows at a nearby bar, before revealing that the band is a front through which to make a new S.H.I.E.L.D. operation. Mack even comes to see that Deke has fitted the Lighthouse with secret S.H.I.E.L.D. gear and a testing gauntlet, a move also signed off on by Coulson, who is now living as a digital construction within a hard drive, which was somehow recovered from the Chronicoms’ destruction at Coulson’s hands last week.

This surprise backup of Coulson goes both ways however, since Sibyl also survived the destruction of the Chronicom Hunters, after failing to predict Coulson’s grand act of self-destruction during the previous episode. Sibyl’s own return is both clever and genuinely hilarious as well, when she talks a stereotypical 80’s computer nerd into building her a new body, which not-so-coincidentally resembles the killer robot bodies from 1986 cult horror movie, Chopping Mall. The 80’s horror renaissance is one of many decade tropes referenced frequently in this episode, with surprisingly bloody and gruesome deaths at the hands of the new, retro-chic Chronicom designs, which eventually come to the Lighthouse, in order to try and wipe out what remains of S.H.I.E.L.D. in the era.

This creates a highly entertaining, effectively executed blend between the over-the-top action and horror movies that often defined the medium throughout the 80’s. The 80’s cliches even play out with Mack trying to walk away from Deke’s team, only to realize that he’s the only one who can set things right, thus resulting in a Rambo-esque montage and preparation effort, which eventually allows Deke and his band mates to take the fight back to the Chronicoms! The cheeky humour layered amid this otherwise serious situation works very well, and fits a lot better with the overall tone behind Agents of S.H.I.E.L.D., in contrast to last week’s rather clumsy finish to the 1970’s arc.

Ultimately, as much as it feels a little too convenient that Sibyl gets away, despite Mack sweeping the entire base for remains of the Chronicoms (seriously, how the hell did a very slow-moving RC Chronicom escape Mack’s surveillance?!), the story nonetheless reaches a satisfying conclusion. This episode does reveal early on that Mack and Deke are eventually found again, as May debriefs Deke about his latest changes to history, but even so, it was inevitable that Mack and Deke wouldn’t stay separated from their friends forever. What works as a more effective surprise is the fact that Sibyl has allied with none other than Nathaniel Malick, who has the time stream delivered to him by Sibyl’s robot aid, seemingly giving Nathaniel potentially unlimited access to future events! Nathaniel doesn’t appear to care much for Hydra’s agenda, granted, but even so, this can’t bode well for the days ahead! 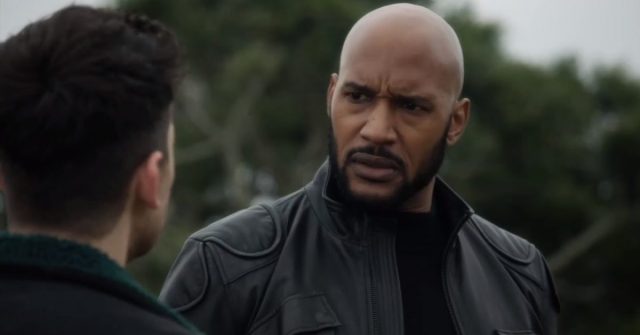 “The Totally Excellent Adventures of Mack and The D” is an excellent return to form for Agents of S.H.I.E.L.D., despite the show having to do some awkward narrative wiggling in order to force an excuse for the Chronicoms and Coulson to endure, after they logically should have been finished. Even so, the latest celebration of a historical backdrop’s cliches and pop culture works incredibly well this week, with Agents of S.H.I.E.L.D. fitting the brash, yet goofy style of the 80’s like a glove. Better still is that the grieving process for Mack, along with Deke having to face his bad behaviour while still saving the day, is given a surprisingly fun and clever spin, after the latest Chronicom ‘evolution’. It looks like the buck stops here for the time being, with Simmons seemingly indicating that S.H.I.E.L.D. has almost an entire month before the Zephyr jumps again, and I can’t say I’m complaining. Considering how well Agents of S.H.I.E.L.D. fits this era, I definitely wouldn’t mind if its eponymous heroes spent some extra time in the 80’s.

Agents of S.H.I.E.L.D. 7.7: "The Totally Excellent Adventures of Mack and The D" Review
Agents of S.H.I.E.L.D. returns to form with an excellent trip to the 1980's this week, one that provides a creative and clever way for Mack and Deke to face their issues and reconcile.
THE GOOD STUFF
THE NOT-SO-GOOD STUFF
2020-07-09
92%Overall Score
Reader Rating: (0 Votes)
0%