Agents of S.H.I.E.L.D. really soared with last week’s self-contained time loop conflict, giving us a sharply-directed reprieve from the ongoing battle against the Chronicoms and Nathaniel Malick. This week however, it’s back to business for the S.H.I.E.L.D. crew, after they return to 1983, and once again face off with Nathaniel and Kora, who have now recruited another deadly, and familiar ally to their ranks! Despite that exciting prospect however, it was inevitable that, “Stolen” would have a hard time following last week’s especially superb offering. Indeed, Agents of S.H.I.E.L.D. does appear to have hit a speed bump this week too, having to awkwardly hurry along several character arcs, so that it can set the stage for the imminently approaching series finale.

Now that the team is out of the time storm, they have to deal with Nathaniel having taken Afterlife. Thus, Mack has Jiaying and Gordon called back to the Lighthouse, where they try to formulate a plan to determine who is currently being held by Nathaniel’s forces. After having to talk Jiaying down, Coulson ultimately infiltrates Afterlife with Gordon as well, only to walk straight into a trap. This is because Coulson is predictably unaware that Nathaniel has grabbed the time stream from Sibyl, allowing him to foresee all of Coulson’s moves before they happen. Not only that, but this episode even begins with Nathaniel recruiting a sneering face from Coulson’s past; A younger, extra sinister John Garrett! 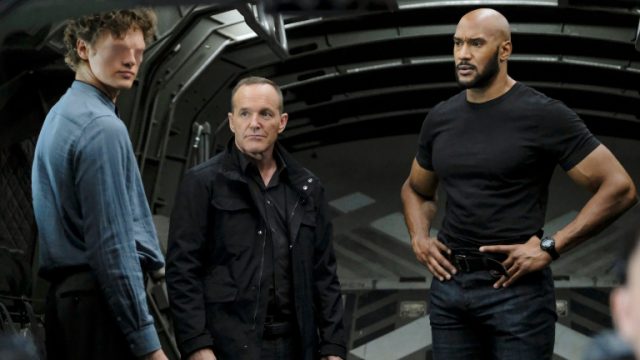 A younger Garrett incarnation nicely gets around the passing of Bill Paxton in 2017 (especially when the younger Garrett is played by Paxton’s real-life son, James Paxton), while still finding a cool way to call back to Agents of S.H.I.E.L.D.’s very first season, and its very first arch-villain. Nathaniel’s time stream even shows Garrett his 1990-era betrayal by S.H.I.E.L.D., the one that turns him to Hydra, several years early, priming the younger Garrett to happily receive some new Inhuman powers, once Gordon is forcibly hooked up to Nathaniel’s power transfer machine. Naturally, in the years since Nathaniel messily stole Daisy’s Inhuman powers for himself, he’s improved his power-stealing process, even transferring Li’s blade powers to another of his underlings, before Kora kills Li on Nathaniel’s orders.

The hook of bringing Garrett into Nathaniel’s ranks is a pretty great one, especially now that Garrett is souped up with Gordon’s teleportation powers, without even having to sacrifice his eyesight in the process! This new/old enemy addition creates a fairly exciting premise for the trip into the occupied Afterlife as well, but also one that doesn’t totally land with all of the thrills that it could have. It’s entirely possible that I’ve just been spoiled by last week’s especially clever time loop conflict, but something about the Afterlife mission felt like it lacked the same appeal this week. Then again, a big part of the problem is that Kora, another promising new threat, feels pushed too far into the background here, spending most of this episode posturing, and eventually getting shot by an icer, courtesy of Coulson. Considering how much Kora has been built up as an enemy to S.H.I.E.L.D. and to Daisy, it was disappointing to see her do practically nothing outside of killing Li this week, a character that doesn’t really matter all that much.

Oh, and speaking of killing characters, this was another frequent frustration in this episode. I get that Agents of S.H.I.E.L.D. is rapidly approaching its overall conclusion in August, but the show is still shrugging at the exact nature of the Marvel Cinematic Universe’s time travel rules. Agents of S.H.I.E.L.D. already seemingly contradicted the already shaky ones established in last year’s Avengers: Endgame, right from its fifth season that preceded that movie by a whole year, before killing Mack’s parents, and continuing to suggest that this has no effect on the former future of the S.H.I.E.L.D. crew. This question is once again put into sharp focus when Daisy has a rather nice moment with Jiaying as well, an easy episode highlight. Here, Daisy confesses to an oblivious Jiaying that her mother wasn’t what she’d hoped so many years ago, only for Nathaniel to eventually blurt the truth about Daisy out to Jiaying during a brief confrontation that soon follows, shortly before Jiaying is killed again. Well, so much for that interesting twist. Perhaps Agents of S.H.I.E.L.D. is just running out of episodes, and having to hurry its storytelling along at this rate, but Jiaying ultimately served as little more than an annoying red herring, before the true agenda of Nathaniel is ultimately revealed.

Apparently, Nathaniel wasn’t after Jiaying’s healing powers, which, again, seem to stop working when her spine is snapped, despite even this very episode making reference to Jiaying literally being cut to pieces by Hydra in the future, yet somehow surviving that. Jiaying’s abilities just don’t make a ton of sense when it comes down to it. Anyway, it turns out that Garrett invading the Lighthouse with Gordon’s powers was actually done so that he could grab Simmons, not Jiaying. Apparently, in every potential timeline wherein Nathaniel and Garrett fail in their plot, the key factor is always Fitz. This is at least a good setup for next week, one that finally promises to resolve the mystery of just where the hell Fitz has been all season. Deke accidentally stows away on the Zephyr after Nathaniel and Garrett hijack it as well, forcing S.H.I.E.L.D.’s least reliable agent to once again be the hero, while also perfectly priming him to discover the same horrible truth as his future grandmother. 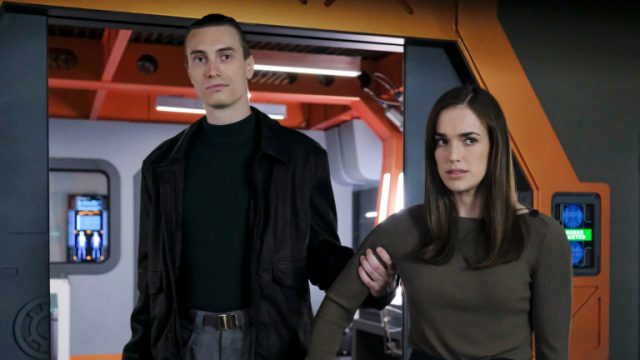 “Stolen” ultimately feels like a filler episode for Agents of S.H.I.E.L.D., one that was bound to struggle in the wake of the show’s final season reaching a high note last week. The return of a younger John Garrett is at least cool, as is the hook of giving him Gordon’s Inhuman powers, while Simmons being the true objective of Nathaniel also makes for a nicely unexpected turn. Despite that however, the show felt like it took too much focus away from Kora here, while making the events at Afterlife and the Lighthouse play out as little more than quick, dirty story setup. I guess it is tough to get around the fact that Nathaniel has the endless advantage of Sibyl’s time streams on his side, but that doesn’t really lead to an organic or smart way to set up a final battle against an ultimate villain, at least not yet, especially when so many bodies are continuing to drop, while still supposedly not affecting the future of the heroes. At least the show is in a good position to start executing the first phase of its overall climax next week though, especially now that it’s finally promising some definitive answers as to what’s happened to Fitz.