NOTE: Full spoilers for this episode of, “Stargirl”, including multiple major character deaths, are present in this review

Project New America has been activated. As a result, almost every adult in the United States has been left paralyzed, forced to receive Brainwave’s altered social programming, or die trying to resist it. This creates some nicely high stakes for the second half of Stargirl’s two-part season finale storyline, following up last week’s somewhat shaky first half with an overall superior conclusion, albeit one that still has a few issues. Still, “Stars & S.T.R.I.P.E. Part Two” does at least provide plenty of action-packed excitement to close out Stargirl’s first season on, along with its short-lived run on the DC Universe streaming platform, before the series moves fully to The CW next year.

Last week’s cliffhanger conclusion saw Courtney having to fend off a hypnotized Pat, while Beth failed to get through to Barbara, and Rick and Yolanda similarly find themselves unable to rely on Justin. Fortunately, Charles has a plan to snap some of the adults out of their stupor, even as the clock ticks down on Brainwave’s programming being permanent for most of Earth-2’s American adults. This stinks a bit of the show writing itself into a corner, frankly, especially after the already illogical limitation of the ISA’s mind-altering device somehow not affecting teenagers, despite most of the new JSA being teenagers. Regardless, Pat somehow manages to hold back Brainwave’s programming long enough for Charles to out-hack Gambler, allowing a momentary disturbance in Brainwave’s signal just long enough to bring Pat and Justin back to lucidity, but not Barbara.

From here, the race is on to stop Brainwave’s machine, and halt the ISA’s plot in its tracks. Again, this might as well have been an ordinary comic book-style mind control plot too, without the head-scratching, left-leaning agenda that the ISA was inexplicably revealed to have last week, since the villains are all of a sudden back to being cackling, remorseless killers this week. At the very least though, we do get a pretty exciting confrontation in Dragon King’s chamber, with the assembled JSA battling against most of the ISA’s thugs, including Sportsmaster, Tigress, Dragon King, and Icicle. Cindy is also let out amid the chaos, ultimately robbing Justin of killing Dragon King, as she stabs her father to death herself. Boy, considering how much Dragon King has been built up as a threat all season, he really went down like a chump, didn’t he?

Sportsmaster and Tigress also appear to be ultimately incapacitated during the battle (they don’t appear to have been killed), while Icicle instead flees to deal with Beth. The busy battle is further bolstered for Rick at this point as well, when Solomon Grundy is let out to attack him! Yolanda, meanwhile, gets arguably the best confrontation of this episode, taking out a series of Dragon King’s mindless peons, before one reveals himself as… Henry?! Yes, despite being evidently killed several episodes ago, Henry appears to have survived his rather blatant death… And yes, this is too good to be true. In what’s admittedly a pretty awesome twist, a slip-up by, “Henry” reveals him to be a disguised Brainwave, whom Yolanda brutally slits the throat of, before watching him bleed out on the ground. Damn, Yolanda… As much as Brainwave’s death is a handy way to stop the ISA’s plot, one has to wonder if Yolanda’s sudden breaking from her religious family’s ideals will have an adverse effect on her character next season, especially when she’s already had to take a life before this season is even up! 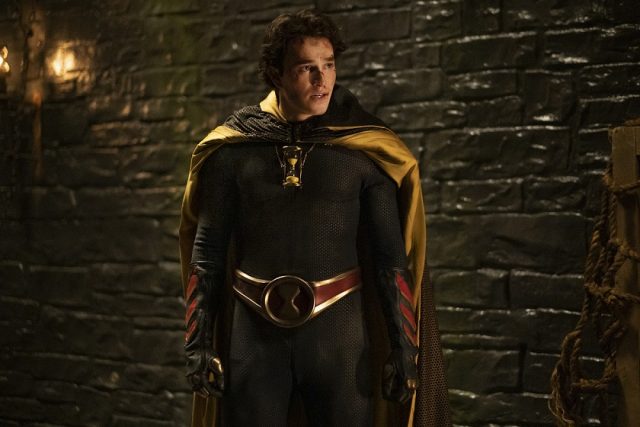 With the ISA’s plan foiled, and having no other options, Jordan/Icicle next decides to freeze Beth’s goggles, essentially, “Killing” Charles, before he snatches Barbara, and brings her to the roof. At this point, Pat, whose S.T.R.I.P.E. rig was previously ripped apart by Solomon Grundy, goes to confront Jordan himself, only for Courtney to intervene. Thus, there’s one more exciting scrap on the roof of the Project New America headquarters here, before Courtney and Jordan both find themselves on the ground, and Jordan is subsequently shattered and killed by Mike, driving Pat’s truck. Okay, while that’s a humiliating end for Jordan, it is nonetheless very cool to see Mike striking the fatal blow to the ISA’s leader, after being forcibly neglected as a character throughout this season. Again, everyone seems weirdly fine with Mike outright killing a villain at such a young age, albeit righteously, but perhaps this is another thing that will be adequately addressed next season.

Not every major confrontation was ultimately satisfying in this season finale, especially with Rick predictably failing to strike a killing blow against Solomon Grundy, who is thus left to flee (presumably alongside Gambler, Sportsmaster and Tigress), but Stargirl at least managed to deliver an eventful, appropriately epic conclusion to its first season, despite this storyline’s shaky first half last week. That being said, this proper season finale for Stargirl also trudges through a few too many epilogues, to the point where one could weirdly draw comparisons with WarnerMedia’s own perennial epilogue satire, The Lord of the Rings: Return of the King. Among these epilogues, Justin goes to seek out the rest of the Seven Soldiers of Victory, Courtney and Pat have a nice fly around a snowy Blue Valley at Christmas, Cindy digs up the Eclipso gem (teasing a major new DC villain for next season!), the missing ISA member, Shade returns to the ISA headquarters (teasing another major new DC villain for next season!), and, most shockingly of all, Sylvester Pemberton, Starman himself, shows up at Pat’s old apartment, alive and well! Boy, that’s a lot of teases for next season! Geez!

I suppose you can’t fault Stargirl for maintaining such an enthusiastic sense of momentum however, even after the show is abandoning DC Universe from here, not to mention that the bulk of the ISA has now been killed, and Project New America has naturally been stopped. Enough ISA members survived to fight again next season, thankfully, likely under new leader, Shade, and it’s also going to be good to look forward to Cindy wielding the ultra-powerful Eclipso gem, giving her a particularly deadly edge as Courtney’s budding arch-nemesis! Overall, “Stars & S.T.R.I.P.E. Part Two” didn’t completely fix some of the disappointing writing from last week, but it at least did a good job of distracting from the head-scratching story elements throughout the ISA’s endgame, namely with tons of action and an appropriately huge scope. I really hope that the full-time move to The CW doesn’t compromise Stargirl in the end, because even though it’s hardly perfect, this series remains a cut above most of the The CW’s current programming crop, hopefully setting Stargirl up as a strong Summer series for the Arrowverse’s off-season.

Stargirl 1.13: "Stars & S.T.R.I.P.E. Part Two" Review
Stargirl ratchets up the action for an epic, exciting conclusion to its debut season this week, as the JSA and ISA violently clash for the fate of Earth-2's United States.
THE GOOD STUFF
THE NOT-SO-GOOD STUFF
2020-08-11
82%Overall Score
Reader Rating: (0 Votes)
0%