NOTE: Some spoilers from throughout the second season of, “Doom Patrol” are present in this review

Despite the big push behind flagship series, Titans to be the major headliner for the DC Universe streaming platform’s slate of original series content, it was Titans’ originally billed spin-off, Doom Patrol that ultimately became the big live-action standout for the DC streamer. Doom Patrol is no longer a Titans spin-off either, instead being moved away from Titans’ Earth-9 universe to instead inhabit the live-action DC Multiverse’s Earth-21, and perhaps that’s ideal. After all, Doom Patrol represents such a bold creative departure from the more recognizable superhero drama sensibilities of Titans that it truly has taken on a life of its own. That distinct life was best exemplified across an overall superb debut season last year, finally providing the first legitimately fantastic original series for the DC Universe catalogue, if one doesn’t count the resurrected Young Justice animated series.

Doom Patrol became such a hit in fact that it even ended up serving as the first DC Universe series to begin making its way to fledgling WarnerMedia streaming platform, HBO Max in the U.S., where the show’s second season was co-hosted with DC Universe. This ultimately kicked off a wholesale migration of every DC Universe original series now permanently migrating to HBO Max for Americans (except for Stargirl, which instead moved to The CW), thus serving as the latest sign that the DC Universe streaming platform is likely on death’s door, at least in its current form. Not helping DC Universe’s predicament either is the fact that Doom Patrol’s second season was one of many television seasons to be adversely affected by the ongoing COVID-19 pandemic, resulting in production complications that led to its episode count being forcibly shortened to just nine episodes.

Despite being slightly compromised by a global pandemic however, Doom Patrol’s second season still represents tragicomic superhero television at its best. The abruptly-shortened episode count does unfortunately lead to an awkward, unsatisfying season finale cliffhanger (one that’s uncomfortably reminiscent of Titans’ baffling Season One cliffhanger), but outside of that, Doom Patrol’s second season keeps effectively evolving the show’s storytelling, bringing in new threats, new trauma, and new emotional depth probed from its downtrodden superhero leads. This all builds from the earth-shattering revelation that Mr. Nobody delivered late in the first season as well, namely that Doom Patrol leader, Niles Caulder/The Chief intentionally manipulated the Doom Patrol members’ ‘accidents’, in turn giving them their volatile powers, their apparent immortality, and their clear inability to ever properly interact with regular society.

Season Two thus begins with each Doom Patrol member responding to this hard truth in a variety of ways. Cliff has become consumed with anger, Jane has chosen to numb her sorrows with drugs, Larry has become extra withdrawn and introspective, and Rita, surprisingly, has found clarity and positivity in Chief’s honesty, choosing to use the true nature of her origin as a way to try and achieve something better. Season Two’s events naturally begin with most of the Doom Patrol, except for Larry, shrunken down to the size of cockroaches as well, following Season One’s shock ending, and subsequently being forced to live within Cliff’s miniature town, while they wait for Larry to help formulate a solution. As you do. This is only the beginning of the crazy obstacles that the Doom Patrol face in Season Two as well, which range from a sex-hungry demon, a pain-obsessed harlequin, stupidity-generating micro-organisms, and, craziest of all, an apocalyptic, candelabra-esque monstrosity known only as, “The Candlemaker.”

The Candlemaker represents the biggest ‘complication’ in Doom Patrol’s second season, particularly due to it manifesting within Chief’s formerly hidden daughter, Dorothy Spinner. An ageless tween girl with ape-like features and a perpetually sunny attitude, along with the ability to bring her, “Imaginary friends” to life, Dorothy is initially met with apprehension and rejection by the other Doom Patrol members, but eventually comes to find her place in her new ‘family’. All the while however, Chief is warned of Dorothy’s world-destroying capabilities by Willoughby Kipling, a returning guest character from last season, who robs Chief of his immortality early in Season Two, presenting another ticking clock to go with the ever-encroaching menace of the Candlemaker. Despite Mr. Nobody being banished to the White Space, and thus being absent throughout this season, the Doom Patrol certainly aren’t wanting for villains as dangerous as they are ridiculous, even if several story developments had to be chopped out in hopes of being revisited during a potential third season.

As much as the kooky battles with various enemies continue to provide strong entertainment value throughout Season Two of Doom Patrol however, it’s once again the heart and trauma behind the main characters that continue to fuel most of the series’ appeal. Even after finally finding Chief again, the lead anti-heroes are now faced with building renewed purpose, after learning that they’re failed experiments. This leads them in a variety of interesting directions, particularly in regard to revisiting their old family lives. This can be good, such as Cliff finding a means to reunite with his daughter, or it can be bad, such as Rita discovering that she only got her foot in the door as an actress because her mother was prostituting herself to Hollywood executives. As usual, Doom Patrol sublimely balances its humour with its pathos in Season Two, often making you laugh and stare in disbelief at the inconceivably weird world that it unfolds in, while at the same time tugging at your heartstrings with a starkly human examination of characters who have practically ceased to be recognizably human in their current forms.

Doom Patrol’s second season also makes the decision to spend more time spotlighting the lead characters individually as well, which can sometimes work to mixed success. On the one hand, the individual character storylines create tighter, more focused drama in many instances, often allowing certain characters to explore rich backstories and interesting emotional obstacles, while the rest of the characters can focus on entertaining more delightfully insane challenges like the ‘terrible’ Dr. Tyme, or a party crashing by the remarkably hilarious SeX-Men. When this new storytelling approach doesn’t work however, it can cause the narrative focus to be spread too thin. This can result in disappointingly disposable subplots that strain to keep secondary character arcs relevant and interesting in contrast to the main plotline, an issue that particularly affects Vic this season. This is because Vic’s arc has him tied up with a new love interest, Roni Evers (a gender-swapped variation of DC Comics’ Cyborg frenemy, Ronald Evers), a former soldier for the Quorum, an organization of villains that aspire to design metahuman-esque super-soldiers. That’s well and good, except that the initial romance and eventual threat created by Roni is one of the obvious casualties of Season Two’s forcible shortening, with the entire resolution of Roni as a foil to Vic having to be cut out of the season in the end.

Fortunately, new personality, Dorothy Spinner, by contrast, proves to be a season highlight. Portrayed wonderfully by relative newcomer, Abigail Shapiro (who, funny enough, also portrays the child version of Chief in a flashback at one point), Dorothy provides some very welcome optimism to the otherwise bleak kick-off of Season Two, and only grows further on you from there. Dorothy also allows Chief to find a worthwhile new place in Doom Patrol’s overall storytelling to boot, re-purposing him from a mere plot device to a tragic, ever-burdened father figure, whose mounting failures further exacerbate his rapidly-approaching death. This leaves Chief struggling to give Dorothy the best final days with her father that he can, while also struggling to keep the Candlemaker within her at bay, despite Willoughby consistently reminding Chief of what must eventually be done. It’s through this challenging balance that Dorothy helps to restore humanity in a man that ended last season as the biggest monster among the Doom Patrol, having irreversibly ruined the lives of several people who were already suffering from many levels of dysfunction and trauma. 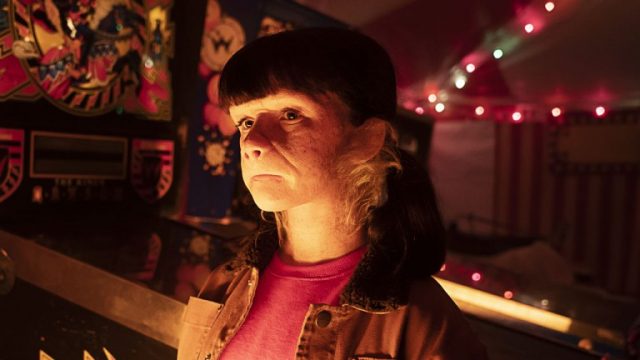 Indeed, that trauma also keeps coming back to haunt the various Doom Patrol members in Season Two, as they try to recapture some semblance of ‘normal’. For Vic, that involves his aforementioned romance with Roni, but for the longstanding Doom Patrol members, this involves facing the families they left behind. Jane in particular takes a huge turn in Season Two, when Kay Challis’ former ‘primary’, Miranda suddenly returns, after the Underground ends up being irrevocably affected by the Candlemaker. This is yet another storyline that doesn’t ultimately get resolved this season, due to the forcibly shortened episode count, and that’s frustrating, since the Underground mystery is another highlight storyline throughout Season Two. Another especially big development that comes from facing a family that’s no longer present arrives via Rita as well, who eventually tries to join Cloverton’s local theater group, only to instead find the drive to become a D-list superhero known as, “The Beekeeper.” This is a fun angle for Rita that suffers noticeably less from Season Two’s reduced episode count, as does Larry’s fully fleshed-out and failed efforts to re-connect with his own family, after his negative spirit reveals that one of Larry’s sons committed suicide.

Doom Patrol could have easily suffered from a sense of diminishing novelty in Season Two, but surprisingly, the series completely avoids that. Instead, Doom Patrol keeps cleverly upping the scope of its humour, its characterization, and both the eccentricity and menace behind its villains throughout its sophomore season. Despite losing several planned episodes to the COVID-19 pandemic, the season’s storytelling is only minimally affected as well, with the only blatantly noticeable issue being its awkward conclusion that fails to resolve most of the shortened season’s ongoing story arcs. Still, you can hardly blame Doom Patrol for an act of God that’s clearly beyond its control. A more valid issue would be how thinly the character writing can sometimes be spread, due to Season Two’s heightened focus on juggling many individual character-driven storylines, only for most of those storylines to be left hanging. Even then though, Doom Patrol remains one of the best superhero shows on television at this point, from DC or otherwise, continuing to stand as a crown jewel in DC Universe’s original series catalogue, and now WarnerMedia’s Max Original catalogue (and, for us Canadians, our Crave series catalogue!).

Stay weird, Doom Patrol. I hope it won’t be long before we finally get news on your return!