NOTE: Some spoilers from the second season of, “Titans” are present in this review. That said, the review is written to accommodate those who haven’t yet watched the season, and as such, will avoid discussion of major story developments.

Even as Titans prepares to migrate to HBO Max in the U.S., alongside the other original shows made for the seemingly short-lived DC Universe streaming platform, Canadians and other international viewers continue to get a raw deal with the series’ distribution. Like the first season, Titans’ second season is exclusive to Netflix here in Canada, where its entire 13-episode run was thanklessly dumped at the start of this year, considerably later than when Titans’ sophomore season wrapped its weekly DC Universe run in the U.S. I already went over how irritating this international distribution model for Titans is within my review of the show’s first season, though I suppose that since Titans’ sophomore season is technically a 2020 release for Canada (yes, it was that late), it’s at least somewhat timely to finally talk about it in a year that’s forced many of us to dive deep into our streaming backlogs, due to the ongoing COVID-19 pandemic consistently shutting the majority of us in our homes.

Titans’ second season also represents something of a reinvention for the series, after its otherwise solid first season drew criticism for its tonally confused, unfocused writing. Now that the lead characters are fully established however, and now that Titans has had time to refine its vision, the show’s second season is allowed to focus more on developing a cohesive world for the lead ensemble, which more or less doubles in size during Season Two. Formerly recurring characters such as Hank Hall/Hawk, Dawn Granger/Dove, Jason Todd/Robin II, and Donna Troy/Wonder Girl are bumped up to main roles in Season Two, now standing alongside the returning core Titans ensemble, Dick Grayson/Robin I, Kory Anders/Starfire, Rachel Roth/Raven, and Garfield “Gar” Logan/Beast Boy. Some all-new additions also join Titans’ reluctant lead heroes in Season Two to boot, including Chelsea Zhang’s Rose Wilson/Ravager, a physically-enhanced runaway fleeing her murderous father, and Conner Kent/Superboy, who, alongside his Kryptonian-powered dog companion, Krypto, was teased during Season One’s post-credits scene, when he breaks out of confinement in a LexCorp testing facility based in Metropolis. 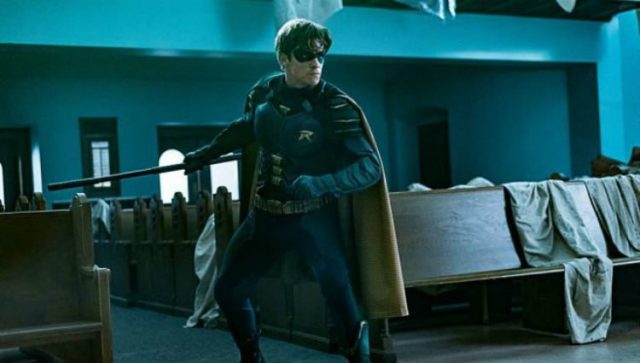 After having to spend its season premiere wrapping up the awkwardly truncated Trigon threat from Season One (thankfully, Season Two doesn’t inexplicably chop out its planned season finale this time), Season Two also jumps ahead to a new setting in San Francisco, wherein Dick decides to re-open an old heroic base of his, Titans Tower. This is so he can train Jason, Rachel and Gar to achieve their true potential as heroes, with the blessing of Bruce Wayne. Oh yeah, Bruce Wayne actually shows up in the flesh during Titans’ sophomore season, where he’s played by Game of Thrones’ Iain Glen. You don’t actually see Glen’s Bruce don the Bat Suit, of course, but he nonetheless lingers as a shadowy ally to the Titans, as well as an over-the-top manifestation of Dick’s guilt and occasional self-pity, after certain events that occur in Season Two. In fact, some of the best and most memorable scenes in Titans’ second season involve Dick’s mental representation of Bruce mocking him and jeering at him like a schoolyard bully, which is not only weirdly hilarious, but also cleverly represents how Dick perceives Bruce, namely as a disapproving, derisive stepfather figure that’s constantly urging him to ‘man up’.

Thankfully, Bruce is nonetheless used sparingly, and that’s good. After all, Dick is still very much the central character behind Titans’ second season. That’s more true than ever now in fact, since the threat of Rachel’s father is neutralized from the start of the season, leaving Rachel to take on more of a supporting role this time, rather than being a co-lead doubling as a main plot device. Rachel, Gar and Jason also stand as innocents in the battle against Season Two’s new arch-villain, Slade Wilson, a.k.a. super-powered mercenary, Deathstroke. Deathstroke, portrayed by Esai Morales in Titans, has become one of the most high-profile DC villains overall in recent years, even becoming a major enemy to Batman, Green Arrow and the Justice League at large in more recent DC media. In this instance however, the character is somewhat going back to his roots for Titans’ second season, where he originated as the arch-nemesis of the Teen Titans during their earliest years in DC Comics history. In fact, on Earth-9, Titans’ home universe in the current live-action DC Multiverse, Deathstroke appears to have no connection to any other DC superhero, and has solely made an enemy of Dick’s former band of Titans.

The introduction of Deathstroke, and Rose being revealed early on as his daughter, quickly hammers home the central theme of family, and what makes a truly healthy family unit, a theme that’s present all throughout Titans’ second season. Fortunately, this is a smart theme that allows Season Two of Titans to become more focused and consistent in its direction, compared to its predecessor. Dick most notably is now being placed in the same position that Batman once held for him, having to train a powerful and unstable new generation of heroes, while Hank, Dawn, Donna and Kory make their own efforts to move on to new lives, only to inevitably be pulled back into the orbit of Dick’s mission, and the battle against Deathstroke. There are also echoes of trying to confront the past in Titans’ second season, naturally, and that particularly develops through Kory’s character, who mostly serves as the eventual foundation for Titans’ in-development third season.

As much as Season Two of Titans is an improvement over its predecessor however, it’s still not perfect by any stretch. In trading grungy, edgelord-skewing rhetoric for more emotionally-charged family and friendship drama, Titans does get a little more soapy in Season Two, which doesn’t always work to its benefit. Granted, the show is no longer trying too hard to be seen as cool and edgy in Season Two, which is good, but it does sometimes skew dangerously close to CW writing through its re-tooled direction. I suppose that shouldn’t be a huge shock, since The CW’s most prolific drama producer and DC series godfather, Greg Berlanti is an executive producer and lead developer on Titans, but frankly, Titans doesn’t have any more business being a soapy melodrama than it does being ultra-violent emo porn. Sure, Season Two nails down a much more consistent, cohesive tone and presentation, but it still has some room to improve on those notes. There’s still too many instances of forced drama in certain episodes, especially in regards to, “Keeping secrets” (which has become a laughable cliche for both Berlanti and modern DC media at large by this point), and for a show that retains an R-rated style that caters specifically to adults, on top of starring mostly adult leads, Titans sometimes forgets that it’s no longer supposed to be ‘Teen Titans‘.

Fortunately, where the heroes and their inane squabbling sometimes drag the season down, Morales’ Deathstroke consistently and effortlessly picks up the slack. While he’s not as outright terrifying as Manu Bennett’s standout live-action Deathstroke from The CW’s Arrow, the original Berlanti-produced DC series, Morales’ Deathstroke nicely stands apart with an almost sympathetic dignity. This Deathstroke still has a functioning family that he left behind, for starters, along with a history of trauma derived from his experiences and superhuman enhancements gained from the U.S. military. Morales’ Deathstroke is methodical, soft-spoken, and ruthlessly efficient in both his mercenary career and family ideals. This certainly marks a very different Deathstroke than you may initially expect, but he fits perfectly in the world of Titans, serving as an ideological obstacle for Dick and his allies as much as he does a physical one. Moreover, Deathstroke also retains his overwhelming tactical intelligence and manipulative brilliance in the Titans universe, almost making him more like an anti-Batman to Dick than just another metahuman thug, as he crafts an intricate web of deceit, gaslighting and mental torture that constantly threatens to tear apart Dick’s ‘family’ of heroes from the inside.

Titans’ writing hiccups still frustratingly hold it back from standing alongside DC Universe crown jewels like Doom Patrol and Young Justice: Outsiders, but the show does manage to deliver an improved, more consistent second season. Titans doesn’t sacrifice its sometimes shocking violence and hard R-rated tone in Season Two either, even if it still struggles to balance that with more soapy family drama this time out. Fortunately, a much more compelling arch-villain and some inspired additions to the cast help to tie together Titans’ narrative in Season Two, bringing the show much closer to perfecting its overall vision. Titans may still have some room to grow during the upcoming Season Three, but its upward trajectory is assuring, especially now that the show is being forced to migrate to the significantly more crowded Max Originals catalogue for future seasons, at least in the U.S. Here in Canada, among other international territories, we’ll no doubt have to wait even longer for Titans’ next season to finally arrive on Netflix in 2021, after its production was indefinitely stalled due to the ongoing COVID-19 pandemic.

If Titans can properly leverage that extra time in the cooker however, perhaps Season Three can finally allow the series to realize its full potential. Either way, I hope it’s worth the wait, because us Canadians will probably be waiting a while for it.

Titans: Season Two Review
Titans refines its vision and tightens its focus throughout its overall improved second season, though some contrived drama and uneven character writing still hold the series back from its full potential.
THE GOOD STUFF
THE NOT-SO-GOOD STUFF
2020-08-20
82%Overall Score
Reader Rating: (0 Votes)
0%