Have you ever wanted to turn your home into an elaborate, real world Mario Kart track? If so you’ll soon be in luck.

During today’s Mario-themed Nintendo Direct, the big N announced an interesting new racing game called Mario Kart Live: Home Circuit. The subtitle is crucial here, because it accurately describes the experience, which involves turning your own home or immediate surroundings into a track and racing through it through augmented reality means. It will involve the use of player-driven RC cars, and looks like good, wholesome fun.

The physical kart responds to boosts in-game and in the real world, stops when hit with an item and can be affected in different ways depending on the race. Players place gates to create a custom course layout in their home, where the only limit is their imagination. Race against Koopalings in Grand Prix, unlock a variety of course customizations and costumes for Mario or Luigi, and play with up to four players in local multiplayer mode.

If only this had been released earlier in the pandemic. 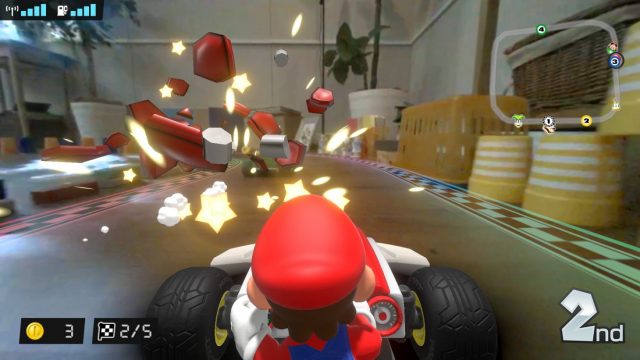 Mario Kart Live: Home Circuit is expected to release on the sixteenth of October, and will come in two varieties (Mario or Luigi). Each one will set you back $99.99 in American dollars. It will also require a Switch.