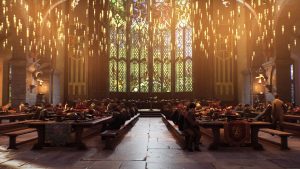 Hogwarts Legacy will function as an open-world action-RPG, one naturally set within the world of Hogwarts. Players will participate in various Hogwarts activities, such as wizarding classes, Sorting Hat rituals and trips to Hogsmeade, along with battling familiar Harry Potter franchise foes such as Dementors, and what appear to be possible forerunners to Death Eaters. Most interesting of all is that the game apparently takes place in the late 1800’s to boot, making it a prequel to even the Wizarding World’s Fantastic Beasts movie franchise in the universe’s canon, along with distancing it from the events of the Harry Potter saga by around a century.

Rumours about Hogwarts Legacy have been swirling in some form since 2018, long before the game would even receive a title. Many of the game’s early leaks appear to have been accurate as well, according to the footage shown at the PlayStation 5 showcase today, including Hogwarts Legacy being an open-world RPG that’s set within the Wizarding World universe, albeit one that doesn’t bear any direction connection to the Harry Potter storyline. After initially being announced for PlayStation 5, we can now also confirm, via a press release from Warner Bros. Games, that Hogwarts Legacy will also be releasing for PlayStation 4, Xbox Series X, Xbox One, and PC.

All versions of the game are expected to launch at some point in 2021. It’s currently unknown whether the PlayStation 4 and Xbox One versions will offer a free upgrade path to their next-gen variations on PlayStation 5 and Xbox Series X.