Fear the Walking Dead hit a fantastic high note last week, while focusing in on fan-favourite character, John Dorie. Once again though, the show switches perspectives with the following week’s episode, this time going back to a set of characters that already got the lead perspective a couple of weeks ago. “Honey” picks up around Dwight in particular, after his emotional reunion with Sherry two episodes ago. Dwight finding his wife again comes with the added consequence of trapping him within another all-new community of survivors though, a community that Sherry has been a part of for several months now. This community also happens to have a major beef with Virginia, and are ready to strike at her, possibly ending the battle against Virginia’s Pioneers early in the season!

Ha! Just kidding. Obviously, there’s no chance that this new community is going to be successful in their plans, and this serves as one of the main frustrations behind, “Honey.” Naturally, Fear the Walking Dead wasn’t able to maintain its incredible momentum from last week, delivering a lesser episode that nonetheless manages some standout drama between Dwight and Sherry. Everything beyond these star-crossed lovers however feels like it comes up short this week, even when Morgan conveniently stumbles upon the same community of survivors that Sherry fell in with. What a stroke of luck?

This is the other big frustration on Fear the Walking Dead this week, namely that some big plot turns happen, but they all feel too easy, and not effectively earned. After Dwight is introduced to Sherry’s community, a group of Virginia’s rejects that wear masks to hide their identities from Virginia’s rangers, he quickly learns that they’ve also captured Al. Sherry vouches for Dwight and Al though, and gets them set free, in turn allowing Al to convince the masked survivors not to try and destroy the MRAP, which happens to have freshly re-fueled at the oil fields. Instead, a fairly thrilling heist takes place, wherein Dwight manages to recapture the MRAP from horseback, along with Sherry’s people, and surprisingly manages to do so without incident, largely because Virginia weirdly left just one guy to look after it. Look, I know it’s the MRAP and everything, but why the hell would it be traveling without an escort of rangers?! Virginia was basically begging for it to get stolen back by Morgan’s allies!

So, with the MRAP now back in Al’s care, Morgan also happens to ride up, having rounded up the fleeing driver. On this note, Morgan showing up again here feels way too easy, and likely happened simply for the sake of moving the plot along. Sure, Morgan is wandering freely right now, but the odds of him stumbling onto the heist right as the driver was fleeing, and in turn finding Sherry’s community, feels incredibly unlikely! Regardless, a bit of a power struggle ensues between Morgan and Sherry’s people, with Morgan urging Sherry’s community to temporarily abandon their plans to assassinate Virginia. Sherry especially however stubbornly wants to proceed ahead, even roping Dwight along for the assassination effort, against Morgan’s wishes. 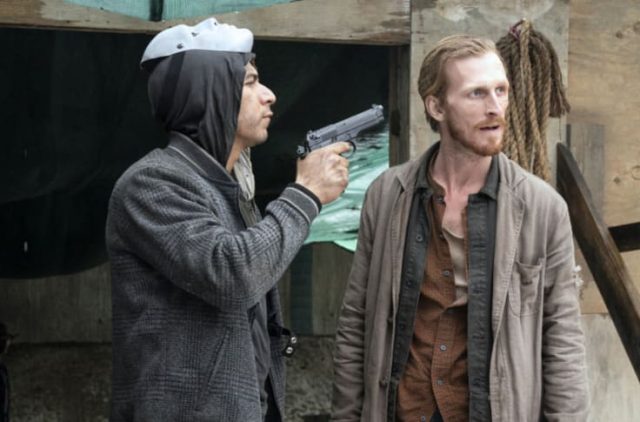 Again, when this episode focuses on the renewed, yet strained relationship between Dwight and Sherry, and how the two have continued to evolve in the wake of their post-Saviors experiences, it’s quite good. Dwight and Sherry ending up ideologically divided, and Dwight being torn between loyalty to Morgan and loyalty to Sherry, all makes for great, potently dramatic material. The big problem with this episode however, as I said, is that the masked survivors’ plan to lure Virginia to them, and take her out with the MRAP’s guns, is obviously going to fail. Not only that, but it’s a stupid plan to begin with! Obviously, the Pioneers are not dumb enough to serve Virginia up on a platter, even with Dwight claiming to have found a new community (which is not technically a lie), so when a bunch of Virginia’s people show up without her, thus thwarting the assassination effort immediately, it’s hard to truly be surprised.

Even Sherry suddenly deciding to throw Dwight into confinement with Morgan and Al before her community’s assassination attempt on Virginia, conveniently allowing Dwight to immediately abandon his backslide into violence and terror, feels too convenient and unbelievable. Moreover, when Sherry subsequently insists that she can’t allow Dwight to become who he was under Negan again, before bitching about how she needs to take charge and eliminate problems on her own terms, it just makes her look like a massive hypocrite! Sherry ultimately forcing Dwight away from her and her people similarly feels irritating and unbelievable, even if it does lead into the better result of Morgan enlisting Nora’s people to help with the development of his budding community. At least most of the material between Dwight and Sherry is pretty good this week, but Sherry once again disappearing into the wind kind of undermines that a bit, especially when her people don’t prove to be the sharpest tools in the shed. No wonder Virginia rejected them!

“Honey” mostly delivers in terms of further fleshing out the long-awaited reunion between Dwight and Sherry, but Sherry’s community is pretty unimpressive, especially when they force most of this episode to be anchored by an assassination plot that was obviously never going to work. It’s way too early in the season to compromise Virginia, and even if it wasn’t, her community is too sprawling and powerful to just wrap up on a whim. The end result of Sherry once again disappearing, leaving Dwight to wander with Morgan and Al again, also feels needlessly annoying. At least Morgan can start honestly building up a true resistance to Virginia now, thanks to the recruitment of Nora’s community, but that’s going to take time, meaning another inevitable perspective shift next week. That should hopefully ease the pain of Dwight’s and Sherry’s initial reunion ending on a bit of a sour note.

Fear the Walking Dead 6.5: "Honey" Review
Fear the Walking Dead nicely fleshes out the initial reunion between Dwight and Sherry this week, even if Sherry's community wastes too much time on a feeble effort to kill Virginia.
THE GOOD STUFF
THE NOT-SO-GOOD STUFF
2020-11-09
73%Overall Score
Reader Rating: (0 Votes)
0%