Fear the Walking Dead stumbled a bit last week, despite getting to build upon the long-awaited reunion between Dwight and Sherry, but that’s okay, because the show can move back to Virginia’s home turf this week. This time, it’s June occupying most of the storytelling focus, shortly after being transferred into Lawton to reunite with her own spouse, as a gesture of goodwill after John’s work ‘solving’ the Ranger Cameron murder mystery. True to form, “Bury Her Next to Jasper’s Leg” returns Fear the Walking Dead to top quality this week as well, framing virtually this entire episode around a major crisis at Tank Town, one that appears to indicate just how dangerous Virginia’s currently unknown enemies actually are.

With June taking up the protagonist role on Fear the Walking Dead this week, you can imagine that the bulk of the storytelling in this case involves saving lives against impossible odds. June has predictably been put to work as a roving nurse for Virginia’s communities, but has also quickly grown frustrated with her lack of resources and ability to accommodate large numbers of patients. Despite Sarah tagging along as June’s assistant (this marks the first time we’ve seen Sarah so far this season!), June is not having much more luck saving wounded, even having to contend with the recently dead almost immediately re-animating and attacking her! Fortunately, Sarah’s around to kill any fresh walkers, before June can be compromised.

This already sounds like a pretty big problem, but June’s true issues were yet to come! After failing to save yet another survivor, June contemplates fleeing with John, with John also being quite shaken after witnessing Janis’ grisly end a couple of episodes ago. Before the two can finalize a plan to flee Lawton however, Luciana frantically radios for help, alongside Virginia’s rangers, declaring that an explosion has occurred in Tank Town! Numerous people are injured, and June and John have no choice but to race to the scene. From here, the entirety of the storytelling revolves around the horrors at Tank Town, presenting a fresh scenario that manages to be terrifying and disturbing, even without having to lean on walkers for the most part.

In fact, it’s when walkers do show up that this episode’s storytelling slumps a bit. In fairness, AMC’s Walking Dead TV universe has already been pretty inconsistent when it comes to how long it takes for people to fully die and re-animate, especially when it comes to dying with walker bites as opposed to dying without them. In this case though, corpses re-animate into walkers almost instantaneously upon death, which definitely appears to be at odds with how re-animation was previously portrayed in this shared TV universe. Frankly, it just seems like the instant re-animations happened so that the drama could be forced along, and there was already plenty of drama going around without that!

When the storytelling doesn’t involve walkers however, Fear the Walking Dead once again delivers a superb offering this week, possibly putting Season Six on track to be the show’s best selection of episodes since Season Three, if the season can keep this narrative momentum up. There’s some really awesome narrative twists towards this episode’s climax too, beginning with the winds changing after Virginia insists on interrogating a dying suspect about the mysterious, “The End is the Beginning” graffiti that’s now made its way to Tank Town. This not only confirms that the explosion wasn’t an accident, but also eventually results in the altered winds making the entire oil field violently go up in flames! This is already a big issue, since it eliminates a huge resource for Virginia’s communities, more or less crippling their ability to use vehicles, and setting Fear the Walking Dead along the same largely gas-less path that The Walking Dead has been on for a couple of seasons now, and that The Walking Dead: World Beyond started on.

Somehow, this episode packed in an even bigger surprise from here though, namely Virginia getting bitten! After the second explosion temporarily knocks out and traps Virginia and June, Virginia ends up chomped in the hand before she can take out a nearby walker, leading to June holding a nearby axe hostage. June appearing to let Virginia die and turn feels like just desserts at first too, presenting an excellent scene wherein all of June’s impotence and frustration with saving lives comes to the forefront, ironically threatening Virginia’s life. Once Virginia brings up Dakota however, June reluctantly chops off Virginia’s hand, effectively saving her life, despite the fact that Virginia indirectly caused the deaths of every trapped worker at the oil field. This is a huge decision that’s already very controversial among June’s allies, most notably John, who makes the heartbreaking decision to sneak off and abandon June in the closing seconds of this episode. In exchange for sparing Virginia however, June does get the hospital she wanted in the end, and she may need it, considering Virginia’s confirmation that some deadly new enemies are gunning for her and her people! 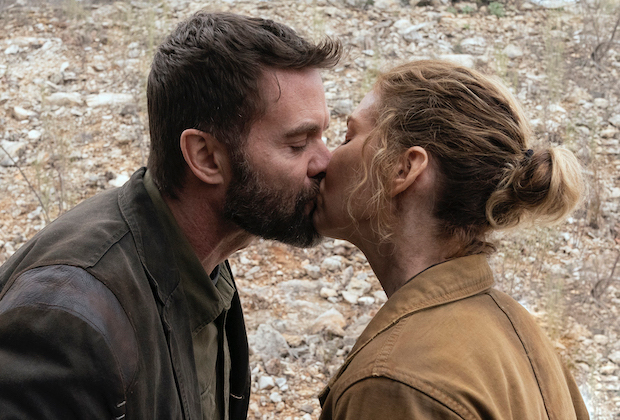 “Bury Her Next to Jasper’s Leg” once again leverages one of the best characters on Fear the Walking Dead to deliver another superb storyline this week, thankfully scrubbing away last week’s weaker episode surrounding Dwight, Sherry and Al. The loss of the oil fields, and Virginia being unexpectedly bitten, are excellent story twists, as is June making the shocking decision to save Virginia’s life, even though letting Virginia die would theoretically solve all of her and John’s problems. This effectively exemplifies June’s commitment to saving lives, even the lives of supposed villains! The standout story momentum from this episode also puts Fear the Walking Dead at a potent advantage for next week’s episode to boot, which will serve as an early midseason finale for the show, on account of Season Six’s production formerly being shut down by the COVID-19 pandemic. Perhaps then we’ll get a chance to meet the people that Virginia seems to be so scared of. Virginia being afraid of another group is a lot of hype for these unseen antagonists to live up to, but considering how surprisingly solid a lot of Fear the Walking Dead’s current season has been so far, I have faith that we should hopefully be meeting another exciting threat soon, one that could astonishingly wind up making Virginia feel like the lesser evil!