After two weeks of superb drama and outstanding franchise tie-ins for the Star Wars faithful, it was inevitable that The Mandalorian would have to slow down at some point. That point is wisely being taken for Season Two’s penultimate episode this week, as Djarin begins his efforts to retake Grogu from Moff Gideon. “Chapter 15: The Believer” is nonetheless built around a pretty great hook though, with several fan-favourite characters coming together to try and determine the location of Gideon’s Imperial ship, in turn setting up a dramatic final turn for next week’s season finale. Despite some more action naturally being on offer here though, this week’s episode of The Mandalorian takes a more pensive tone overall, framing itself around an attempt to re-examine one of the oldest conflicts in the Star Wars universe.

Things begin with another exciting character reunion, one teased at the end of last week’s episode, as Cara Dune travels to the Karthon Chop Fields, a New Republic scrapyard for old Imperial ships and other such junk, to fetch Bill Burr’s Migs Mayfeld. Burr was one of last season’s best guest stars, and it’s awesome to see him return, this time as a more begrudging ally of Djarin. There’s naturally plenty of tension considering that Mayfeld betrayed Djarin during their previous mission together, but with Cara’s New Republic resources, Mayfeld can be effectively motivated by a reduced sentence. Too bad Djarin still has to spend most of this episode hanging out with Mayfeld though, after some advanced Imperial scanners leave Cara’s, Fennec’s and Boba’s presence unworkable on the mission to find Grogu’s coordinates. 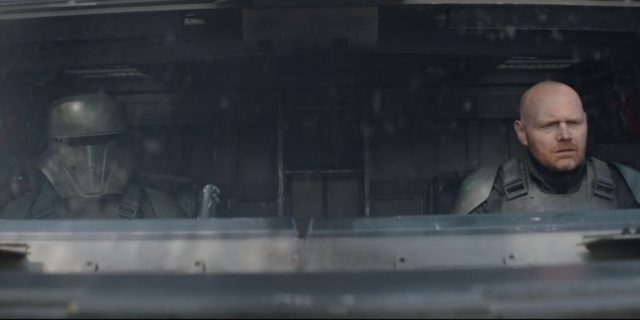 Those coordinates can be found on yet another all-new planet, Morak (not to be confused with Morag from Disney’s Marvel Cinematic Universe), where the remnants of the Empire happen to be mining a highly volatile mineral called Rhydonium, to some unknown end. These Rhydonium transports allow Djarin and Mayfeld to steal some Stormtrooper gear and blend in, just in time for some pirates to attack! This serves as one of the two major action scenes in this episode, with Djarin having to engage the pirates atop the transport while Mayfeld tries not to detonate the explosive Rhydonium on the drive. It’s a pretty cool highlight sequence, though it still feels pretty small when you compare it to the amazing action set pieces throughout most of this season, and particularly those of the last couple of episodes.

After the pirates are finally driven off, Burr’s guest appearance is then brilliantly leveraged for some introspective conversations with Djarin. Being an ex-Imperial sharpshooter, Mayfeld naturally has a different view of the battle against the Empire, and the poor, destitute people caught in the middle of it on lesser planets. Mayfeld even claims that little has changed for these people with the coming of the New Republic, an idea that The Mandalorian has cleverly touched on before. As much as Disney’s new Star Wars movies have happily framed the New Republic as the heroes of the post-Empire era, The Mandalorian has added more effective shades of grey to the Empire’s defeat. As initially odd as it sounds, the New Republic has merely presented a new set of problems for many people across the galaxy, especially when the entire Outer Rim remains more or less untouched by the supposed ‘liberation’ of the galaxy from the Empire’s grip. 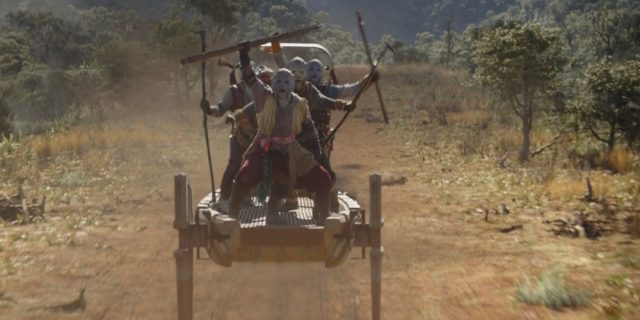 Things get even more challenging once Djarin and Mayfeld successfully bring their Rhydonium transport to Morak’s Imperial base as well, at which point Mayfeld can make a break for the terminal that can give him Moff Gideon’s coordinates… Only to find the mess hall containing them inhabited by his former commanding officer. This eventually forces Djarin to remove his helmet (once again giving Pedro Pascal a welcome chance to actually be visible under his costume!), only to have the Imperial officer, Valin Hess, quickly become suspicious of him. Mayfeld thankfully manages to intervene enough to pacify Hess though, and the trio even share a drink at this point, only for Hess’s dismissive comments on a bloody battle Mayfeld was involved in to eventually set him off. The shocking result is Mayfield quickly shooting his former CO dead in the middle of the mess hall!

This unexpected turn kicks off this episode’s climax, which features more solid Stormtrooper skirmishes, particularly while Djarin and Mayfeld have to sidle across a nearby dam to get away. Thanks to some fire support from Fennec and Cara however, the two do manage to escape on Boba Fett’s ship once again, with Boba dropping one of those impressive explosives from Star Wars: Attack of the Clones to do away with some pursuing TIE Fighters as an awesome final strike! Mayfeld even shoots the Rhydonium supply to cripple the Empire on the way out, simply telling Djarin, “We all have to sleep at night.” It really was fantastic to see Mayfeld’s character go from a greedy traitor to a downtrodden, war-scarred victim in this episode. Even better is that Cara forges the paperwork to claim that Mayfeld was killed on Morak, effectively allowing him to go free. This might be a little cheesy in the moment, but it does provide a welcome chance for Mayfeld to return again in the future, if he can stay out of more trouble anyway!

It’s hard not to get excited about the final moments of this episode to boot, when Djarin makes the same not-so-veiled threat to Moff Gideon that Gideon originally made at the climax of Season One, in relation to Grogu. This primes The Mandalorian for a thrilling end to its second season next week, and one where we can finally be reunited with Grogu, after this episode marked the series’ first real instance of Djarin’s adorable charge being entirely absent. “Chapter 15: The Believer” does slow The Mandalorian’s storytelling down quite a bit overall, sometimes to a fault, even if its re-examination of the fall of the Empire and subsequent rise of the New Republic is nonetheless interesting and thought-provoking. The altered perception behind Migs Mayfeld also allows Bill Burr’s standout guest character to take on a whole new side, one that promises another rewarding return for Mayfeld down the road.

I imagine that next week’s season finale will go back to showstopping spectacle, but even if it’s easy to miss the dizzying narrative highs of the past two weeks here, it also wasn’t so bad to have The Mandalorian change gears for a week, despite Djarin’s band of misfits not totally coming off as the ‘Suicide Squad’ of Star Wars fans’ dreams. Of course, even with Mayfeld in the wind for now, Djarin will still need all the help he can get against Moff Gideon’s forces, so we have at least one more week to keep savouring Djarin and his friends sticking it to the Empire yet again, with next time likely bringing even more carnage and mayhem in the process!

The Mandalorian 2.7: "Chapter 15: The Believer" Review
The Mandalorian slows down a bit this week, sometimes too much, but it nonetheless presents an interesting re-examination of the war against the Empire, thanks to another great guest turn for Bill Burr's Migs Mayfeld.
THE GOOD STUFF
THE NOT-SO-GOOD STUFF
2020-12-12
83%Overall Score
Reader Rating: (0 Votes)
0%