Doctor Who’s foundations were shaken to the core with the end of Series Twelve last year. The Doctor found out that she wasn’t a true-born Time Lord, she was displaced from a parallel universe, and she had numerous unknown regenerations before William Hartnell’s recognized First Doctor incarnation from the real-world 1960’s. That’s a lot of staggering new developments with which to lay a foundation for Series Thirteen, which is apparently targeting a late 2021 premiere. Before that though, Doctor Who needs to follow through on its new commitment to an annual New Years special, and thus, we have, “Revolution of the Daleks” to kick off 2021, and to tide us over while we wait for the next proper season of the show.

I feel like I say this every year, but it bears repeating; Doctor Who specials can be notoriously uneven in quality. Fortunately, the show’s previous New Years special, “Resolution” turned out to be a gem, providing an interesting reinvention for The Doctor’s murderous archenemies, the Daleks, albeit one that was noticeably stolen from Sony Pictures’ Venom movie. That special is a bit of a tough act to follow though, and unfortunately, “Revolution of the Daleks” falls well short of it in several respects. It attempts to keep building on current showrunner, Chris Chibnall’s revised take on Daleks and Dalek lore, but this latest New Years special does so with mixed success. This is because, despite some good ideas within it, “Revolution of the Daleks” is a mess, and is fatally unable to commit to an over-arching theme or narrative direction.

What’s especially frustrating about this is that the special begins on a pretty solid note. Chris Noth’s Jack Robertson makes a comeback to swipe those melted Dalek remains from, “Resolution”, apparently becoming politically ruined after his toxic waste scandal from, “Arachnids in the UK.” After making a shady pact with British Prime Minister candidate, Jo Patterson, Robertson delivers the Dalek shell to a clandestine research facility, where it’s reverse-engineered, and turned into a hyper-efficient, non-lethal security drone, which Patterson plans to use in order to keep the streets of England safe. Inevitably though, the project’s head eventually discovers traces of organic matter within the melted shell, leading to him cloning a new Reconnaissance Dalek (somehow?), and ultimately becoming a puppet for a new Dalek invasion of Earth.

That actually sounds pretty cool in concept, especially when it plays well off the heightened anxiety in the UK surrounding real-world issues like the freshly-minted Brexit. Sadly though, this early momentum is shed fairly quickly, especially where The Doctor and her companions are concerned. You see, through all its ambition to deliver the most epic, earth-shattering season finale in the show’s history last year, Doctor Who ultimately wrote itself into a corner. There’s no believable way to get The Doctor out of her asteroid prison (though I do love the fact that said prison also contains some recognizable Doctor Who antagonists, including a Weeping Angel, and even the Pting!), and the companions similarly don’t have a logical way to get involved with the show’s latest conflict. Instead, Graham and Ryan simply bring the news of the impending Dalek force to an obsessed Yas via smartphone (seriously?), after Yas is apparently unable to let go of the fact that The Doctor has been missing for ten months, and is presumed dead. 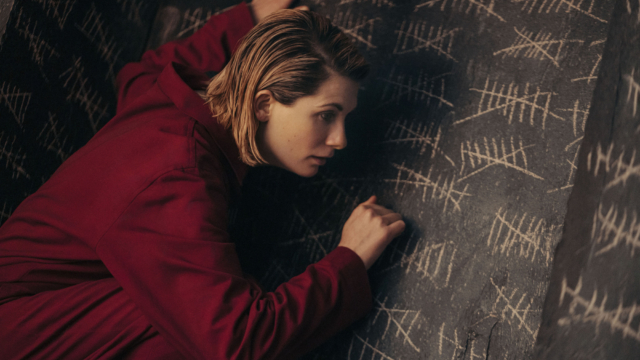 So, yeah, the companions discover the renewed presence of Daleks using… The internet. That’s already pretty lame. Even worse however is that this New Years special criminally wastes the return of John Barrowman’s Captain Jack Harkness! Captain Jack’s return has been teased for a while now, especially when he tried and failed to warn The Doctor about The Master’s Cyberman campaign from last season’s finale. Barrowman does at least slip back into the part of Jack like a glove, getting some very amusing lines in, and bailing The Doctor out of jail with a magic ball that both stops time and goes through walls. Oh, come on, even by Doctor Who standards, that’s complete bullshit! You see what I mean about the show writing itself into a corner with The Doctor’s capture?

Regardless, The Doctor reunites with her companions, plus Jack, and they learn of Robertson inadvertently bringing Earth’s (and the universe’s!) greatest threat back to it. I have to admit as well that I did really enjoy Chris Noth’s return performance as the aggressively slimy, obliviously selfish Robertson. His silly, griping and persistent complaints about discovering the true agenda of the Daleks are pretty funny. Hell, Robertson even selling out The Doctor to the Daleks during this episode’s climax is also pretty inspired, even if this special unfortunately doesn’t go all the way with that idea. I am nonetheless happy to see Robertson’s political career restored in the wake of taking credit for The Doctor yet again saving Earth from the Daleks though. Hopefully Noth can make another return appearance on Doctor Who next season! 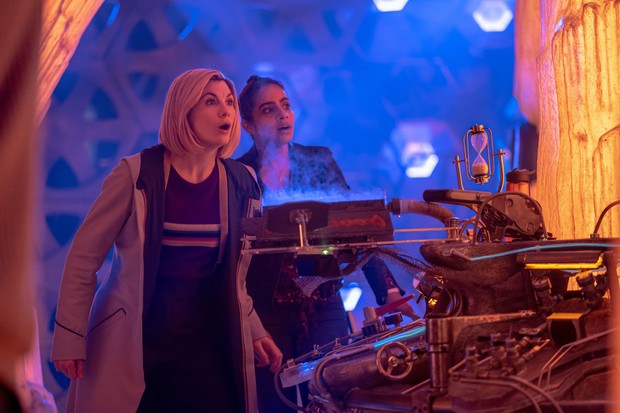 So, what is The Doctor’s plan to stop the Daleks, pray tell? Well, after discovering that the cloned Dalek has itself begun cloning a new army of Mutant Daleks, offshoots of that same Reconnaissance Dalek that was originally revived, The Doctor calls in an army of Dalek Enforcers to kill them. Wait, what?! Okay, fighting Daleks with more Daleks is something that could have been really exciting, but it barely registers in the end, because the two strains of Daleks don’t have much of a battle. Instead, Robertson’s attempted betrayal of The Doctor inadvertently buys Jack, Graham and Ryan enough time to rig and detonate the Dalek Enforcers’ spaceship, and the rest of the Daleks are taken out disappointingly easily by The Doctor rigging her spare TARDIS to fold in on itself, trapping the Daleks in the void. Okay, this handily resolves The Doctor having two TARDIS’s after last season’s finale, but it also leaves the supposed deadliest and ‘purest’ of Daleks to go down frustratingly easily. In fact, this entire New Years special kind of makes the Daleks look like easily-goaded morons in too many respects, despite The Doctor bending over backwards to stress to Robertson that they’re supposed to be fiendishly intelligent!

Another frustratingly mishandled element behind this New Years special is the previously-reported exit of Ryan and Graham from the show. Yas’ sudden obsession with The Doctor’s survival, and one semi-inspiring speech from Jack, sets her up to stay aboard the TARDIS for at least one more season, but after Ryan rather abruptly decides to leave, Graham just shrugs and leaves with him, despite having no prior desire to do so. Not only is this an infuriatingly weak exit for Graham especially, but even Ryan’s exit feels too abrupt here. Yes, Doctor Who has been flirting with the idea of Ryan eventually staying behind and committing to his life on Earth, but there was nothing in this special that seemed to solidify for him that now was the time to go, and this was doubly true for Graham! The Doctor does mention the shocking revelations about her formerly unknown past to Ryan, but this still doesn’t provide a believable reason for Ryan to leave The Doctor’s current crew.

Even more confusing is that Ryan and Graham get some Psychic Paper from The Doctor as a parting gift, despite the fact that The Doctor has never given anyone a parting gift of that nature, and they then decide to abandon their lives in Sheffield anyway! Instead, the two form something of an amateur investigative force, looking for weird incidents on Earth, and trying to get to the bottom of them. I’m sorry, is this supposed to be some sort of backdoor pilot pitch for yet another ill-fated Doctor Who spin-off? If not, why not just have Graham and Ryan stay in Sheffield? The flash of Grace before Ryan’s eyes is especially confusing. Is this a hint that Ryan and Graham will still be part of this show somehow? Well, Clara and Me are still supposedly out there in the universe having their own adventures, as are Bill and Heather, essentially, and they’ve never returned since. I can’t see much reason to believe that things will be different for Ryan and Graham, sadly.

“Revolution of the Daleks” ultimately amounts to a frustrating, fumbled New Years special for Doctor Who, but it’s not a total loss. Jack Robertson strangely had a more fun and meaningful return than Jack Harkness, and the foundational premise of a Dalek shell being used for political gain is a pretty solid one. Despite that though, this New Years special makes too many storytelling missteps. The Dalek-vs.-Dalek battle is a complete waste, and while The Doctor’s solution to get rid of her new force of Daleks is fairly clever and fittingly ruthless, it’s also yet another solution that feels too easy, and relies on the Daleks being uncharacteristically stupid. Likewise, Captain Jack being little more than a Deus Ex Machina here, especially for The Doctor’s contrived escape from ‘space jail’, feels like a significant let-down. Even Ryan’s and Graham’s exit from the show feels lame and unsatisfying, with yet another promise of further adventures for two retired companions that I doubt the BBC has any active interest in revisiting at this point.

I guess Yas is still around at the very least. Hopefully her next batch of adventures with The Doctor prove a little more rewarding than this New Years special.

Doctor Who 2021 New Years Special: "Revolution of the Daleks" Review
Doctor Who fumbles 2021's latest New Years special, thanks to a lame exit for two of its companions, and a promising Dalek invasion plot that fails to deliver a good payoff.
THE GOOD STUFF
THE NOT-SO-GOOD STUFF
2021-01-03
67%Overall Score
Reader Rating: (0 Votes)
0%