Pennyworth is definitely in a very weird spot right now. Not only does Canada, along with other international markets, once again get Season 2’s new episodes several weeks later than they aired in the U.S., before they hit the same awkward stopping point with next week’s fourth episode, but even the show’s storytelling feels like it doesn’t currently know what to do with itself. “The Belt and Welt” unfortunately fails to fix many of the problems from last week’s episode, which leaves Pennyworth struggling greatly with its focus, and failing to properly capitalize on its bold changes to the status quo for this series’ sophomore season.

The upside at least is that, “The Belt and Welt” once again delivers some decent excitement during the climax, and in fact delivers an astonishingly bloody climax at that! Before that though, we have the better part of an hour to slog through yet more aimless filler material, while Pennyworth once again fails to properly unify its character arcs, and once again fails to make Alfred’s desire to flee to the U.S. be in any way interesting or engaging. Yes, I’m well aware that Alfred will inevitably end up in Gotham City with Thomas and Martha at some point, and Pennyworth does have to start sowing those seeds early. Even so, this series clearly has no idea how to actually go about divorcing Alfred from the large-scale conflicts that are currently unfolding in England, so it’s essentially throwing everything at the wall, and awkwardly trying to see what sticks.

So, what happens with Alfred’s core story arc this week? Well, Alfred, Bazza and Dave Boy naturally decide that they need to figure out who stole their money, and took Alfred’s mother hostage. All the while, Alfred continues to be tormented by nightmares of his dead father, though they do at least give him a source of inspiration; Only someone close to Alfred, who was aware of his money stash, could have logically catalyzed the robbery. Alfred goes on to suspect his old SAS superior, Captain Gulliver Troy, the man who seemingly helped break Colonel Salt out of custody during the season premiere, and in following this trail, he has an interesting encounter with ‘Gully’s’ young, disinterested wife, Melanie. This teases a better storyline later, as does Alfred confronting Gully, only to be offered a job alongside Bazza and Dave Boy, but so far, nothing comes of it. Instead, Alfred spends yet another episode doing little more than chasing his tail, until the final minutes.

This might have been more acceptable if Pennyworth had currently found a way to rope Alfred into the all-out war that’s now erupting between the Raven Union and the English League. Hell, that war has practically found its way to London’s doorstep by this point, and even then, Alfred keeps trying to shrug at it. Likewise, Thomas and Martha continue to do little more than bumble around, and have dull, unfulfilling sexual tension. At least Crowley manages to do something semi-interesting from Thomas’ end though, manipulating Archbishop Potter into an orgy that disgraces him, and humiliates the English League. As a result, Potter commits suicide, further embarrassing the English League, and forcing them to appoint a new Prime Minister. Who’s the new Prime Minister? We don’t know yet. Oh come on, seriously?! Sure, the Crowley plot is plenty intriguing, but it’s ultimately yet another narrative dead end this week, and it’s hard not to start feeling impatient with yet another story tease that’s currently left dangling. 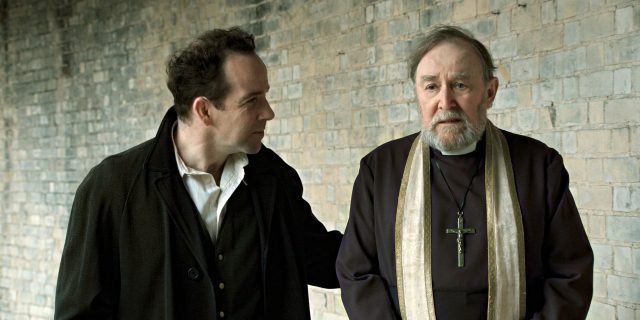 Even Bet, one of Pennyworth’s best characters, if not its best character overall, feels like she’s just in a holding pattern right now. Katie leads Bet to an old teacher’s home this week, a teacher that Bet immediately dislikes, and is inexplicably rude to, which is fairly amusing, at first. The bit eventually dies when Bet isn’t given anything worthwhile to do for most of this episode beyond berate this teacher though, even when she does finally, at long last, get through to Lord Harwood. This would be exciting, if the Raven Union was doing something beyond talking in circles and accomplishing nothing at this point, but at least the climax of this episode kicks the storytelling into a higher gear. After attempting to signal police for help, the teacher is shot to death by the cops, and Bet and Katie are forced to beat a heated retreat. Harwood seemingly betraying Bet, despite initially appearing to ignore the warnings of both Gaunt and Salt that Bet is a huge liability that the Raven Union should ignore, is actually pretty promising. It’s equally likely however that Gaunt especially could have gone over Harwood’s head, possibly suggesting that there’s about to be some discord among the Ravens’ ranks. Boy, wouldn’t that be an interesting twist for a change?

Okay, I will admit, at the very least, this episode’s climax is actually pretty exciting, if a little head-scratching. Dave Boy eventually recalls that he accidentally blabbed about Team Pennyworth’s big payout while drinking with some guys at the club, and those guys happen to be led by small-time crook, Vic Dobson, an infamously poor, reckless criminal that Alfred’s boys have had a previous encounter with. Since Vic is seeing Sheri, Alfred’s right-hand woman, the three men force Sheri to accompany them to, and I can’t believe I’m saying this, the carnival ground that Vic is hiding out in. Okay, DC, seriously, what is with your weird fetish for setting climaxes at carnivals?! Granted, this carnival is currently unpopulated, but after one of the more recent DC Extended Universe movies, Shazam!, along with the most recent seasons of HBO Max’s (formerly DC Universe’s) Titans and Doom Patrol, all had climaxes set at carnivals, I have to wonder if this is just going to be a weird running trope with live-action DC media now.

In any case, a lot of noteworthy stuff does happen here. Hell, we even get some legitimate fisticuffs! What a treat! Okay, specifically, Alfred confronts Vic, and the two have a glass-filled fight in the House of Mirrors, eventually leading to Alfred getting his foot stuck, and being forced to stab Vic in the neck. After a dying Vic then tries to pass off Alfred’s stolen money to Sheri, right before he bleeds out, Sheri attempts to make a getaway in Bazza’s car, only to hit some explosive barrels, which explode and kill her, along with blowing the money to kingdom come. Why are there random explosive barrels in the middle of a carnival, and why did Sheri clumsily drive into them and blow herself up? Yeah, it’s pretty bizarre, to say the least. Even so, this shocking demise for Sheri also ends up having tragic consequences for Bazza, who is caught in the explosion, and takes shrapnel in the gut. Fatally wounded, Bazza then makes Alfred and Dave Boy promise not to give up on their dream of going to America, before dying himself.

Yes, Pennyworth just killed off another of its lead characters, and a crucial part of Alfred’s fixer ensemble to boot! Bazza’s shocking death concluding this episode is admittedly a good twist though, even if it happens in a very weird, contrived way. Despite that however, it’s still too little, too late. “The Belt and Welt” yet again has Pennyworth wasting an entire episode on unfocused, aimless storytelling. The show is currently struggling to efficiently keep its plot moving forward, being stuck on an ineffectual Alfred mission that feels doomed to fail, despite viewers ironically knowing the final result of Alfred’s character arc in advance– Moving to Gotham City with Thomas and Martha, when they inevitably get married. Even more baffling is that England is currently engulfed in an enormous civil war, and yet, this sophomore season for Pennyworth is not only completely removed from that battle proper, but also practically devoid of real action in general so far. At least this episode’s conclusion worked to remedy that, but Pennyworth nonetheless needs a big shot in the arm. With only one week left before its Canadian airings go on (potentially indefinite) hiatus though, it doesn’t look like the series will be escaping its narrative woes anytime soon.

Pennyworth 2.3: "The Belt and Welt" Review
Pennyworth frustratingly wastes another episode on unfocused, directionless storytelling this week, though it's at least partially boosted by an exciting, surprisingly bloody conclusion.
THE GOOD STUFF
THE NOT-SO-GOOD STUFF
2021-02-02
68%Overall Score
Reader Rating: (0 Votes)
0%