Finally, Pennyworth is starting to feel like it’s actually going somewhere during the latter half of its sophomore season! Granted, the series is still sprawling and unfocused in a lot of respects, which can still work to its detriment, but, “The Rose and Thorn” nonetheless presents a more engaging narrative than most of what the season has delivered so far. Even better is that this week’s episode better ties Pennyworth in to some existing Batman Family mythology, particularly as it aspires to bring Lucius Fox properly into the fold, while also delivering another surprising nod to a future threat that will one day menace Batman and Gotham City in America.

This episode also takes a gamble by shifting focus entirely away from the Sykes sisters and Katie Browning, despite them formerly occupying many of the best scenes throughout this season so far. Instead, Alfred once again finds himself on, “One last job”, right as he prepares to present Thomas the necessary funds with which to finally make his and Dave Boy’s big move to the U.S. Despite Alfred initially rejecting this job, another proposal then comes straight from Prime Minister Aziz and The Queen, who corner Alfred in his own club, and give him the same seemingly simple objective– Rescue Lucius Fox!

In case it wasn’t apparent already, Lucius is operating as a CIA mole within the ranks of the Raven Union, with Thomas serving as his apparent handler. Despite the fact that the CIA publicly appears to be betting on a Raven victory in the U.K., Aziz and the English League still chance upon a mutually beneficial partnership with Thomas Wayne himself, who agrees in exchange to tip Aleister Crowley off to an apparent kidnapping plot by John Ripper. Finally, Pennyworth’s many Season Two dominos are starting to fall into place! The meandering storytelling isn’t always fixed, like I said, but it’s about time that Alfred’s mission, which finally pulls him back into the orbit of the English League (the narrative really should have done this several episodes ago!), finally started presenting some more worthwhile stakes, beyond the unexpected death of Bazza anyway.

Alfred’s dark turn this season continues to be apparent as well, particularly while he resumes his affair with Melanie Troy. That being said, some of the slings and arrows that Alfred is suffering through his quest to flee England aren’t really landing with the desired impact. It’s impossible to care about Alfred abandoning Sandra, for example, which means that Sid punching Alfred out for breaking his daughter’s heart doesn’t really feel like it truly matters at this point. Likewise, Thomas and Martha remain the worst couple ever this week, yet again, to the point where I have to wonder if Pennyworth is actively trying to troll Batman fans, and make the insufferable Thomas/Martha dynamic some sort of twisted running joke. This joke is only going to get more tedious now that Martha is pregnant as well, seemingly with Thomas’ baby. Could this be a Bat in the oven? Maybe, but knowing Pennyworth, I have a feeling that Batman fans are in for another fake-out. 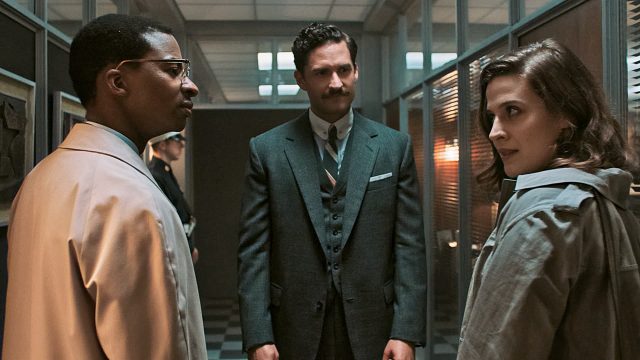 What isn’t a fake-out however is the great introduction shared between Alfred and Lucius, which is done under Martha’s watch. After Alfred, Martha and Dave Boy try to intercept Lucius at a diner, with Alfred insisting on trying to extract Lucius peacefully, the three nonetheless find themselves in a firefight. Fortunately, everyone on the heroes’ side survives, but all five of the Raven Union’s soldiers are killed, which has the added benefit of provoking an increasingly unhinged Lord Harwood. Like I said, it’s about damn time that Alfred finally started provoking the Raven Union again, and begrudgingly performing jobs for the English League. He’s wasted far too much time this season, on a fruitless quest that’s bound not to unfold the way he intends, considering the Batman Family mythology that virtually everyone is at least passingly familiar with in pop culture.

Speaking of Harwood, his deteriorating mental state reaches a boiling point in this episode, finally presenting another worthwhile development for the Raven Union after so many weeks of directionless arguing and little action. After Colonel Salt warns Harwood that traitors are conspiring against him, feeding into Harwood’s growing paranoia and insanity, Harwood eventually hears from a young upstart named Lieutenant Greaves that Mrs. Gaunt is innocent of her crimes, and should be pardoned. Harwood then responds to this plea by brutally beating Greaves to death with his cane, right in front of his entire council! As a result, Harwood is placed into confinement, with Salt’s recently-secured promotion to Gaunt’s old position thus seemingly positioning him to fully take leadership of the Raven Union from here. Considering that Salt is a nasty piece of work, and pretty much the only person in the Raven Union that truly doesn’t care about the international incident that Project Stormcloud will no doubt cause, this latest management shakeup among the Ravens makes for some very, very bad news for England!

Oh, and I should also mention the exciting twist behind Project Stormcloud, namely that it confirms a passing theory about another potential Batman mythology connection in Pennyworth, albeit one that could represent some unfortunate news for Batman/DC fans that speculated about the show’s placement in DC’s live-action multiverse. As Lucius confirms to Thomas in this episode, Project Stormcloud kills by overwhelming its victims with terror, and can be dispersed from devices no bigger than a cigarette lighter, on a city-wide scale! This would seemingly confirm that Project Stormcloud is a forerunner to future Batman villain, Scarecrow’s Fear Gas, which is a surprising, but awesome connection to Batman lore for Pennyworth to take with its main threat this season!

The caveat however is that both the Gotham universe and the universe of Christopher Nolan’s Dark Knight movie trilogy, both of which certain Batman fans have posited that Pennyworth may serve as a prequel to, had different explanations for where and how Scarecrow’s Fear Gas originated. If Project Stormcloud is indeed Pennyworth’s take on the future Scarecrow’s Fear Gas, it would appear to confirm that the show is not in fact a prequel to Gotham, nor is it a prequel to the Dark Knight movies. I suppose it’s possible that Pennyworth could take place in a Post-Crisis rendition of the Gotham universe, assuming that The CW’s Crisis on Infinite Earths crossover event, which affects literally every Earth in DC’s live-action multiverse, regardless of whether or not they’re home to one of The CW’s DC projects, erased the Gotham universe after that show’s conclusion. Either way though, Project Stormcloud could finally settle the frequent fan debate of whether Pennyworth is connected to showrunners, Danny Cannon’s and Bruno Heller’s former Batman Family prequel series, Gotham, or whether it would go out of left field and ultimately reveal itself as a prequel to the Christian Bale-led Dark Knight movies. Sadly, it currently appears that both fan theories are false, and Pennyworth may simply take place on its own self-contained Earth within DC’s live-action multiverse at this point.

While it’s disappointing that evidence now appears to favour Pennyworth having absolutely no connection to a pre-existing live-action Batman canon, I’m nonetheless happy to see that the show is finally getting its act together, and properly bringing Alfred into the mostly flaccid war that it’s supposedly been building up all season. Alfred reconciling with his mother after being punched out by Sid, complete with Mary agreeing to go with him to America, is also pretty heartwarming, even if this is once again bound not to happen right away, because we still have at least a few more episodes left in this season. Regardless, “The Rose and Thorn” starts taking some noticeable steps in the right direction, even if it doesn’t completely fix some of this season’s persistent issues, particularly its increasingly tedious Thomas/Martha drama. Now that the over-arching battle for England is finally truly heating up though, hopefully Pennyworth can step up its excitement for Season Two’s latter half, and stop wasting time on meaningless squabbling that only distracts from far more important conflicts.

Pennyworth 2.6: "The Rose and Thorn" Review
Pennyworth finally starts bringing its disparate plot threads together in a better episode this week, even if this season still struggles with some of its persistent problems.
THE GOOD STUFF
THE NOT-SO-GOOD STUFF
2021-03-16
80%Overall Score
Reader Rating: (0 Votes)
0%