Omni-Man’s big secret is out, and thanks to the world bearing witness to his latest violent murder of Immortal, nothing will ever be the same. As Mark finally stares down his blood-soaked father, hearing that they need to talk, Invincible’s ultra-violent, stomach-turning season finale is thus kicked into motion this week. Amazon recently announced that Invincible has been renewed for Season 2 and Season 3, and that’s awesome news, considering that Season 1 ends by throwing open Pandora’s Box when it comes to the real threat facing Earth, and how Omni-Man was always going to be a part of it. The result is a fantastic finale for Season 1 that stands as Invincible’s best episode to date, despite how difficult it can sometimes be to watch!

“Where I Really Come From” begins with Nolan explaining his true heritage to Mark. As it turns out, Viltrum really is a perfect society, though rather than benevolence and altruism, this perfection was achieved through brutal violence and savage eugenics. Once the supposed ‘weaker’ half of Viltrum’s population was killed, the survivors turned to converting the rest of the planets in the galaxy to Viltrumite rule, with Nolan ultimately being assigned to Earth. It also turns out that Nolan is many centuries old to boot, with Viltrumites aging more slowly as time goes on, a fate that’s also in store for Mark, ensuring that he’ll outlive anyone he’s ever known on Earth. Regardless, Nolan’s true mission as Omni-Man is to bring Earth under Viltrumite rule, having Earth’s human population swear fealty to the Viltrumite Empire, in exchange for security, weapons and a guiding hand to bring out the best in human civilization. If they resist? Then Earth is obliterated, alongside numerous other planets and intelligent civilizations that refused to bend the knee to Viltrum.

This sums up the over-arching satire and stark social commentary surrounding Invincible quite beautifully. The Viltrumites are supposed to be noble and advanced, but power has corrupted them into angry, vengeful gods whose supposed perfection has come at an unspeakable cost. Despite Viltrum DNA being so pure-blooded that Mark is more or less entirely Viltrumite as well (why would Nolan previously be concerned about Mark not having powers then?), Mark ultimately rejects his father’s worldview, and that of Viltrum as a whole. Mark then makes the bold decision to attack his invulnerable, all-powerful father, while Nolan becomes gradually more violent and harsh in kind, to the point of violently beating Mark in response to his son’s defiance!

This is where this episode gets very emotionally challenging. As the GDA, and the rest of the world, try to keep up with the newly-exposed, corrupted Omni-Man, Nolan’s and Mark’s battle takes them into Chicago, where Mark is violently tossed around, causing tons of unchecked destruction and casualties. Mark tries to save as many people as he can, but Nolan simply keeps knocking him away, resulting in even more awful deaths that Mark is helpless to stop. Eventually, Nolan even murders an entire subway train’s worth of people using Mark’s body to boot, desperately trying to drill into his son that human life is meaningless, and Mark shouldn’t concern himself with the deaths of insignificant, lower beings. This entire Chicago-set climax for Invincible’s first season can be legitimately hard to watch because of all this wanton, gory death. The sheer scope of its violence against innocents could possibly be a big part of why this series was done in animation, not in live-action. Were this season finale done in live-action, it would no doubt be downright traumatizing to many people!

Despite the overwhelming cost of human life however, and Nolan’s building rage that sees Mark become gradually more beaten and helpless, Mark refuses to back down. This ultimately leads to Nolan nearly beating his son to death, only to suddenly reflect back to an old baseball game he watched Mark play many years ago, with Debbie at his side. This internal conflict then leads to Nolan jetting off and abandoning Earth, allowing the GDA to retrieve Mark, and the Guardians of the Globe to try and help rebuild Chicago. There’s a bittersweet aftermath to the (very likely temporary) disappearance of Omni-Man, but it’s clear that a heavy cost hangs over Earth. The entire planet is reeling from the destruction caused by the battle between two of the world’s most powerful superheroes, one that appears to have initially broken the planet’s spirits, along with leaving the GDA almost no one to call in a future crisis.

Likewise, the Grayson family is forever shattered through Nolan’s revelations and actions as Omni-Man. Debbie’s attempts to hold strong for Mark eventually lead to her collapsing into a crying fit at home, though thankfully, Mark’s attempts to defend Earth weren’t unnoticed by the GDA, nor Amber. Yeah, Amber’s back to forgive Mark in the denouement, which I suppose is good. Eve even reveals her identity as Atom Eve to both William and Amber, before being humourously mistaken for Dupli-Kate. There’s a small sense of hope that manages to creep into Mark’s civilian social life here, perhaps because of Mark’s enduring adolescent resilience, resilience that can’t be truly shared between Debbie, Art or Cecil. 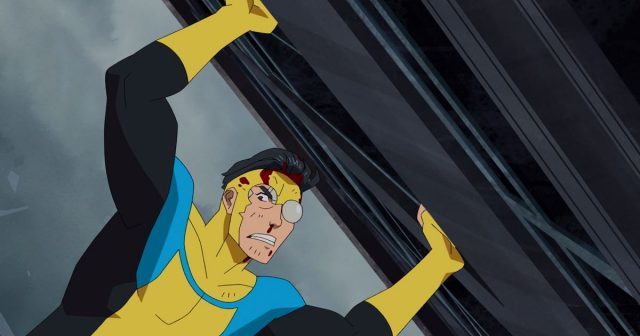 It’s oddly inspiring and uplifting that Invincible’s season finale manages to find the silver lining within even such an overwhelming, horrifically savage episode, one that seemingly crushes any hope for this world, and its superheroes. Still, Mark managing to carry on against impossible odds also manages to embody what’s great about superheroes in general, and that’s further punctuated by another amusing visit to Earth’s orbit by Allen the Alien. Allen comes far too late to warn Mark about Omni-Man’s true agenda, and how dangerous the Viltrumites truly are, but Mark manages to shrug even this off, saying it’s better he found out later, so he couldn’t obliviously blab to his villainous father. When Allen asks Mark what he’ll do next, Mark simply responds that he’s going to finish high school, despite a montage humourously coming before this response, one that shows the sheer scope of threats that now face Earth, threats that are now primarily going to be Mark’s responsibility without Omni-Man around. No pressure, right?

Invincible ends its first season on a hell of an emotional roller coaster this week, presenting an episode that’s both sickeningly destructive and nihilistic, while also being able to find hope and meaning within a world that’s seemingly dominated by an unstoppable force of evil. “Where I Really Come From” is an incredibly sobering new look at the true stakes facing Invincible and its world, but the surprisingly optimistic ending, along with the ballooning threats that tease a great increase in scope over the next two confirmed seasons, promise that the series is only going to get more exciting from here. As much as Invincible thrives as a biting satire of superheroes, it also succeeds as a celebration of humanity and, ironically enough, vulnerability. Those themes came into exceptional focus during a season finale that ultimately proved to be one of the best episodes of Invincible’s debut season, balancing its horrific violence with an almost perverse, but no less potent sense of hope. The Viltrumites, alongside Nolan, will almost certainly come back to Earth eventually, but if Mark’s determined to train for that war to come, he’ll at least have plenty of practice in the meantime, as no shortage of other looming threats are ready to take their own shot at conquering the world!

Invincible Season 1 Finale: "Where I Really Come From" Review
Invincible delivers a sickeningly violent, yet strangely uplifting season finale this week, one that promises even more excitement in the show's future.
THE GOOD STUFF
2021-04-30
96%Overall Score
Reader Rating: (0 Votes)
0%