The Flash’s current season returned to a superb high note last week, after the bittersweet life sentence given to Frost, in order to protect Central City’s metahumans from unjust persecution. That’s not the only major shakeup threatening to hit Team Flash as well, as, “Timeless” further foreshadows the show’s lead ensemble changing forever in the weeks ahead. It was recently confirmed that Carlos Valdes and Tom Cavanagh would be permanently exiting the show this season, and those exits are finally established in earnest this week, while Barry and Iris contend with a separate disagreement regarding what to do about the other Forces.

Clearly, Nora’s murder of Alexa has deeply affected both Barry and Iris, particularly after they ended up being the ones responsible for the resurrection of the Speed Force in the first place. Worse still however is Nora confirming to Barry and Iris that they were also directly responsible for creating the other Forces, something that Cisco and Chester soon corroborate, using archive footage. This inspires Barry to present an unorthodox, controversial solution to the problem of the freshly-murderous Nora– Erase the other Forces from time, which will neutralize Nora, and end her killing spree before she can do any more damage. Iris and Cisco are vehemently against this idea, both correctly citing the potential for another Flashpoint, though Barry remains determined to see his plan through, complete with seeking the help of Timeless Wells to make it happen.

This temporary conflict between Barry and Iris makes for another especially strong episode of The Flash this week, one that appears to set up a different sort of threat than your typical arch-villain. While Barry tries to rally Cisco, Wells and Chester to help him go back in time and erase the other Forces from existence, simultaneously utilizing Timeless Wells’ abilities to prevent further alteration to the timeline, Iris instead brings Allegra and Kamilla along with her to try and sniff out Nora, believing that Nora can be reasoned with, just like Mirror Monarch and Abra Kadabra. This subplot unfortunately carries the disadvantage of having to work with the rather contrived resolutions to both of those villain plots, but it still manages to beat the odds and provide some interesting development for Iris, after her attempts to find Nora instead lead her to Psych.

As much as it’s only touched upon here for now, Iris’ encounter with Psych ends up serving as the basis for an interesting new direction for her character, especially after Season 5’s big arc with Nora West-Allen/XS. Despite that version of Nora Jr. supposedly being erased from the timeline, Iris nonetheless worries about her ability to foster descendants, something that Psych taps into while trying to attack Iris at the old Allen house. It was also refreshing to see Iris’ pep talk strategy fail for a change, a surprising rarity for the Arrowverse (unfortunately, you don’t get to take a shot this time), as Psych instead doubles down on his attack, only for Barry’s intervention in the past to be what ultimately neutralizes him, and forces him to flee. 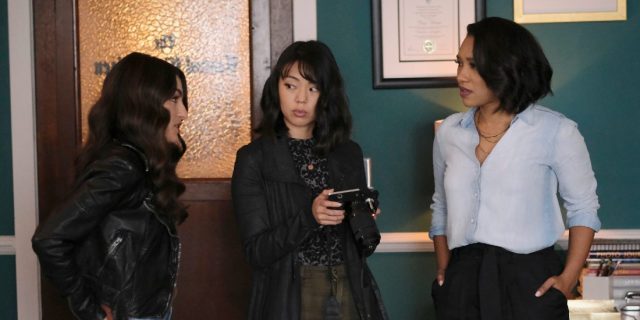 On that note, Barry faces his own doubt and insecurity in a great way here, after having a sit-down with Joe, in one of this episode’s best moments. Barry talks to Joe about the idea of ‘unmaking’ the other Forces, following Deon appearing at S.T.A.R. Labs to emotionally appeal for his own existence as the avatar of the Still Force (still not quite shot-worthy, sadly), but Joe gently responds by telling Barry not to judge his ‘children’ for who they are now, and instead think of who they could become. As much as this is admittedly a bit cheesy, especially considering the fact that Barry and Iris somehow birthed dimensional-defining forces through their love is sickeningly saccharine and inconceivably bizarre, even for both DC standards and The CW standards, the idea of Barry having to think in terms of personal development, not just seeing villains that he needs to stop, is fantastic. It’s a strong testament to how much Barry and Team Flash’s operation have grown over the course of seven seasons, and Joe’s wisdom helps Barry ultimately do the right thing, eventually smashing his Force-destroying gizmo in the past, thus ensuring that the other Forces, and their avatars, ultimately remain in existence.

The one unfortunate element of this otherwise mature, well-thought-out journey for Barry and Iris to find common ground regarding the other Forces is the fact that Alexa’s death is somehow immediately reversed, following Barry ultimately refusing to eliminate the other Forces from existence. Well, what was the point of Alexa dying at all then?! Instead of that bold turn sticking, Barry and Iris simply hold hands and wish Alexa back to life, and this somehow works. Yes, it’s incredibly stupid and contrived to the extreme, but unfortunately, it still doesn’t qualify for the Arrowverse Drinking Game. I know, it’s annoying. On the bright side, the rest of this episode is still pretty great, plus the idea of Barry and Iris trying to learn to be ‘parents’ to the new Force avatars that they’ve inadvertently created carries plenty of promise for the rest of this season, especially now that Season 7 has officially reached its halfway point as of this week.

This week’s narrative also ends with Cisco and Kamilla realizing that they want to start a life together outside of Central City, following Kamilla getting a high-profile new photography job offer in San Francisco. This departure is in turn encouraged by Wells, who appears content to return to his time bubble with his wife, even if this doesn’t quite feel like a full-on exit for Tom Cavanagh yet. “Timeless” thus makes for an overall superb showcase of how much The Flash has grown from a dorky, light-hearted superhero romp to a surprisingly deep, albeit still dorky superhero drama under new showrunner, Eric Wallace especially. This show has come a long way in seven years, with Team Flash actually functioning like multi-dimensional, complex adults by this point, not immature, naive adolescents making a game out of rounding up metahumans. That character evolution will no doubt be a heavy focus over the next several weeks especially, as Barry and Iris once again come face-to-face with their legacy, and try to do what they can to secure a bright future after they’re gone.

Who knows how many more seasons The Flash will ultimately run for, but one thing’s for sure; The influence of Barry, Iris and their friends will keep inspiring new generations of superheroes, even off-screen. This includes the future wielders of the new Forces, who have now been granted all they truly wanted to begin with; Permission to exist, for better or for worse.

The Flash 7.9: "Timeless" Review
The Flash delivers another standout episode this week, as Barry and Iris disagree over unmaking the other Forces, while Cisco prepares to embrace a new life path.
THE GOOD STUFF
THE NOT-SO-GOOD STUFF
2021-05-13
87%Overall Score
Reader Rating: (0 Votes)
0%