If you don’t know Josh Malerman by name, it’s still likely that you know of his work. Not only is his band behind the theme song for TV’s Shameless, but his novel, Bird Box, also became a massive Netflix hit a couple of years back. Since then, the author/musician/film producer has gone on to release a sequel to that very novel, in addition to a reissue of one of his earlier works. He calls it Goblin: A Novel in Six Novellas.

Originally published back in 2017, Goblin is a collection of several short novellas that combine to tell the story of an odd American town that is actually named Goblin. There, unnaturally heavy rainfall rarely stops, police officers are more inhuman than human, and strange things tend to happen. Hell, it even has a forbidden zone, which is its North Woods. Citizens are forbidden from entering those woods, because it’s the home of protected wildlife. There are also rumours of a witch, who’s capable of ripping one’s organs out of their chest and stomach.

Things begin on a normal but rainy night, with a truck driver named Tom taking an extra run instead of heading home and watching movies. He does it as a favour to his boss and friend, Jerry, but is also enticed by the triple pay that is on offer. It also seems like an easy trip, although it comes with rules. For one, the crate is to be delivered to an address in Goblin between 12am and 12:30am. It’s also not to be opened or checked on once it’s been secured in the back of the truck. Failure to follow these rules will result in the crate needing to be destroyed, and the same is true if its recipient isn’t home or doesn’t open his door.

In true horror fashion, Tom hears strange noises and sees odd things as this strangely heavy crate travels with him towards a town unlike any other. The result is the best story in this set.

The story I just described acts as both the prologue and epilogue, meaning that it starts at the beginning of the book and doesn’t end until its very last page. In-between are tales of several other people who are about to experience the strangest night of their lives.

The aforementioned stories offer an eclectic mix of tales, including:

Together, these strange stories give readers an insight into a seemingly average, but very odd town. One where constant downpours are more common than sun or gloom, and where said rain is both a symptom and an ominous sign. This wet weather provides a great atmosphere for everything that goes on within the town on this fateful day, and is as much a character as anything else.

Going into this review, I found myself extremely excited to start reading and discover what Goblin: A Novel in Six Novellas had to offer. Reason being is that, not only am I a big fan of horror and short story collections; I’m also a big Josh Malerman fan. I’ve yet to read all of his books (as I still have Unbury Carol, Malorie and Black Mad Wheel to get to), but he’s quickly become one of my favourite authors. I loved Bird Box when I read it three or four years ago, enjoyed The House at the Bottom of a Lake when I borrowed it from the library a couple of months ago, and absolutely adored Inspection. People don’t often mention it, so I may be in the minority here, but Inspection was fantastic, and is now one of my all-time favourites. I fittingly read it just before I dove into Stephen King’s The Institute.

Due to the above, I had Goblin‘s re-release date at the front of my mind, and was excited when I was able to obtain a review copy. This also means that I had high hopes for it. Looking back, they were perhaps a bit too high. Regardless, I ended up enjoying this collection, but not as much as I had hoped to. It’s quite good, but not great.

One thing that bothered me about this book was how unclear the size of Goblin truly was. Mr. Malerman often called it a city, yet the same several roads were usually mentioned, and the descriptions of the main drag made it sound more like a town than a metropolis. Furthermore, it seemed to be somewhat rural, given that it housed a hedge maze, had quite a few dirt roads and was full of personalized topiary. I’ve since read the blurbs on his website, and it’s described as being a strange town there. 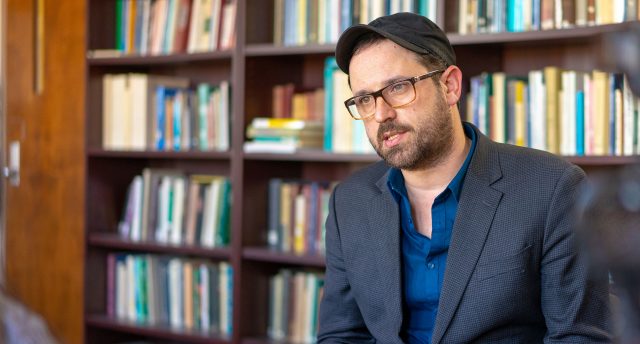 I also unfortunately found that the stories didn’t always stick their landings through their endings. They were all interesting and often unsettling, but there were parts that didn’t hit or work as well as they could’ve. The only one I struggled with, though, was the story about the tour guide who works at both the zoo and a slaughterhouse. It was a bit confusing at times, and was also a bit wordy. Don’t get the wrong impression, though: I’d much rather read anything by Josh Malerman than something by most authors. All of his books (that I’ve read) are good, including this one. It’s just not great like Bird Box or Inspection, and that’s okay.

For the most part, the writing found in Goblin: A Novel in Six Novellas by Josh Malerman is quite good. He’s great at using words to create an unsettling mood, and his stories are full of atmosphere. His gift shows through the pages here, and it was once again a treat to read his writing.

If you’re looking for a unique horror collection, Goblin should be on your list. Although it’s not the masterpiece I was hoping and expecting it would be, it’s still a rather good and recommendable effort. One that I’m happy I got to read, due to it being re-released. I’d been waiting a long time.