Loki made the bold decision to almost entirely break away from the TVA during its third episode this week. Instead, the growing, highly tense, very begrudging partnership between Loki and his new female variant took center stage in this case, after Loki thwarts his female variant’s attempt to reach the Time-Keepers, an act that ultimately strands both of them in the worst apocalypse that this new ‘Lady Loki’ kept on her TemPad device. The rest of this week’s episode thus unfolds with Loki and his unlikely new ally struggling to escape certain doom, all while the TVA presumably has their hands full with the many alternate timelines that the Loki variant has now created with her displaced time charges.

“Lamentis” and its central apocalypse scenario, true to the episode title, takes place on the futuristic mining colony of Lamentis-1, a location that carries some interesting significance from Marvel Comics lore. In the Marvel Comics Universe, Lamentis-1 is actually a colony of Xandar, the familiar planet from Guardians of the Galaxy that the Nova Corps. is based on. Both Xandar and the Nova Corps. were seemingly destroyed off-screen by Thanos during the events of Avengers: Infinity War, but if Lamentis-1 is still affiliated with Xandar in the Marvel Cinematic Universe, it could be a sign that Xandar, like Asgard, may persist in another form during the MCU’s future. This episode taking place almost entirely on Lamentis, during the far future of 2077, could also be a small tease for cosmic superhero, Nova (who, unsurprisingly, spawned from Xandar’s destroyed Nova Corps. in Marvel Comics lore), to eventually come to the MCU, something that Marvel Studios godfather, Kevin Feige has already claimed is almost certainly going to happen at some point.

Putting that aside however, I’m sorry to say that, to some extent, Loki’s storyline continues to slow down to a fault here. In fact, a pessimist could rightfully call, “Lamentis” a bit of a filler episode, even if it does still contain some crucial revelations and plot developments toward its climax. It’s also true that the rapport between Loki and his female variant is effortlessly entertaining, as the two constantly try to outsmart, outwit and manipulate each other in a desperate, unlikely bid for survival. We ultimately don’t learn too much about the female Loki variant in the end either, who is predictably cagey about her past. This may frustrate some Marvel fans, considering that we know all about Loki’s destiny over years of MCU movies, but we don’t know anything truly concrete about this new female Loki, beyond the fact that she resents being called, “Loki”, and that her chosen name is instead, “Sylvie.”

This is another very significant revelation to come from this episode, even if many Marvel fans already put it together. Sylvie’s chosen alias would seem to confirm that she’s the MCU version of Sylvie Lushton, best known as the second incarnation of Marvel femme fatale, Enchantress. The first Enchantress, Amora, is one of the most dangerous and frequently recurring Thor villains in Marvel Comics lore. The second, Sylvie, is a ‘new’ Enchantress that is effectively created by Loki in the printed panels, who grants her magical abilities, eventually empowering her to join the Young Avengers, a team that the MCU has been teasing at length throughout its current crop of Disney+ shows. It would thus appear that Sylvie Lushton/Enchantress and Lady Loki are indeed being merged into one character in MCU canon, as I previously speculated, and rather than being a creation of Loki, Sylvie instead appears to be a different Loki altogether, one that traveled a much different life path, to the point where even her gender is inverted from the MCU’s main Loki.

In any case, while it is fun to see Loki and Sylvie banter and scheme both with and against each other across Lamentis-1, as it faces total destruction due to a collapsing planet, it is also true that this entire episode is rooted in mischief and exposition, and not much else. There is a bit of a scuffle with the TVA during the early moments, but it doesn’t mean a lot, and if anything, it simply draws attention to a growing issue in the Loki series; Its nerfed lead character. Loki (and by extension, Sylvie) is supposed to be an Asgardian, an alien race that innately sports superior strength, stamina and durability, plus magical abilities in these characters’ cases, compared to earthbound humans, of which the TVA and Lamentis-1 is supposed to be comprised of. Despite that however, Loki and Sylvie visibly struggle to fight regular humans in this series, which is just plain odd. It hurts the appeal of this show’s action scenes, which have so far largely failed to pit Loki and his new variant up against genuinely impressive, imposing foes.

It’s also apparent that the inherent nihilism behind Loki and Sylvie being trapped in an apocalypse bleeds into the storytelling in an unwelcome way. Just as nothing matters for the timeline when Sylvie hides out in an apocalypse, this inevitably leads to nothing feeling like it truly matters in this episode overall, which fails to move Loki and Sylvie anywhere new, once they reach Lamentis-1. We do learn the basic overview of Sylvie’s MCU identity, and that the TVA’s agents are all time variants that the Time-Keepers seemingly brainwashed and forced to hunt other variants, but these nuggets of intrigue are unfortunately layered into an episode that’s built on an awful lot of filler. Loki’s and Sylvie’s quest to escape Lamentis-1 is predictably rife with failures and complications, but it does at least lead them to a really impressive one-take-style climax, after they race to a spacecraft that could free them from Lamentis-1’s imminent destruction! In the end though, even this doesn’t matter, with this week’s episode ending as the spacecraft is destroyed by planet debris, thus stranding Loki and Sylvie on Lamentis-1, and putting them right back where they started as the credits roll. 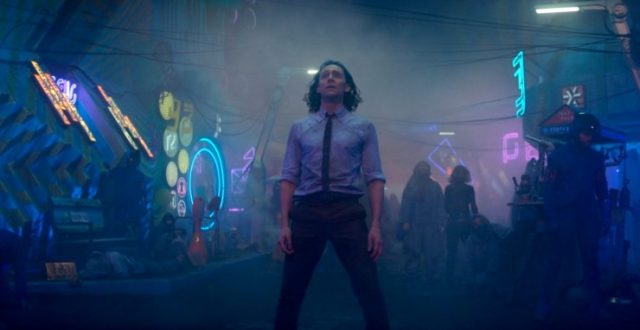 This last escape option being suddenly destroyed makes for a great ending cliffhanger, but it does have the unfortunate side effect of creating the feeling that, “Lamentis” wastes viewers’ time to an unwelcome extent. We may get a great double act between Loki and Sylvie here, as well as a few more exciting teases regarding the true, seemingly sinister nature of the TVA and the Time-Keepers, but most of this episode simply consists of Loki and Sylvie bumbling around within a doomsday scenario that they’re helpless to escape, at least in this episode’s case. It’s fun, but it’s also frustratingly disposable, while once again failing to fully recapture that awesome comedic energy that Loki’s first episode delivered in spades. I will say that the chance to break away from the TVA and explore a fully committed Loki-on-Loki dynamic is fairly welcome in concept, but it’s unfortunate that the series couldn’t find anything more genuinely exciting to do with this idea, especially when this episode marks the Loki series reaching its first season’s halfway point.

Loki 1.3: "Lamentis" Review
Loki fleshes out the eccentric relationship between its eponymous character and his female variant this week, though this comes at the expense of a disappointingly disposable spacefaring storyline.
THE GOOD STUFF
THE NOT-SO-GOOD STUFF
2021-06-25
75%Overall Score
Reader Rating: (0 Votes)
0%