It’s finally time! The Flash’s proper Godspeed arc begins with this week’s episode, after three previous bridging episodes that appear to serve as a way of slightly expanding Season 7’s episode order. Considering that there are only three episodes left in The Flash’s seventh season after this week however, I have to wonder whether most of the Godspeed arc is being merely set up here, in order to be fully realized next season. “Enemy at the Gates” would appear to support this theory to some extent, as it seems to set up a very intriguing mystery that will redefine the Arrowverse’s take on Godspeed, one that may move considerably beyond another run-of-the-mill good-vs.-evil speedster conflict.

Unfortunately, it takes a while to get to this intriguing hook, thanks largely to an episode that’s frustratingly full of distracted, inconsistent storylines. Many of this week’s core storylines feel like pure filler, even as Barry’s and Iris’ family plans appear to move forward, or so Barry believes. Despite Iris once again sitting out this episode, with Barry only speaking to her via cellphone in a couple of instances, Barry takes on a shared storyline for himself and his wife in this case, after his seemingly-erased future daughter, Nora visits him in a dream. This convinces Barry that Iris is pregnant, and that he and Iris are finally about to have their first child. If this sounds positively head-scratching to you, believe me, it is. If you think you know exactly how this storyline is going to turn out by the end of this episode as well, chances are, you’re exactly right.

Barry’s obvious fool’s errand of using dreams to predict whether Iris is pregnant (seriously, what the hell?!) is just one of many odd storylines this week though. Once again, it’s actually Joe and Kramer that deliver the most interesting material on The Flash this week, as they continue to try and hunt down Kramer’s missing foster brother, Adam Creyke. Unfortunately, this subplot gets frustratingly under-utilized, again, in favour of more inane and unsatisfying storylines with the rest of Team Flash. This possibly suggests that the Adam Creyke mystery is also meant to be a lead-in for next season, not an arc that’s fully resolved in this season. Then again, Joe and Kramer find themselves in quite a bit of peril by this episode’s epilogue scene, after an apparent metahuman attack appears to blow up the car they’re in! Okay, granted, I’m sure they’re just fine, but the only possible explanation I could think of for their survival is that Kramer will possibly protect them with metahuman abilities. Boy, wouldn’t it be a twist if Kramer was a metahuman this whole time?

I will also say that the actual Godspeed confrontation in this episode is pretty cool, even if it takes until the halfway point to actually get there. Before that, Frost continues to get angsty about Chillblaine, in a relationship subplot that remains infuriatingly stupid and pointless. Chillblaine’s latest portrayal is especially bizarre and inconsistent this week to boot. After Chillblaine is injured by some apparent thug contacts in his bar, Caitlin patches him up, conveniently placing Chillblaine at S.T.A.R. Labs when the Godspeeds attack. Frost then refuses to allow Chillblaine to help, only to capitulate when the situation gets desperate. Chillblaine then uses this opportunity to tell Frost that life isn’t black-and-white, before insisting that he can’t be talked to like a good guy, since he’s actually a bad guy. So his morality isn’t binary, except when it is, because Chillblaine is a stupid character in a forced Frost relationship subplot that The Flash really doesn’t need!

Caitlin even pulls double duty as S.T.A.R. Labs’ resident physician this week, also taking it upon herself to try and fix Esperanza/Ultraviolet. Again, the Godspeed attack complicates this, since Esperanza can’t be moved while Caitlin is operating on her, but if you thought there would be actual tension here, you would be wrong. Even when Caitlin discovers that Esperanza’s life is being threatened by Black Hole tampering, this amounts to exactly nothing, particularly when Cecile just uses her mental powers to seemingly calm Esperanza’s mask into not killing her? Again, what the hell? What was with the storytelling this week?! Why even bring up Black Hole putting contingency technology in Esperanza’s mask if it’s not going to matter anyway?!

Like I said though, it’s true that this first Godspeed army attack is worth the wait, especially when it finally contributes some surprisingly rare action to The Flash’s current season. I don’t know if this is a COVID-19 issue or what, but for some reason, it feels like this season of The Flash has been strangely starved for exciting action scenes. Fortunately, an attack on S.T.A.R. Labs by six Godspeeds helps to rectify this, as Barry, Frost and Chillblaine try to repel them, while Chester makes an effort to confuse their modem speak, even if this doesn’t ultimately pan out. I assume that Chester will get blamed for this entire Godspeed incident later, because Team Flash seems to love harassing Chester lately.

In all seriousness though, the ultimate climax of this Godspeed attack is even more exciting than the attack itself, because it represents a legitimately cool new hook for this previously underdeveloped arch-villain. After an effectively tense attack at S.T.A.R. Labs proper, Barry lures the six Godspeeds out onto the streets of Central City, at which point they begin to drain his speed. Fortunately, no more stubborn CW cost-cutting is ultimately allowed to happen though, as six more Godspeeds appear, and attack the initial six Godspeeds, before all of them disappear. This is another confusing story turn, but this confusing story turn is actually intriguing and well-presented. It reveals that the Godspeeds are not actually all in unity with one another, and that something of a ‘civil war’ appears to be going on between them. This finally gives the Arrowverse’s Godspeed a great hook that firmly separates him (them?) from this show’s other evil speedsters, and one that also promises to leave all of Central City in its potentially deadly crossfire! 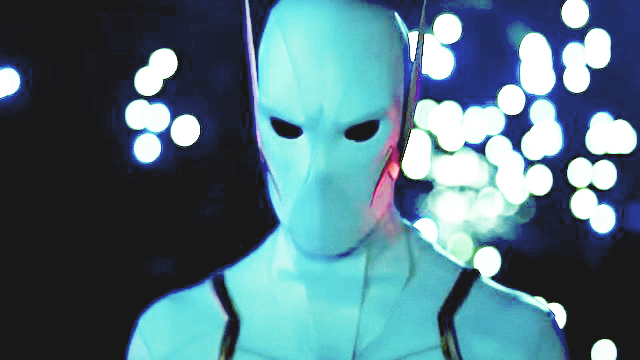 “Enemy at the Gates” may present an exciting climax and a great first impression for the first wave of multiple Godspeeds, but its overabundance of ridiculous and/or underdeveloped filler storylines still makes it feel like an ultimately confused episode of The Flash. Esperanza’s surgery is a total non-issue, Joe and Kramer once again get shafted, despite having one of this season’s better subplots, the Chillblaine/Frost relationship subplot continues to be thoroughly terrible, and shock of shocks, Barry discovers towards the end of this episode that Iris isn’t pregnant. Then Barry acts as if Iris can never be pregnant, because I guess the public school system failed Barry pretty badly. He knows he can keep trying, right? Pregnancy is an, “If at first you don’t succeeed” situation, after all.

At least we have a much more exciting Godspeed battle to look forward to throughout the rest of this season though. Even if it does end up spilling into next season, we don’t have an exact total for exactly how many Godspeeds may be on the way to fight their war in Central City. At worst, there may not be enough heroes in the Arrowverse to stop them!

The Flash 7.15: "Enemy at the Gates" Review
The Flash suffers from an excessive amount of head-scratching subplots this week, though it does manage to kick off its proper Godspeed arc on an exciting note.
THE GOOD STUFF
THE NOT-SO-GOOD STUFF
2021-06-30
70%Overall Score
Reader Rating: (0 Votes)
0%