Loki had to slog through an awkward bridging episode last week, bringing every key character up to speed on the deception behind the TVA, right as the series prepares to move toward its first season’s climax. After Loki ended up being pruned by Ravonna Renslayer as well, he fortunately wasn’t instantly killed, but instead transferred to The Void, a singularity at the end of time wherein the TVA’s pruned people, objects and aborted timeline ‘junk’ are all simply dropped in an extradimensional landfill. “Journey into Mystery” largely unfolds within this landfill as well, with Loki meeting yet more variants of himself, all while attempting to flee, and eventually defeat, a gargantuan cloud-like creature called Alioth.

Unsurprisingly, Alioth’s origins in Marvel Comics lore are the latest clue that Loki’s first season is meant to be the proper introduction of new arch-villain, Kang the Conquerer to the Marvel Cinematic Universe. Alioth, known as ‘Alioth the Usurper’ in the printed panels, is heavily connected to Kang, beginning with the fact that, in the Marvel Comics Universe, he was accidentally unleashed by Ravonna Renslayer, and later became a supernatural ally to Kang. Similarly, in the case of the MCU, Alioth appears to be the literal, “Guard dog” to Kang’s lair, as also foreshadowed by a re-branded Stark Tower/Avengers Tower in The Void, which is labeled, “Qeng Industries.” In an episode that’s chock full of cool and funny Marvel Easter eggs, Qeng Industries is one of the best, as it’s naturally a front corporation for Kang in Marvel Comics lore.

Overall, Loki became much more fun, amusing and engaging this week, with its fifth and penultimate Season 1 episode significantly ratcheting up the show’s energy, while feeling much more unpredictable and fun throughout, rather than saving all of its best moments for the end like last week. Loki’s new variants are immediately endearing and funny as well, with the silent Alligator Loki being a particular standout, a (supposed) animal variant of Loki that was seemingly arrested and pruned by the TVA for, “Eating the wrong neighbour’s cat.” I’m thrilled to see that Loki has found its bizarre sense of humour again, something that it’s been lacking in certain episodes, especially last week’s.

The variant Loki hook is pursued to even greater effect once the Loki variants all catch each other up on their backstories as well. After Boastful Loki and Kid Loki, the latter of whom is apparently the variants’ leader due to his having successfully killed Thor in his timeline, contribute a few decent jokes, Richard E. Grant’s Classic Loki ends up delivering the most impactful story; He used illusions to fake his death during his timeline’s intro to Avengers: Infinity War, at which point he lived in solitude on another planet for many years, only to be arrested by the TVA once he decided to try and make amends with Thor and what remained of Asgard. This nicely illustrates Loki’s central theme of loops and breaking away from fate, as well as the apparent tragedy of Loki supposedly being unable to escape his destiny as a loser, and a bringer of chaos that simply exists to empower those that are superior to him. 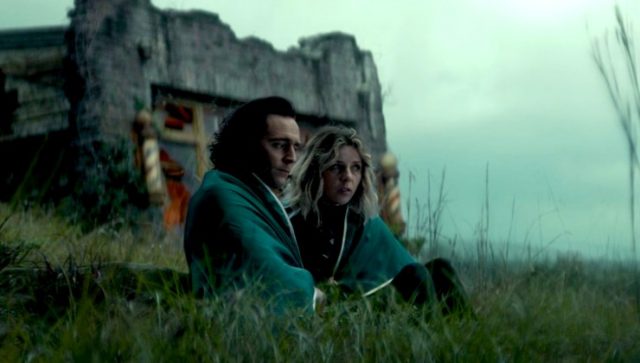 One especially hilarious sequence also occurs around this point, when the MCU’s main Loki variant tries to escape, at which point he’s cornered by a politician-themed version of himself, and more diverse variants. This politician Loki is a very funny nod to 2016’s Vote Loki comic book, which literally involved Loki running to be President of the United States (don’t worry, he lost). In any case though, the many Loki variants all betraying and subsequently fighting each other, including Boastful Loki, provides a perfect opportunity for Loki, Kid Loki, Classic Loki and Alligator Loki to escape, and once again ponder how to take down Alioth, who continues to threaten what remains of their existence.

Around this time, Sophie frustratingly fails to get worthwhile answers from Ravonna Renslayer at the TVA proper, which eventually leads to Sylvie pruning herself, and sending herself to The Void. Admittedly, the TVA sections were the one part of this episode that arguably weren’t necessary, and just slow down the narrative. Ravonna fails to recapture Sylvie, then admits she doesn’t know who is actually in charge of the TVA, then Hunter B-15 says the same thing, and then… That’s it. Like I said, these scenes probably could have been cut, at least those beyond Sylvie banishing herself to The Void, at which point she’s scooped up by Mobius in a pizza delivery car. Yes, thankfully, Mobius did end up in the same Void that Loki did, after they were both pruned last week.

Once Loki and Sylvie are reunited, and Mobius is able to catch up with the other Loki variants (while humourously failing to recognize Alligator Loki), Sylvie resolves to enchant Alioth, which would theoretically open the way to the true mastermind behind the TVA. This kicks off an exciting climax for this episode, one that beautifully sets the stage for next week’s season finale, as Mobius uses a TemPad to return to the TVA, while the other Loki variants decide to remain in The Void, and Sylvie tries to help Loki realize his potential for enchantment. This week’s climax also takes a wonderfully bittersweet turn when Alioth initially proves too powerful for Loki and Sylvie to enchant together, at which point Classic Loki reappears and conjures an illusion of Asgard to distract Alioth. This leads to Classic Loki ultimately sacrificing his life, with the triumphant declaration of, “Glorious purpose!”, as Loki and Sylvie finally manage to use their magic to subdue Alioth, thus opening the way to a mysterious castle-like setting as this episode ends. As much as it’s disappointing that we got very little of Richard E. Grant in the MCU, his one-off turn as Classic Loki still provides a perfect mix of sardonic comedy, original comic book reverence, and, indeed, glorious purpose!

It would seem that Loki is finally back on track with, “Journey into Mystery” this week, a highly entertaining episode that restores much of the show’s eccentric creativity and off-the-wall humour, while also serving as an excellent foundation for next week’s season finale. The other Loki variants in The Void proved to be a lot of fun, and the final steps in the journey to discovering who is actually behind the TVA in the MCU are both engaging and meaningful. It’s a bit annoying that Ravonna Renslayer and the TVA in general didn’t have much to do but ponder who their true boss is this week, but fortunately, that’s a pretty minor quibble in this case. With Mobius returning to confront the organization he no longer trusts however, and Loki and Sylvie both taking their own path to meeting the, “Man behind the curtain”, Loki is poised to give us the answers to our remaining questions next week, as we no doubt meet the next Thanos-level threat to face the MCU at large.

Loki 1.5: "Journey into Mystery" Review
Loki bounces back with an exceptionally entertaining trip to The Void this week, as Loki meets several more variants of himself at the end of time.
THE GOOD STUFF
THE NOT-SO-GOOD STUFF
2021-07-09
86%Overall Score
Reader Rating: (0 Votes)
0%