NOTE: Full spoilers for this episode of, “Loki”, including the identity of who runs the TVA, are present in this review

Loki and Sylvie experience a major watershed moment during this week’s Season 1 finale for Loki, with Marvel Studios’ latest Disney+ Original series finally bringing its eponymous character and his female variant to the doorstep of whomever is actually behind the specter of the TVA. “For All Time. Always.” is an exposition-heavy episode that’s packed to the gills with big reveals, one that once again changes our perception of everything that’s happened so far, and will happen next, within the Marvel Cinematic Universe. This dialogue-heavy offering and its massive implications may be a little dry and overwhelming for some viewers, but for Marvel fans and MCU enthusiasts in particular, this first season finale for Loki is a highly rewarding finisher to one of the MCU’s most unique and ambitious projects to date, at least in its current form.

Yes, as previously reported by various scoopers, Loki will be getting a second season, something that the end of this episode bluntly announces in lieu of a traditional MCU post-credits scene. That news feels especially exciting when one witnesses how the show’s Season 1 finale unfolds, which will not only have massive ramifications for Loki’s character, but for the MCU as a whole! In fact, as just about any Marvel loyalist could easily predict, this season finale finally throws open the floodgates to the Marvel Cinematic Multiverse, potentially inviting not just alternate realities based on existing MCU sensibilities, but also potential alternate realities that could link legacy Marvel movies and TV shows, such as 20th Century Studios’ former X-Men movies or Sony Pictures’ self-contained Spider-Man movie franchises, to the MCU as their own adjacent canon!

That prospect alone is incredibly exciting, but that’s not the only riveting bit of progression in this season finale, not by a longshot! After Loki and Sylvie finally step into the ‘Citadel at the End of Time’, and are given one last temptation to turn back by an extra menacing Miss Minutes, they finally meet the man behind the TVA’s curtain. It turns out that many Marvel fans were bang on the money with their theories as well, because, as frequently predicted, the TVA’s true mastermind is Kang the Conquerer, making his MCU debut here! Well, a variant of Kang the Conquerer, more accurately. We already knew that Lovecraft Country’s Jonathan Majors would be portraying Kang in the MCU soon, but his first reported appearance as the Marvel arch-villain was supposedly planned for 2023 movie, Ant-Man and The Wasp: Quantumania, making Majors’ actual debut as Kang in Loki a very cool surprise!

Much like his Marvel Comics counterpart, Kang, only referred to at this point as, “He Who Remains” (essentially making the MCU’s first Kang variant an amalgamation of Marvel Comics’ “He Who Remains”, the last surviving agent of the printed panels’ TVA at the End of Time, and Kang’s older, more benevolent incarnation from Marvel Comics lore, Immortus), is a 31st Century scientist that sought to master time and space. There is a bit of an inspired twist in his MCU incarnation however, with ‘He Who Remains’ never wanting to dominate the timeline, but merely wanting to seek higher knowledge from his parallel universe selves. Despite many Kang variants wanting to genuinely and peacefully improve each other’s universes with their individual science and technological advancement however, other Kang variants wanted to conquer these alternate realities, which is what started the original multiversal war that the TVA has been going on about. He Who Remains eventually put a stop to this war between his infinite selves, but the consequence of this was that he had to prune alternate branches in time, to prevent his more evil doppelgangers from returning, and waging war on the MCU’s ‘Sacred Timeline’.

It’s pretty crazy, and it can be a lot to digest, even if Marvel Comics enthusiasts will probably not find He Who Remains’ backstory to be difficult to grasp. In any case, alongside this staggering revelation to Loki and Sylvie, He Who Remains also reveals that he actually orchestrated every step they took to make it to the End of Time, and that he did so in order to make them an offer; Take over the TVA themselves, and continue the work of He Who Remains, essentially allowing him to retire from his role as head of the TVA, or kill He Who Remains, which would free up the timeline and effectively grant free will to all of existence, but the resulting cost would see evil Kang variants once again infesting all of time and various alternate realities.

This fateful decision is loaded with delicious irony, because it finally presents Loki with the opportunity to break free from his fate, and take his throne on a grander scale than even Asgard would imagine! Sylvie even distrusts Loki when he claims that killing He Who Remains is the wrong decision, since she believes that Loki only covets power. In reality though, Loki appears to have matured enough to understand that power won’t make him happy, tragically falling victim to Sylvie in the process, who is still motivated by anger and hatred toward her TVA oppressors. After a brief, emotional scuffle, Loki and Sylvie then share a kiss for the first time (make of this chaotic variant romance what you will), though this merely leads to Sylvie kicking Loki back to the TVA, and closing the portal behind him. Sylvie then follows through with her threat, and stabs He Who Remains with her blade, effectively unleashing the Marvel Multiverse on the MCU, as He Who Remains smiles and gives her another creepy warning; “See you soon!” 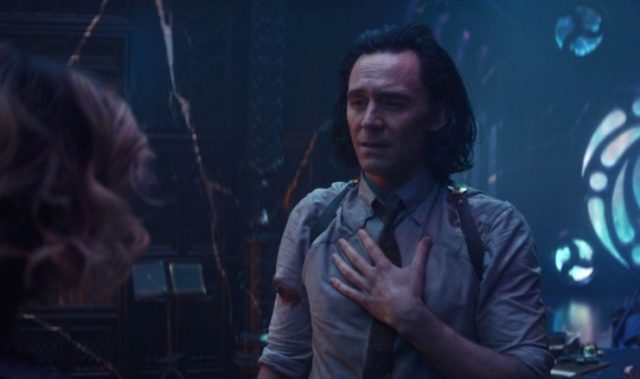 Again, while Sylvie can’t fully wrap her head around what she’s done, Marvel fans know damn well what unleashing the multiverse will mean. Suddenly, the MCU has been essentially reborn as the ‘MCM’, the ‘Marvel Cinematic Multiverse’, with an infinite number of alternate realities creating an infinite amount of Kang variants, among other eldritch threats, that can keep threatening the newly-unbound MCU forever. Not only that, but as I mentioned, this creates the ideal scenario to reconcile and clean house with Marvel’s former live-action content, including legacy movies from third-party studios that aren’t Disney, Sony’s own third-party ‘Sony Pictures Universe of Marvel Characters’ that was launched with their 2018 movie, Venom, and potentially whichever Marvel Television shows that the MCU no longer wants to be part of its main canon. Basically, if Kevin Feige and Marvel Studios no longer want to recognize the events of ABC’s Agents of S.H.I.E.L.D. series, or Netflix’s various MCU dramas like Daredevil and its ilk, or other less-connected Marvel Television shows that still ostensibly operate in the MCU, like Hulu’s Runaways or Freeform’s Cloak & Dagger, they can simply drop them into one of the innumerable alternate MCU timelines that Sylvie just opened up by killing He Who Remains, and removing the TVA’s grip on time and space.

There’s naturally tons to ponder in the wake of the myriad possibilities that have just been opened up for Marvel Studios and Disney, as well as Sony Pictures to some extent. Even after Sylvie’s highly controversial decision however, one that pretty much unleashes a new Thanos-level threat on the MCU, this season finale still packs in a subplot with Mobius and Ravonna Renslayer, in the TVA offices itself. This subplot’s questions aren’t properly answered at this point, though they do set up a tantalizing foundation for Loki’s newly-confirmed second season. Essentially, after failing to reason with Ravonna Renslayer, who instead departs to, “Look for free will”, it’s also revealed by Hunter B-15 that Renslayer has a variant in 2018-era Boston, one that appears to work for a high school. Most pressing of all however is the point when Loki finally tries to explain the dire situation behind He Who Remains to Mobius, only to be taken aback when Mobius and Hunter B-15 no longer recognize him. Worse still is that the TVA’s former statue of the Time-Keepers has now been replaced by one single statue of Kang, suggesting that Sylvie’s killing of He Who Remains has already done irreparable damage to the TVA, and has already changed the foundation of the MCU’s reality in ways we can’t yet fathom.

If you don’t mind the extra heavy exposition throughout its runtime, “For All Time. Always.” is otherwise a superb season finale for Loki, excellently rewarding the series’ many reality-bending turns, as well as its dramatic character journey for both Loki and Sylvie. It felt inevitable that Loki’s and Sylvie’s confrontation with ‘He Who Remains’/Kang the Conquerer at the End of Time could only really end one way, with the unleashing of the multiverse, thus setting up a hugely exciting new status quo for the MCU, but the philosophical conversation that Loki and Sylvie have with the man that’s essentially the one true god of their universe is nonetheless plenty of fun and surprisingly thought-provoking. The existential drama at the heart of Loki achieves something of a crescendo after its titular villain is finally offered a true chance at escaping the tragic loop of his existence, and yet this series still feels primed to keep building momentum during its sophomore season to come.

Loki’s journey may have been occasionally bumpy, especially around its midpoint, but the destination was definitely worth it. Jonathan Majors makes an excellent first impression as the MCU’s next big bad as well, and that’s good, because the MCU’s timeline is now full of him, setting up a limitless, unpredictable obstacle that makes even Thanos feel like bush league!

Loki Season 1 Finale: "For All Time. Always." Review
Loki concludes its first season with an exposition-heavy, but nonetheless superb season finale this week, as Loki and Sylvie confront the true mastermind behind the TVA.
THE GOOD STUFF
THE NOT-SO-GOOD STUFF
2021-07-18
94%Overall Score
Reader Rating: (0 Votes)
0%