It’s been a very unwelcome gap between the first and second halves of Lucifer’s penultimate fifth season. Originally planned to be the show’s final season, Season 5 of Lucifer was split into two eight-episode halves for its release on Netflix, and thanks to continued production complications caused by the COVID-19 pandemic, this fan-favourite DC Comics-inspired procedural took nearly an entire year to finally push out the remaining eight episodes of Season 5. Fortunately, this extended delay also places Part 2 of Season 5 very close to the release of Lucifer’s sixth and (actual) final season, so these eight penultimate episodes still manage to carry a decent amount of finality for enduring fans of Earth-666’s crime-busting Devil.

Another bit of good news surrounding Part 2 of Lucifer’s fifth season is that it’s a considerable improvement over the more uneven first half to Season 5. With the long-awaited introduction to God Himself finally occurring from the jump, played by 24 alum, Dennis Haysbert (ironically reuniting with Amenadiel actor, D.B. Woodside here, another 24 veteran), the rest of Lucifer’s dysfunctional Celestial family officially comes together, and with it the start of Lucifer’s overall climax. Of course, even with the Celestial stakes being higher than ever following God’s visit to the mortal plane, Lucifer still doesn’t neglect its procedural side, offering more LAPD shenanigans, murder and mayhem during Season 5’s back half, even though this season does eventually culminate in a fight for the fate of the universe itself. 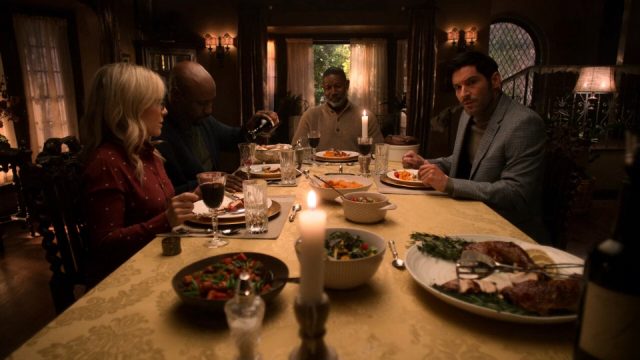 One major improvement during Season 5’s back half is a better, more consistent sense of creative ambition. This season’s front half was often dragged down by an over-emphasis on fan-baiting soap opera elements, especially when it came to the sometimes shaky appeal behind the core Lucifer/Chloe romance. This star-crossed love story initially dipped a little too far into CW territory during Season 5’s front half, as did Ella’s own struggle with relationship inadequacy, but the back half of Season 5 manages to make the Lucifer/Chloe relationship in particular work much more consistently and effectively. Of course, it also helps that Ella’s drama has taken it down several notches during Season 5’s back half to boot, becoming generally more tasteful and adult in tone, which makes it far more palatable for mature viewers.

That being said, there are still a few points where Lucifer’s penultimate season can get a little too corny during its back half. Maze’s newfound obsession with finding a soul is still a little difficult to take in high doses, for example, because it still relies too much on over-the-top melodrama surrounding a character that the writing doesn’t seem to know how to properly utilize throughout much of these eight episodes. Likewise, the storyline surrounding Amenadiel’s and Linda’s baby continues to feel tired, even if the two are now at peace with the fact that their baby is not in any way Celestial. Oh, and Linda’s sudden twist of having given up a baby during her adolescent years also comes back into play during one of the murder cases in these eight episodes, though to be honest, its eventual resolution manages to work a lot better than its initial setup did.

Speaking of things that work better during Season 5’s back half, this is definitely true for most of its LAPD murder cases. Some of the murder cases in Season 5’s back half are still better than others, but overall, they’re noticeably improved over those in Season 5’s front half. A big part of this is due to how much more creative and memorable these eight latest Lucifer episodes are. An obvious highlight on this note is the much-touted musical episode, which is a karaoke-tinged delight, one that continues to make standout musical episodes a strange, but genuinely valid flex for several of DC’s TV shows. Another major boon behind Lucifer’s latest murder cases is how well they experiment with the show’s supporting cast as well. A second highlight offering on this note is a Dan-focused episode that sees the so-called, “Detective Douche” enduring the worst day of his life after a prisoner transport gone bad, one with a final resolution that’s so shockingly tasteless that you can’t help but laugh.

As fun as most of the new murder cases are though, the introduction to Haysbert’s God remains one of the biggest draws behind Season 5’s back half. Better still is that the coming of God allows these eight episodes to mostly function without an over-arching antagonist, further allowing the familiar lead characters of Lucifer to explore more morally grey territory than they ever have before. Much like this universe’s Devil, Haysbert’s God also doesn’t follow the narrative path that you would expect either. There’s a lot of creative subversion surrounding God’s introduction that works very well here, even if the show’s narrative must inevitably shift back to Lucifer’s and Michael’s angelic rivalry eventually.

As much as the ending of Season 5 can be a bit predictable in concept however, there are still some very big swings taken during this season’s climactic episodes. One of the biggest and best swings in fact irrevocably alters the series’ lead ensemble, while also pushing every performance to some extraordinary new dramatic heights. As much as Lucifer and Michael must inevitably come to blows in an epic showdown, one that was clearly originally meant to serve as the backdrop to Lucifer’s series finale (before the show retroactively added a sixth season to host its final episodes), Lucifer himself still faces some very unique challenges throughout the rest of Season 5, as he finally gets a chance to directly confront his father about his supposed sleights throughout millennia. Like I said, this Lucifer/God confrontation doesn’t quite unfold exactly as you would imagine either, and that makes it very exciting to finally see unfold.

In fact, as much as many of us have come to love this oddball supernatural/procedural/dramedy hybrid, one that still has practically nothing to do with the DC comic books that inspired it, I’m actually a little ambivalent about the idea of Lucifer stretching itself to a sixth season, personally. Season 5’s progression and eventual conclusion feels like a superb note to end the series on, one that ties up all ongoing story arcs rather nicely, while leaving the lead characters in some promising new positions. Regardless, the original plan to make Season 5 the end of Lucifer was ultimately changed, and this means that the series will have to try and top an ending that already feels perfectly satisfying in Season 6. It’s not impossible, but it does feel like an unnecessary gamble, especially while Lucifer continues to forsake its source comics in favour of original storylines that are starting to quickly feel tapped out in terms of their potential conflicts.

It must nonetheless be emphasized however that Season 5’s back half, even if it’s quite late, still represents the strongest Lucifer episodes that Netflix has produced to date. The back half of Season 5 is considerably improved over the front half, and while there’s still some excessively soapy elements and a couple of less satisfying LAPD cases, Lucifer’s core appeal continues to shine, even as the series is quite clearly approaching the finish line. There’s a better balance between smarter storytelling and fan-oriented payoffs here, and one can only hope that Lucifer’s imminently-releasing final season can keep up this strong narrative momentum. The retroactive Season 6 addition does feel a bit like a needless double-or-nothing scenario that may not necessarily pan out for Lucifer in the end, but even if that true final season is ultimately a hat on a hat, Lucifer’s Netflix run has never been better, so I suppose the Devil still ultimately got his streaming due.