Truthfully speaking, I’ve always been a bit of a black sheep in my family. While everyone else seems to enjoy being outdoors, doing yard work, or going fishing or hunting, I’m a video game geek who prefers to stay indoors. I value time spent on computers, or with a controller in my hand, over days spent outdoors. That doesn’t mean I don’t like going outside — I just don’t enjoy spending most of my time out there.

This is part of the reason why my family never invested in top end computers, and didn’t have the Internet until after my friends had discovered it at their homes. Our computers were pretty basic builds, and could never run much in the way of modern gaming, although I did get to play Duke Nukem 3D and some choppy NHL games. I always preferred playing on console, anyway, so I wasn’t too disappointed about not being able to run most PC games, or the fact that DOOM 3 was barely playable on low settings. Console games were more interesting, more accessible, less frustrating to install and deal with, and suited me best.

All of the above is a long way around saying that I didn’t play many PC games, and wasn’t that into certain genres that performed best on PC, like RTS or point-and-click RPGs like Diablo. When I borrowed a PlayStation and rented the first Diablo, I was very bored and confused, and likely too young for it. Meanwhile, whenever I’d go over to my friend’s house and watch his younger brothers obsess about Diablo II after the dawn of the millennium, my interest was never really piqued. It just wasn’t for me. 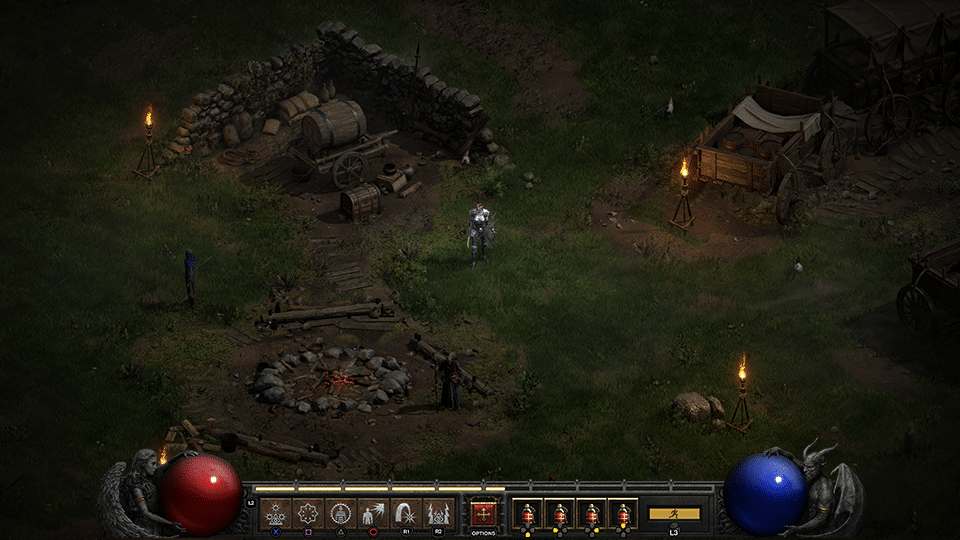 Truthfully speaking, it wasn’t until the release of Diablo III on consoles that I really got into the series. Although I’ll still stand by preferring the first two Torchlight games to it — blasphemy, I know — it hooked me and was quite a bit of fun. Not my favourite game ever made, but something that opened my eyes to why people love the series.

Blizzard was nice enough to send me a code to unlock Diablo II: Resurrected last week, allowing me to go hands-on with the beloved classic for perhaps the first time ever. Although I wasn’t interested the first time around, when they announced that it was, in fact, returning, I got excited. Now, after playing it for the first time, I’m here to share my thoughts and tell you why this particular re-release is worth your time and money. Which it definitely is.

Originally released on June 29th, 2000, Diablo II gave a lot of people reason to stay indoors that summer. Mixing gothic design with dark, intensive, addictive and rewarding point-and-click RPG-ing, it hooked millions and became one of the most popular games of all time. 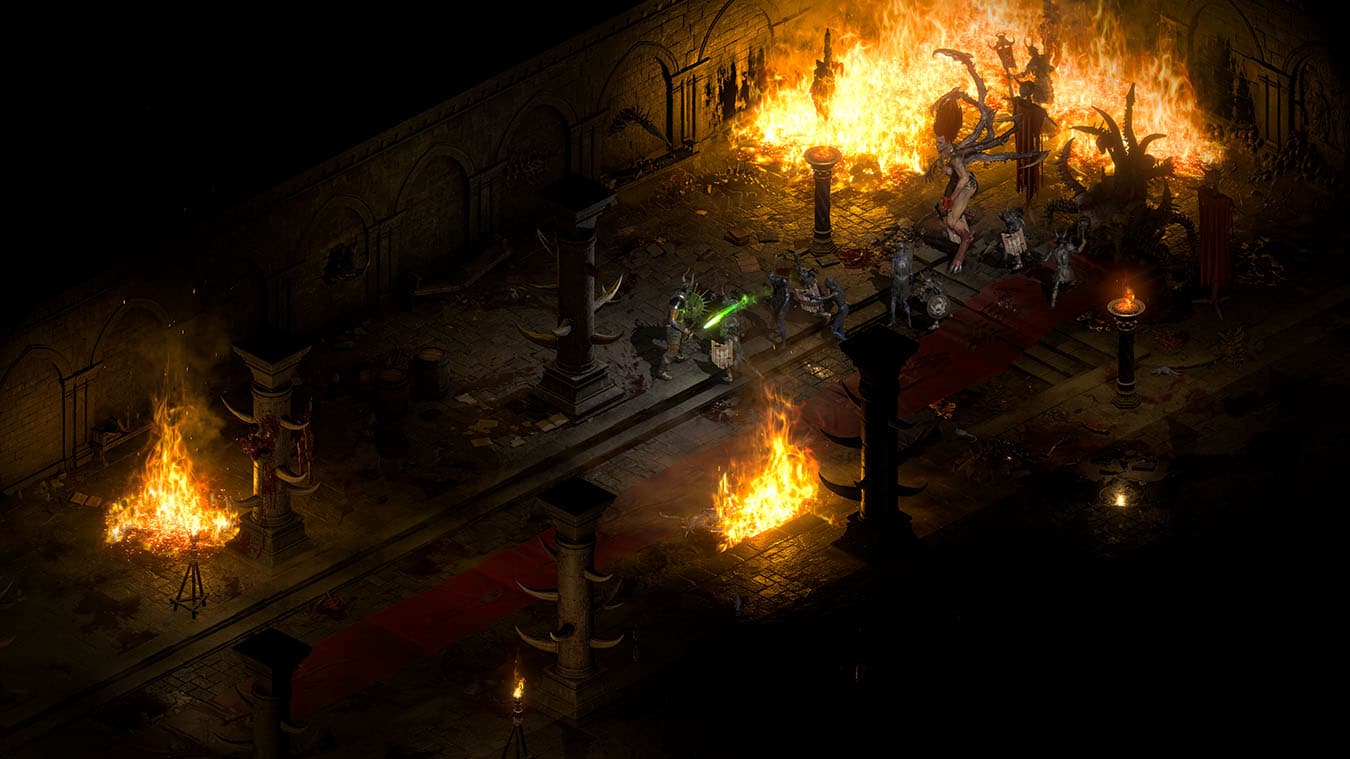 The original version of Diablo II contained four acts, which have all been improved upon for Resurrected, as well as a fifth one that came into play when the expansion, Lord of Destruction, released in June, 2001. All of that action is included herein, allowing for a rather lengthy campaign that should take you over thirty hours to complete by your lonesome or with friends. After all, most feel that these games require co-op, although I feel differently and prefer to go it alone most of the time.

While the story isn’t what brings people to Diablo II, or causes them to fuss over the game, it’s still important like always.

Things begin with a beautiful cutscene, showing a jailed old man who’s visited by a dark wanderer, who’s spreading evil wherever he travels. The story is narrated by this incredibly detailed and well animated elder statesman, who goes by the name Marius, as he follows that dark wanderer out of the jail and into the world at large.

Following the above, the player once again awakens in this world of Sanctuary, as a created character chosen from a number of classes, such as the Barbarian (me), the Amazon, the Druid, the Sorceress, the Paladin or the Assassin. They’ll do this inside of a Rogue camp, where a group of nomads has set up and prepared for both exploration and attack. You see, the nearby lands, forests, caverns, basements, jails, cemeteries and what have you are all overrun by demons and deranged animals. Leaving the safety of camp would be a death sentence for the unprepared.

The meat of this experience, though, is of course the gameplay, which is deep and involved. Not to mention challenging, even on normal. Those with interest can use and unlock additional modes and difficulties, though, including a hellish nightmare mode where the player’s character is permanently deleted when slain. That’s not for me, though.

To be honest, the first part of the game was both fun and overwhelming, and those feelings haven’t exactly dissipated. When I first died, I was pissed that almost all of my equipped weapons, armor and inventory disappeared. It wasn’t until after my second death, when I found my fallen corpse and realized that I could pick up what I’d dropped after dying, that I understood what the hell was happening. At first, I’d thought this was some sort of awful roguelike thing.

The core gameplay loop of Diablo II: Resurrected is fun and addicting, though, not to mention oddly mesmerizing. I never thought I would enjoy such a game so much, because even in its updated state this is still a dated feeling experience. I do, though, and didn’t have trouble losing five hours to it the first time I played. After some original frustration, things were good. It was still difficult, but I learned and improved.

To hell with the enemies that keep casting blue slowdown spells on me, though! You’re the bane of my existence within this digital and demonic realm.

Of course, more than twenty years have passed since this game first caused people to call in sick from work and, eventually, school. In those two decades gaming has seen tons of advancements, including the full realization of online play, digital downloads and high-definition resolutions. It also goes without saying that games both look and play a lot better now than they did in the late 90s and early 2000s.

Thankfully, Blizzard took good care with Diablo II: Resurrected, and has released an updated version of the game that longtime fans should appreciate. Although it incorporates some changes, much is still the same, and those with interest can toggle back to the original visuals and animations if they so choose.

Resurrected introduces console play, auto loot allowing player characters to pick up gold without needing to be prompted, the ability to incorporate a save from the original PC version and that aforementioned retro visuals mode. Its new look features 3D graphics, 7.1 sound, 4K resolution, a higher refresh rate. improved animations and a world of Sanctuary that generally looks quite a bit nicer. Still, this isn’t a full remake or something that is expected to look new or modern. Diablo II is an older game and Diablo II: Resurrected kind of still looks and plays like that, which allows it to remain true to form.

To be honest, I expected a more modern feeling experience and was a bit worried when I first booted this thing up on PlayStation 5. However, I quickly grew to like and enjoy the retro aesthetic, and understood why they didn’t change things up too much. Then again, the new shared stash feature will surely be a big change for those who’ve sunk hundreds or thousands of hours into the original game. It just gives a newbie like me more storage space.

Although I’m new to this experience, I respect its roots and its history, and remember how much my friend and his brothers liked it way back when, during better days. Diablo II: Resurrected may be my first time playing through this classic game, but many will be returning to this release with high hopes. In my opinion, Blizzard has done a very good job of bringing this hack n’ slash experience to modern devices, while keeping what made it so beloved in place.

This still isn’t my favourite game in its genre, but it’s a good one nonethless, and I appreciate being able to play such a classic for the first time. Perhaps some more quality of life improvements could’ve helped, though.

With all that said and done, don’t hesitate to pick this one up if you’re on the fence. There’s a lot of bang for your buck, and Blizzard’s efforts show through.

This review is based on the PlayStation 5 version of the game, which we were provided with.

Diablo II: Resurrected Review
Diablo II: Resurrected has revived a decades old classic, which many consider to be one of the greatest video games ever made. Blizzard has done a good job, and poured a lot of love into this one, making it an easy pick up if you're into this kind of game.
Visuals84%
Audio81%
Gameplay85%
Storyline80%
The Good Stuff
The Not-So-Good Stuff
2021-10-01
83%Overall Score
Reader Rating: (0 Votes)
0%