With the Commonwealth presumably rallying their forces to move toward Alexandria, it’s understandable and a bit disappointing that they entirely sat out The Walking Dead’s final episode of 2021. Instead, “For Blood” largely revolves around wrapping up the show’s rather dull Reaper storyline, which, in hindsight, simply feels like an intrusive tease for the in-development Daryl/Carol spin-off series that AMC is supposedly premiering in 2023, the following year after this show comes to a conclusion. We did get an occasionally thrilling subplot in Alexandria to compensate, but unfortunately, The Walking Dead’s final bow for 2021 proved to be rather underwhelming.

In having to focus so heavily on the Reapers, you can imagine that this episode constantly drags, and boy does it ever! I get the idea of a slow burn that eventually erupts into a full-on walker invasion for Pope’s settlement, but since we already know Maggie’s and Negan’s big plan to take revenge for the Wardens, there isn’t much left for the Reapers to do but bumble around and gawk at the nearby walker herd. Oh, and there’s some more questioning of Daryl’s allegiance, but again, there’s just no suspense there. There never really was. We already know that Daryl is a mole, we already know that Daryl can’t die, because he has a spin-off series seemingly coming in 2023 (further begging the question as to why AMC blabbed the existence of this potential series several years early), and we already know that the Commonwealth is the true threat of The Walking Dead’s final season, something that quickly leaves the Reapers as an afterthought.

So, after all that effort to maintain his cover, what does Daryl’s treachery amount to? Well, disappointingly little in the end. Daryl makes the very bold call to tell Leah that he’s secretly working with Maggie, once Pope determines that Maggie’s forces are pointing the walkers directly at the Reapers (that’s a hell of a lucky guess, even for a villain as supposedly sharp as Pope!), a revelation that Leah surprisingly barely reacts to, at first. Then, when Pope decides to sacrifice more of his own men through blatantly reckless tactics, because Pope is an idiotic, badly-written villain, Leah decides to stab Pope to death herself, before outing Daryl as a spy to her surviving Reaper companions. This forces Daryl to flee. 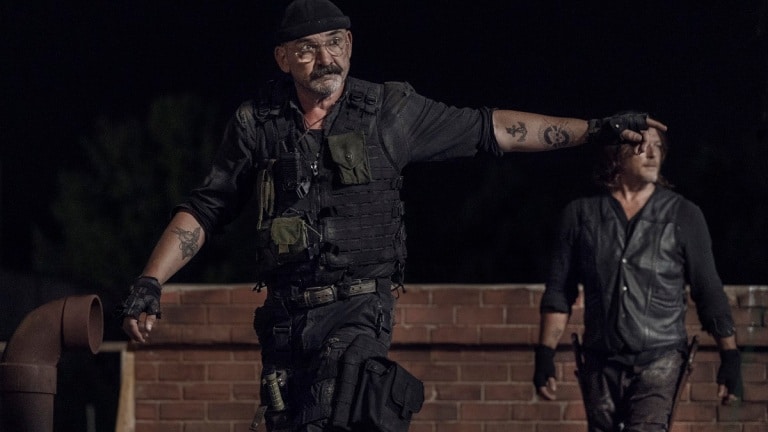 Okay, it’s fairly understandable that Daryl and Leah probably couldn’t achieve a happy ending after all this Reaper business, especially since that would probably disturb AMC’s plans for Daryl’s aforementioned spin-off show. Even so, Leah’s actions feel pretty damn contrived here. Her reasoning of, “Wanting to protect her family” feels like bullshit, with Leah simply alienating Daryl because the plot demands it. From there, Leah points a firecracker-powered hwacha at Maggie and Negan, and fires it, which serves as this episode’s ending cliffhanger. That would be a nicely hair-raising note to end this episode on, if AMC hadn’t immediately ruined the cliffhanger with the subsequent promo for this season’s next eight episodes in early 2022, which quickly reveals that Maggie and Negan survived this attack.

So, the Reaper arc ended the way it started, which is to say, with a pretty palpable whimper. Fortunately, we got a few more decent thrills with the Alexandria subplot here, even if it also ended up floundering a bit in the end. While it lasts though, Alexandria finds itself facing a pretty exciting obstacle in this episode, as a nasty storm starts damaging the village’s rebuilt wall, and the windows of the house that many of Alexandria’s survivors are holed up in. To make matters worse, a fire erupts at one of the windmills, forcing Aaron to take a party to fix it, while Carol decides to take Connie and Kelly to repair the damaged wall, which is quickly giving way to walkers. This leaves Rosita to hold down the fort with Alexandria’s children in a house, alongside the injured Virgil.

We at least get some decent walker action in this subplot, as Rosita’s group struggles to survive. One of the immediate disappointments behind this subplot however is the fact that we never get to see Aaron’s and Carol’s parties. They just go out the door and are never seen again. We do get one pretty badass sequence of Rosita taking out walkers as a one-woman army outside, but this is over quickly, and Rosita isn’t even injured in the process, so this was ultimately pointless. In fact, the only real story turn of consequence within this subplot involves Judith and Gracie being cornered in a flooded basement, after Gracie decides to try and find a weapon to help defend the house. This does feel a little inconvenient for the sake of the plot, but Gracie is a child, and it’s not a leap to have Gracie take Judith’s advice to be brave the wrong way. Thus, perhaps Judith having to defend Gracie from an even stickier situation could be a good way to kick off The Walking Dead again, once the show returns in February.

Like I said though, “For Blood” marked a disappointing end to The Walking Dead’s 2021 run of episodes, especially when we once again had to sideline the Commonwealth in order to wrap up the lesser threat of the Reapers. Pope went down like a chump in the end, acting like a stupid villain that was begging to get stabbed by his underling, while Daryl’s subterfuge largely amounted to nothing, as will Leah’s hwacha attack, a turnout that AMC has already spoiled. Fortunately, the Reapers are likely done and over with now, at least in this show. Alexandria meanwhile delivered a decent, but not great walker attack throughout this episode’s subplot, fueled by a storm, once again setting up an intriguing, if under-utilized people-vs.-nature conflict.

As usual though, The Walking Dead’s increased skittishness with lead character fatalities during its later seasons, even its final season, is continuing to work against it, sucking out much of the potential stakes behind the storytelling. Hopefully, the Commonwealth coming to Alexandria can restore some of those stakes next year, especially while several of Alexandria’s toughest survivors remain separated in the wild for now.

The Walking Dead 11.8: "For Blood" Review
The Walking Dead ends its 2021 run on a disappointingly limp note with, "For Blood", as Maggie makes a final strike against the Reapers, while Alexandria fends off walkers during a deadly storm.
THE GOOD STUFF
THE NOT-SO-GOOD STUFF
2021-10-14
67%Overall Score
Reader Rating: (0 Votes)
0%