I’ll say one thing about departing Doctor Who showrunner, Chris Chibnall; He certainly doesn’t do things halfway! After news broke that both Chibnall and current lead star, Jodie Whittaker would be leaving Doctor Who after the freshly-premiered Series 13 (and some subsequent 2022 specials), it was later confirmed that the entire season would mark a major event that’s unprecedented in New Who; A single serialized narrative would encompass the entire season, rather than Series 13 merely focusing on mostly self-contained adventures for The Doctor and their companion(s), as per usual. Thus, Series 13 of Doctor Who premiered with the subtitle, “Flux”, referencing an apocalyptic event that threatens to destroy the universe itself!

Originally announced to span eight episodes, already another reduction to Chibnall’s shortened ten-episode season count, Doctor Who: Flux has now been further reduced to just six episodes, evidently due to further production complications caused by the COVID-19 pandemic. This might partially inform why Series 13 is suddenly taking on a single season-spanning narrative, something that was attempted a couple of times during the Classic Who era, but not New Who. This season certainly hits the ground running with, “The Halloween Apocalypse” as well, kicking off with an immediately fast-paced narrative that throws you right into the thick of the action. Apparently, The Doctor and Yaz have been quite busy since Graham and Ryan left the TARDIS at the end of Series 12’s final New Years Special from this past January. In fact, whatever mission they’ve been undertaking has left them dangling over an ocean of boiling acid as the season begins, while a mysterious target called Karvanista taunts them!

This is the most intense season intro that Doctor Who has presented in a long time, even if it’s inevitable that The Doctor and Yaz would escape their predicament in style. Amazingly though, this botched mission merely gives way to the cataclysmic coming of the Flux, even if this isn’t determined right away. Instead, we’re quickly introduced to this season’s new companion, Dan Lewis, who almost immediately runs afoul of Karvanista, humourously revealed to be a ‘dog man’ alien called a ‘Lupari’. Dan is a pretty likable, if down-on-his-luck guy, barely making ends meet while strangely masquerading as a museum tour guide, even if he clearly has a good heart and a giving spirit. Beyond that, Dan is completely ordinary, something that Karvanista himself even confirms. So why would Karvanista want anything to do with Dan?

Well, as it turns out, in what’s admittedly a pretty solid, if undeniably weird twist, Karvanista isn’t trying to kidnap Dan; He’s trying to save him! With an armada of seven billion Lupari ships approaching Earth from here, The Doctor and Yaz eventually fumble their way into learning that each ship is piloted by a Lupari that’s assigned to one human on Earth, and they need to bring the humans off of Earth to avoid the Flux. All the while, a mysterious alien prisoner named Swarm escapes confinement and psychically taunts The Doctor, after finding another alien that appears to be his sister. Then, the TARDIS keeps glitching due to unknown circumstances that The Doctor refuses to discuss with Yaz, Sontarans appear to be mobilizing to some unknown end in the far reaches of space, and a spectator on the space outpost, Rose (a cute reference to New Who’s original companion) witnesses the Flux begin to implode planets. Clearly, there’s a big mystery and a bigger threat being kicked off here, and Dan and Karvanista quickly get thrown into both alongside The Doctor and Yaz! 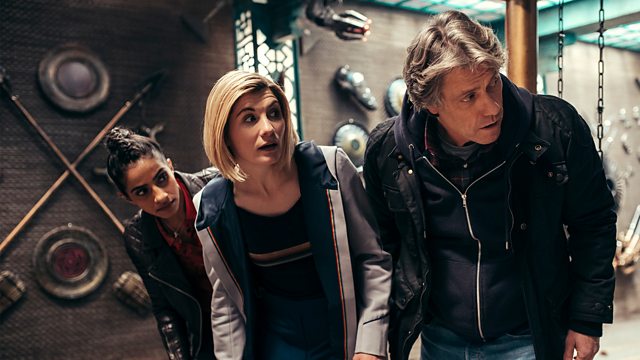 If it seems like the show is moving a mile a minute with these revelations surrounding the Flux and its necessary lore, it’s because it is! In fact, “The Halloween Apocalypse” can hit you with so much lore all at once that it’s genuinely overwhelming, even for some experienced Whovians! I imagine this is by design though. Plus, if you’re among the Doctor Who fans that resent the series’ social justice-fueled narratives throughout Chibnall’s previous two seasons especially, you might at least be happy to know that this season clearly doesn’t have time for that. That being said, there’s way too many details to wrap your head around this early on, with Series 13 no doubt being poised to show how these narrative pieces fit together over the next several weeks.

It’s also rather disappointing that this season premiere, ostensibly a Halloween-themed episode, barely has anything to do with Halloween. Why bother referencing that it’s Halloween then? Normally, when Doctor Who presents a Christmas or New Year’s special, the show manages to make these occasions a significant part of the plot. Outside of some early trick-or-treating moments at Dan’s house though, “The Halloween Apocalypse” ultimately presents a plain old apocalypse. Even by those standards, not much ultimately happens in this episode beyond setup either. The Lupari use their ships to shield Earth from the Flux, and then the TARDIS is seemingly pulled into the Flux during this episode’s final seconds, despite the fact that The Doctor and her companions obviously won’t be killed here, and that’s about all that’s achieved in this episode.

Don’t get me wrong, “The Halloween Apocalypse” is a very exciting start to Series 13. It’s just a bit of a dense season premiere that doesn’t leave quite as much of an impact as it deserved to. I must still respect Chibnall’s efforts to make the most of his final bow with Doctor Who though, even if the Flux mystery is off to a bit of an awkward start from a narrative standpoint. Regardless, this fast-paced season premiere has no shortage of fun mysteries to noodle on, and intriguingly tasks viewers with immediately receiving every puzzle piece that’s bound to become important this season, before inviting fans to draw their own conclusions. This certainly does seem like a fun way to launch Jodie Whittaker’s final episodes as the Thirteenth Doctor, and Chibnall’s final episodes behind the series’ helm, before original New Who showrunner, Russell T. Davies returns to that role for the upcoming Series 14.

I’m also curious to see if Series 13 builds further on the canon-annihilating fallout from Series 12, which turned the entire backstory behind The Doctor on its head. Then again, the universe itself hangs in the balance, so even if we don’t have time to address that at this point, Whittaker and Chibnall are still committed to making their final episodes leave a big impression, if nothing else!

Doctor Who: Flux Series 13 Premiere - "The Halloween Apocalypse" Review
Doctor Who: Flux kicks off the series' thirteenth season with an ambitious season-long narrative that opens with lots of excitement and just as much confusion.
THE GOOD STUFF
THE NOT-SO-GOOD STUFF
2021-11-12
82%Overall Score
Reader Rating: (0 Votes)
0%