NOTE: Some minor spoilers from throughout the first season of, “What If…?” are present in this review

Disney and Marvel Studios are wasting no time after the recent birth of the multiverse within the Marvel Cinematic Universe. In the fallout of Loki’s first season, the training wheels were officially taken off of the MCU’s dimensional barriers, thus inviting entirely different takes on the MCU’s world, where key events play out differently, including the fates of various familiar heroes and villains. All of this is overseen by a brand new MCU tour guide, Uatu the Watcher, a familiar Marvel Comics personality voiced in this series by Jeffrey Wright, who not only serves as the new passive god behind the MCU’s multiverse, but also the vanguard presence for Marvel Studios’ very first animated MCU project.

Following this year’s Disney+ Day, we got confirmation that we can expect more animated projects from Marvel Studios to make their way to Disney+ over the next couple of years, both within and without the MCU, including Spider-Man: Freshman Year, Marvel Zombies and X-Men ’97 as part of the initial wave. What If…? serves as a smart cornerstone to this expanding animated arm of Marvel Studios, as its first season features nine episodes built around MCU storylines that play out in different ways than they did within the MCU’s live-action movie canon. This debut season only covers up to Avengers: Infinity War, mind you, so Avengers: Endgame and Spider-Man: Far From Home aren’t part of the fun for now (neither are the brand new MCU movies from this year, of course), and nor are the initial wave of live-action MCU shows made for Disney+, WandaVision, The Falcon and the Winter Soldier and Loki. The MCU’s Marvel Television catalogue also frustratingly remains ignored here, so if you were hoping to get a multiversal tip-of-the-hat to shows like ABC’s Agents of S.H.I.E.L.D. or Netflix’s Daredevil, you’re similarly out of luck at this point. Even so, the first 21 movies in the MCU catalogue offer plenty of events to reimagine across the first nine episodes of What If…?, even if some of these multiversal musings are inevitably better than others. 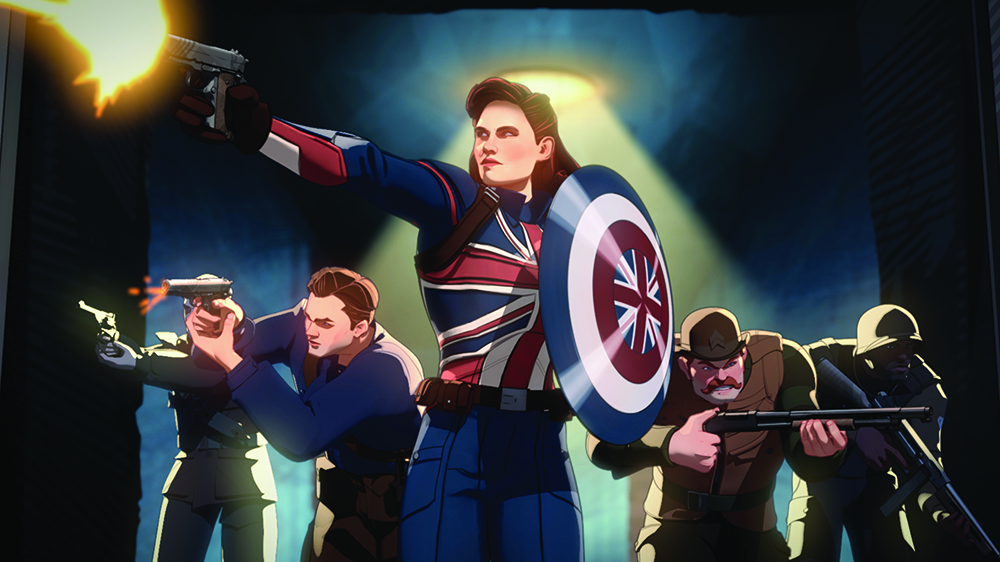 On this note, the first season of What If…? does get off to a bit of an awkward start, despite an initially exciting hook. The very first episode details an alternate universe where Peggy Carter received Captain America’s Super Soldier Serum during WWII, rather than Steve Rogers. This transforms Peggy into an all-new superhero called Captain Carter, complemented by a still-shrimpy Steve that operates a prototype Iron Man-like rig called the Hydra-Stomper. As cool as this idea is in concept however, it largely unfolds with the same plot beats as 2011’s Captain America: The First Avenger, the movie that inspired this storyline, with the one decisive difference being that it’s Peggy’s Captain Carter that’s eventually thrown into the modern era, rather than Steve.

After this bumpy start though, What If…? tends to more consistently tickle the imagination, and flirt with all sorts of exciting prospects throughout the MCU’s growing multiverse. The very next episode proves to be one of the season’s best, in fact, detailing an even more bold universe where Chadwick Boseman’s T’Challa becomes Guardians of the Galaxy leader, Star-Lord, rather than Peter Quill. Not only is Boseman a highlight What If…? performer even in voiceover, with his alternate Star-Lord easily rivaling Chris Pratt’s mainline Star-Lord portrayal in the live-action MCU, but it also marks an especially bittersweet way to cap off the late Boseman’s MCU legacy, even though he’s ironically not voicing Black Panther in this alternate universe. Boseman’s familiar Black Panther persona is still featured during some What If…? storylines, but he’s usually a supporting presence without much bearing on any given episode’s plot. It’s actually Michael B. Jordan’s villain, Erik Stevens/Killmonger that makes a much greater impression as a Black Panther franchise representative in What If…?, one that defies his canonical death in the live-action MCU thanks to the multiverse, where he headlines another highlight episode involving Killmonger saving Tony Stark from the IED that would otherwise kick off Stark’s transformation into Iron Man.

When What If…? commits to bold imagination, the series really does soar. At best, What If…? even helps make up for some underdeveloped MCU events that weren’t ultimately able to achieve their Marvel Comics high notes in the live-action canon. Chief among these disappointments is Ultron, who finally gets his due as a more impactful MCU arch-villain in What If…?, thanks to an alternate universe wherein Ultron successfully entered the body of Vision, and subsequently grabbed all of the Infinity Stones for himself. This Infinity Stone-powered Ultron eventually becomes the over-arching antagonist of the season, namely when he gains cosmic awareness and begins to sense Uatu and the multiverse, eventually forcing Uatu to bring together various alternate MCU heroes like Captain Carter, T’Challa Star-Lord and others in order to protect the multiverse from Ultron. Admittedly, this action-packed end to Season 1 is much lighter on plot and creativity compared to the season’s highlight episodes, but it does certainly conclude this first season with a suitable bang! 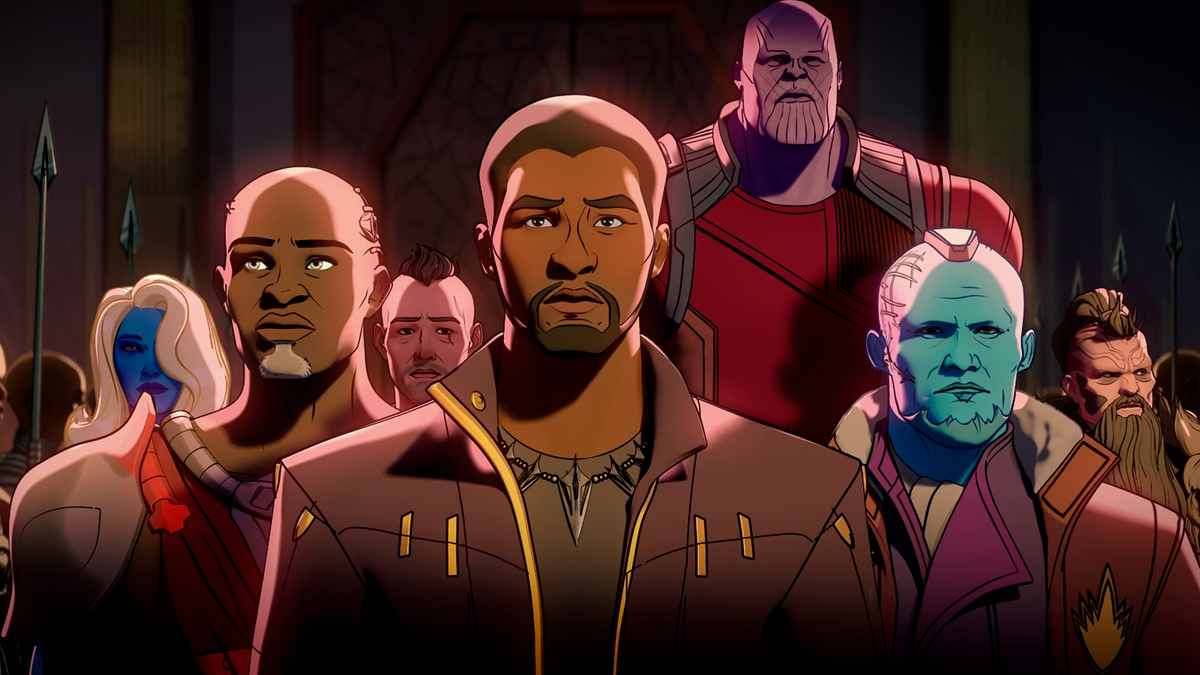 Regarding the animation quality in What If…?, you might not be surprised to hear that it’s pretty good!… Mostly. The unique blend of anatomically correct portraiture and CGI animation is distinct, and provides a good fusion between the MCU’s recognizable live-action portrayals, and a more cartoon-friendly exaggeration, thus restoring some of the comic book flavour that can’t fully translate to the live-action MCU. That being said however, there are also some instances where the character animation can be a little rough. Certain characters like Thor and Happy Hogan for example barely resemble their live-action counterparts, with bizarre proportions and even weirder facial animations. Chris Hemsworth and Jon Favreau at least voice these two respective characters in What If…?, reprising their roles from the live-action MCU, so these off-putting animation elements could be worse, but they are definitely distracting.

This brings me to the soundalikes, a necessary evil for certain familiar MCU personalities in What If…?. Fortunately, the majority of the series’ characters are voiced by their familiar MCU actors, though there are definitely exceptions. Some of the highest-profile MCU heroes, from Iron Man to Captain America to Black Widow to Captain Marvel to Spider-Man, along with most of the Guardians of the Galaxy’s roster, are not in fact voiced by their live-action MCU actors, and while almost every villain is reprised by their familiar MCU performer, Ultron is a notable exception. Why soundalikes were used in certain familiar MCU roles could be due to contract issues, availability issues, or according to Drax the Destroyer actor, Dave Bautista, Disney not even asking certain MCU actors to appear in What If…? for some reason. Regardless, not every MCU performer returns for What If…?, and that can be disappointing.

That is, until you hear some of the live-action MCU actors struggle to perform voiceover. The soundalike impersonations are generally pretty solid, with Lake Bell’s Black Widow and Ross Marquand’s Ultron being particular standouts, especially when they have to headline major storylines while occupying extended roles. In other cases however, the live-action MCU actors can sound downright awkward in voiceover, and strangely unnatural at their worst. This isn’t too common, and indeed some of the live-action performers like Paul Rudd and Benedict Cumberbatch sound just as convincing as their respective Ant-Man and Doctor Strange characters as they do in live-action. In other cases however, the voiceover performances definitely feel… Off. This is especially evident with the more understated character portrayals, which no longer effectively translate to animation, meaning that Benicio del Toro’s Collector and Sebastian Stan’s Winter Soldier for example suddenly sound unnaturally peppy and unconvincing.

Fortunately, the inconsistent voiceover performances can also sometimes work in What If…?’s favour, when it’s drastically redefining how certain MCU characters’ destinies play out. Josh Brolin for example is able to voice a heroic, upbeat version of Thanos as an ally to T’Challa Star-Lord, once again adding cool new dimensions to arguably the MCU’s best arch-villain so far. Likewise, the aforementioned Benedict Cumberbatch is able to tap into a more dark and monstrous turn as an alternate Doctor Strange, one that’s eventually driven mad with power and consumed by darkness during a futile quest to reverse the pre-destined death of his true love, Christine Palmer. The more gimmicky episodes featured during What If…?’s first season, including the previously mentioned Captain Carter episode, and an otherwise fun introduction to an MCU-flavoured Marvel Zombies storyline, don’t tend to be as memorable or clever, but when familiar heroes and villains face new conflicts, and sometimes outright swap moralities, What If…? tends to excel as yet another surprisingly bold MCU-themed series for the Disney+ catalogue.

Best of all is the fact that What If…? was renewed for a second season long before its first season even premiered, with Disney and Marvel Studios also confirming plans to annualize the series for the foreseeable future. Sure, this first season has a few awkward spots, particularly its somewhat uneven animation and voiceover performances, but the series’ central conceit is mostly realized very effectively. Jeffrey Wright’s Uatu works well as both a guide and overseer for the MCU’s new multiverse-driven era, in turn paving the way for an expansion into more experimental animated projects from Marvel Studios in the near future. It’s certainly ambitious to make a series that’s both all about non-canonical MCU revisions alongside being the MCU’s first animated series, but What If…? nonetheless succeeds in both endeavours, ushering in the next groundbreaking era for the MCU in more ways than one!

What If...?: Season 1 Review
The debut season of Marvel's What If...? succeeds as both a first proper showcase for the MCU's multiverse, and the first animated MCU project, despite a few awkward elements in some episodes.
THE GOOD STUFF
THE NOT-SO-GOOD STUFF
2021-11-14
86%Overall Score
Reader Rating: (0 Votes)
0%