NOTE: Full spoilers for this episode of, “Naomi” are present in this review

Even while the Arrowverse continues to soldier on, The CW seems more eager than ever to experiment with self-contained DC shows as of late. Despite all the pomp and circumstance behind the network’s record-shattering five-series Crisis on Infinite Earths crossover event, which merged then-isolated DC shows, Supergirl and Black Lightning into the shared Arrowverse continuity in its aftermath, this was quickly rendered moot by The CW’s subsequent full-time rescue of Stargirl, following its original home, the DC Universe app, being converted into a comics-only platform. With Stargirl taking place on the post-Crisis Earth-2, rather than within the Arrowverse proper, this opened the door for The CW to once again feature isolated DC shows on top of its shared Arrowverse canon, with the network since developing another isolated, non-Arrowverse series, Gotham Knights, from a selection of Batwoman’s creative team.

Before Gotham Knights is ultimately considered for pick-up however, The CW has already greenlit Naomi, another DC drama that doesn’t take place within the Arrowverse. A dual pitch from A Wrinkle in Time writer-director, Ava DuVernay, who formerly tried to develop a New Gods movie for the DC Extended Universe before that was shelved, and successfully got a Vertigo/DC-inspired miniseries, DMZ picked up for HBO Max, as well as former Arrow writer and executive producer, Jill Blankenship, Naomi loosely adapts one of DC Comics’ newest high-profile superheroines. I say ‘loosely’ because Naomi’s source comics extensively draw upon the larger DC Universe and multiverse for many of their story elements. Naomi’s CW adaptation however doesn’t have that advantage, and that’s painfully evident throughout its rather shaky first episode.

As much as Naomi is another win for superhero representation, boasting a Black, female, bisexual lead heroine, it’s also yet another frustrating example of how The CW keeps failing its female-fronted superhero programming. Only Stargirl seems to be an exception to this persistent issue at this point, but bear in mind that Stargirl was originally a DC Universe series, and one that only ended up on The CW due to DC Universe pivoting exclusively to comics. What issue do I speak of specifically? The issue of placing a desire for representation over actual creativity and engagement. Naomi’s writers and showrunners clearly got very excited about presenting a character that represents a simultaneous series of minorities, but didn’t bother to actually come up with a compelling character for her, namely one that doesn’t merely exist to check boxes.

What I’m getting at here is that Naomi, namely the live-action character and her CW series overall, is very boring so far. Kaci Walfall is at least well cast and serves as a solid lead, being charming and easy to like, but that’s part of the problem with The CW’s take on this character. The CW’s Naomi is very over-idealized and sanitized. Everybody likes her, she has multiple boys and girls competing for her love, she has two loving adoptive parents, she’s smart, she’s successful, she’s overflowing with prospects, and she lives in what’s honestly a seemingly pleasant military town. She has no noticeable flaws, struggles or shortcomings, and that makes it impossible to find anything to relate to, because Naomi is starting out perfect, and will probably end this series perfect. Naomi thus falls into the exact same trap that The CW’s eponymous heroines of Supergirl and Batwoman too often fall into; She immediately has nowhere to go as a character, and is simply meant to serve as a plot device within her own story. That’s a bad start, and it only becomes more grating with time, as we’ve seen throughout Supergirl’s six-season run, and Batwoman’s ongoing run. 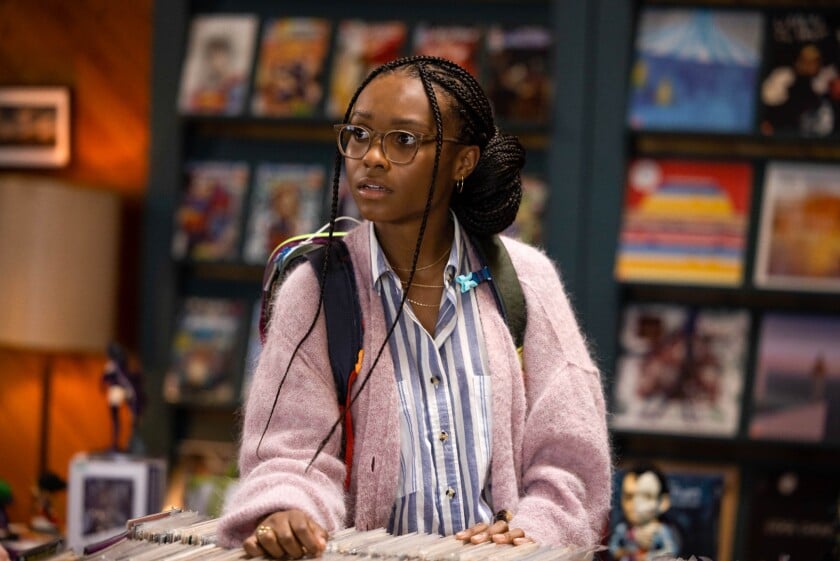 What’s especially irritating about this is that the initial premise behind Naomi is pretty interesting. The show appears to occupy a universe that more or less mirrors our real-world universe. Superheroes are purely fiction in Naomi’s world, and while Naomi supposedly runs the third-biggest Superman fan site in her world, Superman is also not real to anyone that lives in it… Until he is. After Naomi ditches class to witness a mysterious scene in the middle of her hometown of Port Oswego, Oregon, she hears a buzzing and passes out, only to wake up to the supposed sight of Superman flying overhead. Mysteriously, this doesn’t appear to be Tyler Hoechlin’s Arrowverse Superman either, the one currently starring in Superman & Lois. That actually leans nicely into the show’s overall mystery for DC fans, one that logically leaves Naomi hunting for answers about what she and her fellow townsfolk actually saw.

Sadly, from here, the show hits a lot of predictable notes. It also doesn’t help that the plotting unfolds at a snail’s pace. Most of this entire first episode consists of Naomi wandering around and asking questions, without finding any definitive answers. Even among slow burn plots, this is positively lethargic, with things only getting interesting once Naomi confronts Zumbado, a shady car dealer. Zumbado is arguably Naomi’s archenemy in DC Comics lore, and while he appears to demonstrate metahuman abilities after cornering Naomi in the woods later on, he also seems to imply that Naomi is actually the one exhibiting abilities. Once Naomi subsequently takes her friends to break into Zumbado’s car dealership as well, she discovers evidence that appears to suggest she literally fell to Earth on the date of her adoption.

This at least sets up a strong ending portion to what’s otherwise an infuriatingly dull first episode for Naomi. Eventually, it’s revealed that the local tattoo shop owner, Dee knows something about the mysterious circumstances surrounding Naomi’s adoption. At the very end of this premiere episode, it’s then revealed that Dee is a seemingly ageless winged alien, one that appears to share mutual recognition with the mysterious Superman that appeared. If I had to guess, Dee is probably a Thanagarian, a powerful alien race in the DC Universe that are defined by their large wings. DC superheroes, Hawkman and Hawkgirl are often portrayed as being of Thanagarian descent, for example.

This alien twist with Dee could echo a key plot twist from Naomi’s source comics, namely that Naomi is actually from a parallel Earth. In this TV adaptation’s case, Naomi’s home Earth is no doubt one where superheroes and metahumans in general do exist, and she was likely hidden on the powerless Earth she now lives within, due to her own developing metahuman abilities, with Dee being charged to watch over her. I’m not sure if Naomi’s entire backstory from DC Comics lore will be replicated in this CW series, but the material with Dee effectively lends itself to the show’s over-arching mystery regardless, something that currently appears to be the one major story element that Naomi delivered strong out of the gate.

Everything else however needs quite a bit of work. Naomi just reeks too much of being a generic, disposable teen thriller for now. Not helping matters is the show’s romanticized, Mary Sue take on its titular protagonist, a character that’s far more fleshed out and interesting in her DC Comics portrayal. “Don’t Believe Everything You Think” at least manages to layer in enough DC-flavoured intrigue to keep die-hard fans of the Distinguished Competition watching, at least for a little while, but whether it can sustain that interest throughout its debut season is a bigger question. I, personally am intrigued at the show’s interesting decision to separate itself from the Arrowverse for the time being, despite it being developed for The CW from the get-go, unlike its equally isolated cousin series, Stargirl. This series does need to ground its protagonist and better find its voice though, rather than feeding viewers more tired CW platitudes that only do a disservice to the representation that Naomi wants so desperately to promote.

Naomi Series Premiere: "Don't Believe Everything You Think" Review
Naomi's first episode is sluggish and generic, with only a somewhat intriguing mystery left to elevate this watered-down CW portrayal for one of DC Comics' freshest and most interesting new characters.
THE GOOD STUFF
THE NOT-SO-GOOD STUFF
2022-01-26
62%Overall Score
Reader Rating: (0 Votes)
0%