It seems like The Walking Dead has been looking for an excuse to start an inevitable conflict between the Commonwealth and the show’s established survivor protagonists, and we might be seeing the spark of that conflict begin to ignite in the series’ latest episode. “Warlords” sees Lance Hornsby’s mysterious agenda for Commonwealth expansion take a new turn, after Aaron and Gabriel are taken along on an outreach mission under Commonwealth superior, Toby Carlson. This outreach mission also ends in disaster, naturally, as first teased after a dying messenger reports to Hilltop that their community is in distress, prompting Maggie, Lydia and Elijah to investigate.

We’re smack in the middle of The Walking Dead’s extended final season at this point, and it’s definitely starting to feel like it. “Warlords” is another filler episode that largely exists to set up future conflicts, and it’s even more obvious about this than the previous episode. The series’ writers appear to want to get around this issue by giving this episode an unpredictable air of mystery as well, complete with a series of flashbacks that try to construct something of a conundrum surrounding what happened on the Commonwealth’s latest mission. Except, it’s not much of a conundrum in the end, because almost every twist in this episode is incredibly obvious, barring a pretty exciting turn towards the end.

That’s not really the central nuisance that makes, “Warlords” a bit of a frustrating slog though. The real problem is that this episode’s constant and unnecessary shifting between timelines takes a narrative that could have been somewhat intriguing, and instead makes it needlessly sloppy. The structuring of this episode is an absolute mess, bordering on a narrative car crash at worst. This is because the show is awkwardly trying to juggle establishing a new community, leading Maggie and her forces to said new community, pitting Maggie against the Commonwealth’s interests in earnest, and setting the foundation for Alexandria’s people to also end up in conflict with the Commonwealth, or at least Hornsby’s side of it, all within one episode.

Regarding this week’s new community, it’s an apparently religious, militant community of about 40 based within an apartment complex, known simply as ‘The Complex’. There really isn’t much to them on the surface, and despite an intimidating display of skull trophies on Complex leader, Ian’s shelf, it’s not long before Ian is killed by Carlson, who, surprise, is a Commonwealth assassin. Carlson at least feels like a fun antagonist for the short term though, existing as a more unhinged Commonwealth agent that initially appears to be just as begrudgingly roped into Hornsby’s Complex mission as Aaron and Gabriel were. Eventually though, Carlson being revealed as a violent psychopath that appears to relish interrogating and killing the Complex’s citizens over a raided gun transport makes for an enjoyable twist, one that injects some of that classic survivor terror into the otherwise civilized Commonwealth. 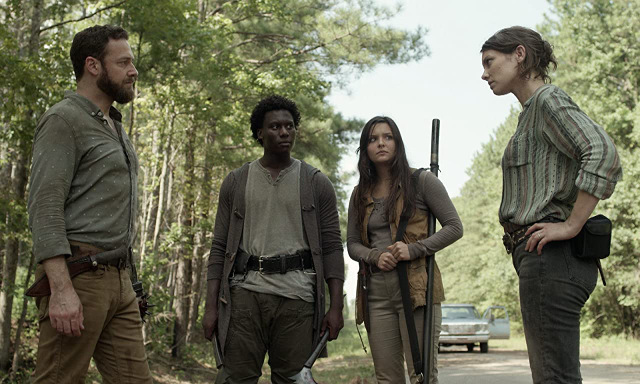 Gabriel also ends up being captured during Carlson’s takeover of the Complex, though Aaron manages to get away, and eventually reunite with Maggie. Had this episode committed to simply opening with Aaron making contact with Maggie’s forces, and warning of some great Commonwealth-related disaster that would then become the main episode’s exclusive focus, the time-jumping narrative probably would have been a lot more palatable. Sadly though, this early Aaron tease only serves to drag out the early establishment of the Complex, because viewers will be ahead of the flashbacks, knowing from the jump that Carlson is crooked, and that he obviously did something very bad at the Complex, something that’s now going to present a problem for Maggie’s people.

On that note, we also get the next major tease for The Walking Dead’s latest upcoming spin-off series, Isle of the Dead in this episode, thanks to the unexpected return of Negan. As it turns out, Negan joined the Complex, and was away with another of its citizens during Carlson’s takeover. Negan was also the one that sent the dying messenger to Maggie, which is another good twist, and one that nicely indicates just how desperate Negan and his people are under the threat of the Commonwealth. This is admittedly a workable excuse to bring Maggie and Negan back into something of an alliance on its own, considering that these two are going to headline Isle of the Dead next year, but it doesn’t do any additional favours to a narrative that already suffers from a strained focus. To make matters worse, we don’t see an actual payoff to Negan calling Maggie for help yet either, as this episode rather awkwardly ends before Maggie and her people can truly move against Carlson.

“Warlords” has some cool moments, but it’s a bit of a mess overall. The attempts made to finally set up a true battle against the Commonwealth are pretty uneven here, even if it is nice to bring Negan back into The Walking Dead’s ensemble. Worse than that however is the needless and tiresome jumping between timelines, as the show struggles to build a compelling mystery, only to present a sloppy and confusing series of events that don’t intrigue as much as they annoy. Perhaps the apparent mandate of teasing the premise for yet another upcoming spin-off series is also to blame here, since Maggie and Negan must inevitably come together for Isle of the Dead, just as this season’s earlier Reaper storyline felt like it only existed to lay groundwork for the currently-untitled Daryl/Carol spin-off series that’s also supposedly premiering next year.

Either way, this latest detour outside of the Commonwealth’s walls represents another bumpy middle chapter for The Walking Dead’s final season. Despite its extended length, it seems like the season is having trouble efficiently developing the Commonwealth as a threat to the protagonists, even if the Commonwealth’s unpredictable morals remain engaging enough to keep enduring fans watching.

The Walking Dead 11.13: "Warlords" Review
The Walking Dead starts developing a true Commonwealth threat with a frustratingly messy outreach storyline this week, as Aaron and Gabriel wind up roped into a mission that ends in disaster.
THE GOOD STUFF
THE NOT-SO-GOOD STUFF
2022-03-26
70%Overall Score
Reader Rating: (0 Votes)
0%