Jennifer McMahon may not be the type of transcendent, iconic name that Stephen King, Dean Koontz and Clive Barker happen to be, but she is one of today’s more talked about horror writers. In fact, I often see her novels — The Winter People and The Invited, specifically — recommended online. I’ve only read one of the two, though, and found that while The Invited started off really well its last however many pages were kind of underwhelming.

I did read part of The Drowning Kind, though, and liked what I did read before getting caught up in books that were more pressing at the time. It’s something I look forward to restarting, as a result.

This is a lengthy way of introducing the author and her new novel, The Children on the Hill, which was recently released. Having just finished it, I wanted to share my thoughts.

The Children on the Hill is yet another Vermont-based narrative from an author who apparently resides in that under-represented state. It centred upon a small town called Fayeville, which houses a little mental health hospital called the Hillside Inn. A small yellow building with history dating back to the Civil War, and time spent as a hospital for tuberculosis patients, it is now under the control of renowned psychiatrist, Dr. Helen Hildreth, who lives across the dirt road with her two grandchildren: 13 year-old Violet and 9 year-old Eric.

This story is told from more than one perspective, and uses two different, alternating timelines. 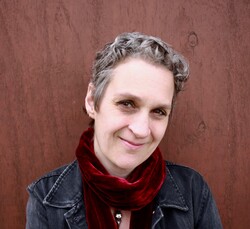 The first is told in third-person, and chronicles Violet and Eric’s life in 1978. Homeschooled and often left to their own devices, they seem like well rounded children who are obsessed with monsters to the point that they’ve written and illustrated their own monster book from the confines of their run down clubhouse in the woods. Their seemingly idyllic life full of hunting monsters, rescuing animals and interacting with the Inn’s patients is shaken up when Iris — a non-verbal young girl with no shared past and lots of scars — moves in with them. Gran won’t tell them who she is, but asks her grandkids to treat the newcomer like their own sister.

This secrecy obviously piques the kids’ interest, and they start to wonder who, exactly, Iris is. This leads to plans to infiltrate the hospital.

The second main timeline, then, exists in 2019. There, we find a grown up Violet who’s become a bit of a celebrity, or at the very least a decently well known monster hunter. However, despite taking part in a popular TV show, she lives a pretty solitary life in a camper van that she drives across the country, in search of monsters.

This fifty-something version of Vi — who calls herself Lizzy Shelley in an homage to Mary Shelley, who this book was inspired by — isn’t just in search of Bigfoot. In fact, she’s trying to find her sister, whom she believes is responsible for mimicking monsters and kidnapping young girls who are never heard from again. The two communicate through cryptic emails and, thanks to the latest ones, Lizzy thinks Iris is back in Vermont, where a teenage girl has just gone missing from a rented cabin.

Thus, the monster hunter must return home to a state that she’s been avoiding.

There are two other perspectives, one being the monster and the other being snippets of a book that was written about the Hillside Inn and its questionable practices. However, they’re rarely heard from.

This is a dark story, though, and one that contains things that may haunt those who read it. I cannot say much more for fear of spoiling what is a very worthwhile read, but be warned that there’s some difficult subject matter to be found within. The Children on the Hill isn’t scary, but it is disturbing.

Although I didn’t love Jennifer McMahon’s The Invited, I did really like her latest effort: The Children on the Hill. It’s dark and original, and it’s also well written, with characters who have really strong depth. If it interests you at all, I recommend checking it out.

I know that I won’t forget it any time soon.