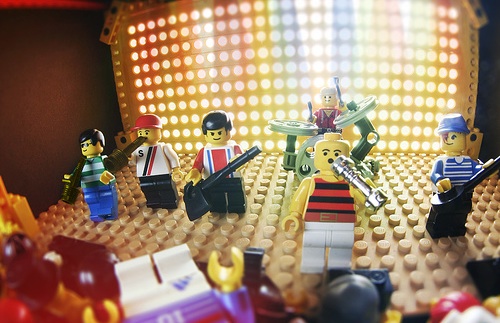 I liken LEGO Rock Band to Mr. Clean Car Wash. When it first came out, it was completely unexpected, but made perfect sense given the company’s cleaning product history. The latest from Harmonix is very similar: merge two brands that are synonymous with all-ages fun, one of which has withstood the test of time, and the other which is proving its longevity as we speak.

LEGO Rock Band is a phenomenal game. And while it is more of the same rhythm game under the hood (I’m not planning on detailing the mechanics; we’ve all played Rock Band and this is more of the same), its attitude towards the music genre has not gone unnoticed. Looking back at the other games in the genre, namely Guitar Hero 3: Legends of Rock, Rock Band I and II, GH: Aerosmith and World Tour, one sees that the majority of the songs are your stereotypical classic rock. And that’s not a bad thing. Unless you want something more recent. And by recent, I mean pop.

LEGO’s mentality with this game, and every other LEGO video game for that matter, was to make the title more kid-friendly. This is no more obvious than with the addition of the “Super-Easy” mode and automatic kick-pedal on the drums, but also with more up to date music that children of the 80s and, heck, even 90s will recognize. Think Good Charlotte, KT Tunstall, P!NK, The All-American Rejects, and Sum 41 and you’ll have a pretty clear idea of what to expect. Of course, there are the David Bowies and Elton Johns and Katrina and the Waves, not to mention Europe’s “The Final Countdown” for the diehards.

The package is outrageously appealing. Rock Band plus one of the most famous brands in history certainly makes a great combination, and this year at E3, LEGO Rock Band was second only to Splinter Cell for me in terms of favourite games.

Here’s the deal: LEGO Rock Band is really a track-pack. The graphics have been given a change, rather than a facelift, and overall, that means this is priced just too high. With that said, if you have any inkling towards wanting to play these songs, buy the game. At the full $60 price tag, it doesn’t require an original Rock Band to play as the track-packs do, but there isn’t enough new to buy this one if you’re just looking for something sort of new in the Rock Band universe. There isn’t anything fancy like triple-harmony vocals or sweet LEGO-Rickenbockers. Rent it and get it out of your system and if you find yourself yearning to play the new songs, do yourself some justice and pick up a copy. Just one caveat: don’t turn on “automatic kick pedal” mode, because trying to get out of it is a nightmare. You will think you’re a God on the drums with the computer pumping the bass for you, but when you have to do it yourself, the game completely changes. Rock on Brickheads! 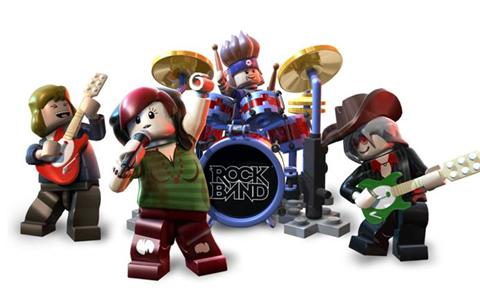