Uncharted: Golden Abyss is a PlayStation Vita title we peeped back at E3 2011 when the console was given its real introduction to the public (i.e. not shown behind a sealed glass case). So is it the launch title everyone has been waiting for? Is this the way to do a portable Uncharted game or just a half-assed attempt at a gratuitous launch title?

Buying a Vita without buying Uncharted: Golden Abyss would be like buying an Xbox without Halo or a Nintendo console without some variation of Mario or Zelda. You just don’t do it. And there is a great reason for it: these games are staples, and they’re staples because they’re incredible. If you bought a Vita with more than one game, please put Uncharted in the system first and play through it before you touch anything else. It’s going to amaze you in a bunch of different ways, moreso than any other launch title out there. 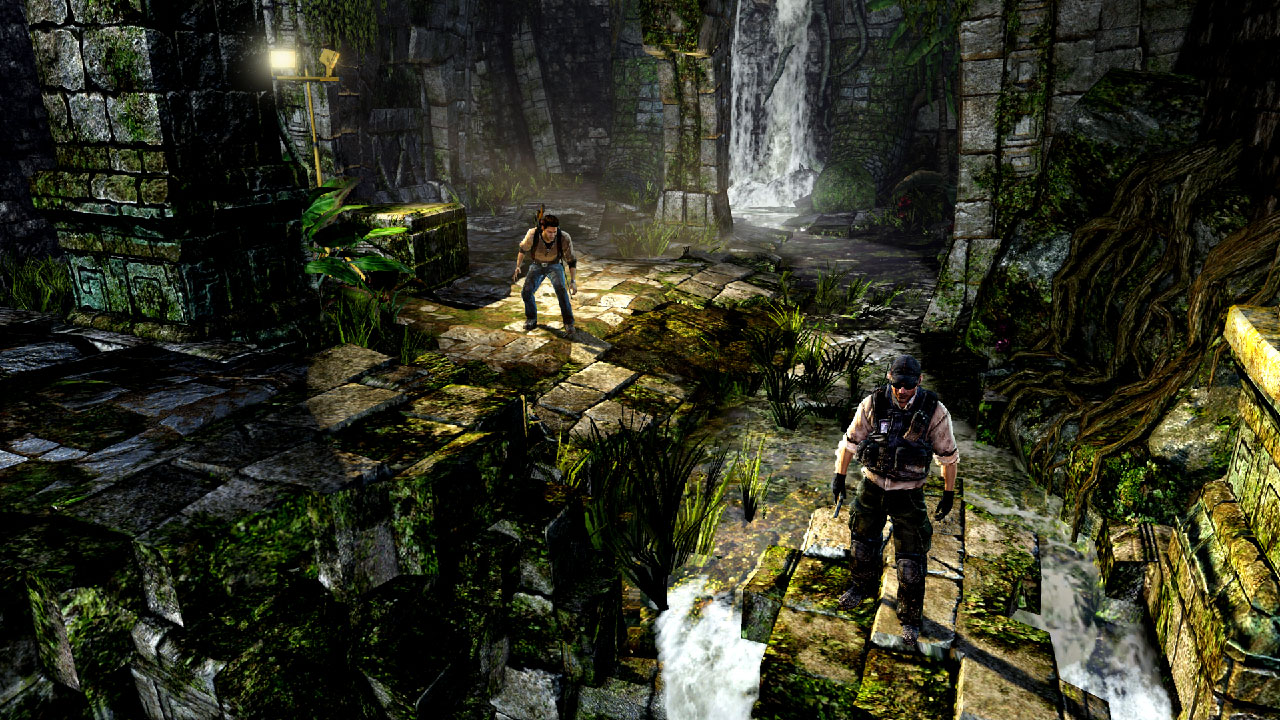 First off, the graphics look incredible. Lick the screen, kick you in the crotch fantastic, even. You can make out every little wrinkle and ridge in Drake’s shirt, tiny stitching and leather details on his holster, and an incredible amount of depth in the amulet that gets thrown around the game every few chapters. Not only that, but this level of detail applies to every single thing in the game from the enemies to other characters, from the cliffside rocks to the trees. Water also looks drinkably gorgeous with some of the best water physics I’ve seen on any game ever, let alone on a portable device. Dust particles even looked amazing, and that is something that most people might not notice. It isn’t given much attention, but when Drake climbs some walls and his hand slips, tiny puffs of smoke are skirted up and minuscule rocks fall from the cliff, and these tiny, almost subconscious details, are what really sets this title apart. One thing is for sure, the Vita’s got power as it manages to push all this out at a smooth-as-butter 60 frames per second without a drop of hesitation.

Golden Abyss is a launch title for Vita, so SCE Bend Studio, the game’s developer, was probably forced to use some of the new technology in the handheld to show off just what it can do. These things usually turn out to be pretty gimmicky (think Nintendo Wii and waggling the Wii Remote incessantly because the controls were just tacked on), but in Uncharted, everything has a place and they just plain work. Page turns using the touchscreen actually feel like a really old, thinly-paged notebook – the kind you might find in an old bible, for example. The sound when you flip the page is very realistic, and this touch, the quality even in the menu system, adds to the experience of being Nathan Drake.

In game, you’re using the front touchscreen to “paint” across cliff edges and up ropes to show Drake the path to take. It’s remarkably intuitive and makes a lot of sense. When you take a picture or whip out your sniper rifle, the back touch pad becomes your zoom and scope control, which actually makes it really easy and let’s you keep your finger on the trigger whether you’re shooting some beautiful scenery or an ugly guy with an assault rifle trying to make mincemeat of your eyeballs. There are also about a dozen charcoal-rubbing moments where you use the touchscreen to, well, do a charcoal rub of an engraving. They were interesting the first time around, but I lost interest by the eighth one or so. Either way, an interesting use of the technology that I hadn’t seen before.

Probably my favourite use of the Vita’s hardware comes from my least favourite piece of the Vita’s hardware: the camera. About midway through the game, you come across a piece of what appears to be blank parchment. Upon closer inspection, you notice something is actually on it, and holding it up the light is the trick to reveal it. But I don’t mean the light in the game, I mean an actual light. The camera on the back of the Vita is obviously sensing how much light is pouring into its lens and, depending on how bright it actually is affects how quickly the image appears on screen. Sure, this could be pulled off by any device with a camera, but the fact is that it hasn’t before, and that’s what makes Uncharted awesome. It’s worth the price of admission for this ten second puzzle alone. Why? Because when a developer has a crazy clever idea like that, they deserve all the recognition possible for it. Amazing stuff, Bend!

Uncharted: Golden Abyss is also a long game. It’s actually a looooongggg game. There were multiple moments where I thought, “Oh, it’s over now. Well, that was a good run.” At about five hours in, however, up popped up a notification: “42% complete.” What? Wow, okay so there is still plenty to do. And there was. At the end of it all, I sunk just over nine hours into the game by my estimation, although with my playing on the bus and in taxis, it may have been significantly higher without my realizing it. For a game of this calibre, nine hours is incredible, especially considering Uncharted games tend to average just under eight hours, and this is a portable version of the franchise to boot.

Something that Golden Abyss isn’t is a remake. Sony could have easily re-released the original Uncharted: Drake’s Fortune on the Vita, slapped on some touchscreen controls, and called it a day. However, they took the path less travelled and approached the game as a prequel, in a brand new way, with a brand new developer, and the game shines because of it. There is a lot more freedom, but staples like Drake’s attitude and, of course, Sully, are back to lend their awesomeness to the game.

Audio in a portable game has traditionally been subpar when compared to consoles. Again, this is where Golden Abyss absolutely shines. While the dialogue gets more than just a bit corny at times, the fidelity of the audio itself is amazing. The fact that it is completely voice-acted certainly helps, and by all of the same voice actors from the original console series. The music is also incredible, bringing back plenty of Indiana Jones memories with its orchestra and big finales.

So at this point, I’ve droned on and on about everything that is great about the game. However, there are a couple of sour points, so I want to get them out there for you so that you’re not walking into the experience thinking it is the best game ever made. Because it’s not. But it sure does come damn close. In any case, my main gripes really just stem from the fact that the game can be repetitive. Most of the time, it isn’t a problem because there is so much variety in what you do, but the chapters tend to be somewhat formulaic in nature. You’ll start a new chapter, begin exploring, get into a gunfight, find a treasure or two, do a charcoal rubbing or solve a puzzle, and then get into another gun fight, begin exploring again, and so on.

Stuff like that makes it a bit obvious when you can expect some enemies to pop up, but there are still some moments in the game where they come out of the truly unexpected – when you’re hanging on a rope, for example. But after the first time that happens, you learn to expect it a bit more. There is also a fair bit of “You wait here, I’ll find another way around,” to the point that they even poke a bit of fun at the game’s repetition before you’re even a third of the way through. The only other point of repetition is the scenery. For a good 85% of the game, you’re running through the jungle. For another ten percent, you’re underground in a massive cavern, and the remaining five percent is spent running out of a burning and collapsing building. It would be nice to see something out of the ordinary, like Drake walking down a street in Manhattan or something, and while that may sound a little farfetched, it would certainly be better than the constant jungle traversal you’ll actually experience in the game.

Sometimes, you have to use specific controls for certain things – accessing the menu, for example, requires a hit of the Select button and then a tap on the touchscreen – which can get a bit convoluted, but considering they aren’t a normal part of gameplay, you shouldn’t really be put off by this at all. Luckily enough, in this vein, they’ve done away with button-mashing quick-time events and made it very obvious that specific swipes on the touchscreen are the way to do things in Golden Abyss.

And that’s kind of it about what I don’t like about the latest entry in the Uncharted series. The puzzles could offer a bit more challenge, but I’m not one who likes to get stuck on those things, so I found it the perfect balance for me personally. If you like a bit more challenge in your puzzles, you might find these ones a bit childish, but you’ll appreciate their design nonetheless. They really harken back to point-and-click adventures like Indiana Jones and the Fate of Atlantis from a couple of decades ago. If you’re going to pay homage to a game in a treasure hunting universe, that’s the one to pay it to.

You do use the motion controls throughout the game if you choose, but they don’t get in your way. If your finger is on an analog stick to move around, that takes precedence over the motion control, and things work remarkably fluidly. The only place you can’t change controls is in one floating sequence where Drake has to sway side to side (by way of you tilting the Vita) to avoid smashing into rocks on either side of him. This is actually a riveting sequence, however, and it brings together a lot of the game’s strengths – beautiful scenery, water physics, and Drake’s character model in a position that we don’t see for the rest of the game – to give you a few moments of really exhilarating gameplay that breaks the mould of the game.

I didn’t touch on story much because if you’re reading this review, you’ve probably heard it before: Golden Abyss is a prequel to Uncharted: Drake’s Fortune, the original game in the series. It has a story with a few twists and turns, but nothing you won’t see coming if you’ve played an Uncharted game, or seen any Indiana Jones movie, before. That doesn’t make it bad by any means, just nothing revolutionary in the story department.

Overall, Uncharted: Golden Abyss is a remarkable title. It has a lot of fun, should give you a few laughs, and make your heart flutter. Okay, so not so much on the last one, but there are a few corny romantic moments where you’ll roll your eyes. Golden Abyss is a perfect show-off of what the Vita hardware can do, and I can’t see games looking better than this on a portable system, but the beauty of it is that we’re not even past week one and titles are already looking as great as this. Keep up the great work Sony, and here’s to many successful years of software on the PlayStation Vita!